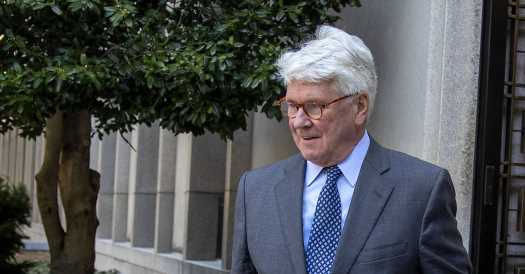 WASHINGTON — On the opening day of a criminal trial testing the sweep of a federal law that regulates lobbying for foreign clients, defense lawyers argued that a prominent Washington lawyer accused of lying about his work for Ukraine’s government was in fact the victim of overzealous prosecutors.

They said the government had no evidence that the accused lawyer, Gregory B. Craig, had ever intended to deceive Justice Department officials who questioned him in 2012 and 2013 about his work for Ukraine. And they argued that the prosecution’s case was based on trivial misstatements he made in a brief letter and a 45-minute interview for which no notes exist.

“Errors are not criminal,” William W. Taylor III, one of Mr. Craig’s lawyers, argued in his opening statement at the trial in the United States District Court for the District of Columbia. Saying that Mr. Craig “has led an exemplary life,” Mr. Taylor added, “If there is one person whose honesty you would put your faith in, it’s Greg Craig.”

Mr. Craig, 74, is an influential Democratic Party figure who served as White House counsel in the Obama administration’s first year. He is accused of making false statements to federal officials who enforce the Foreign Agents Registration Act, a once-obscure law that requires the disclosure of efforts to influence policy or public opinion on behalf of certain foreign clients.

Violations of the law, commonly known as FARA, were central to the investigation of Russian influence in the 2016 election by the former special counsel Robert S. Mueller III, and since then, the Justice Department has sought to vigorously enforce the statute. Mr. Craig’s trial is being closely watched, both because of his renown and because prosecutions related to the law have been so infrequent that its reach is unclear.

The trial will also again test the credibility of Rick Gates, President Trump’s former deputy campaign chairman, whose cooperation with Mr. Mueller’s inquiry helped prosecutors convict Paul Manafort, Mr. Trump’s former campaign chairman, for financial crimes and other felonies. The government is expected to call Mr. Gates, who worked with Mr. Manafort as a lobbyist for the Ukrainian government, to testify against Mr. Craig.

Prosecutors accused Mr. Craig of lying to the Justice Department to conceal information that would have damaged his own reputation and the image of his law firm, Skadden, Arps, Slate, Meagher & Flom.

“He could tell the truth and be forthcoming when the Department of Justice asked him questions about his work for a foreign government, or he could lie and conceal,” Molly Gaston, an assistant United States attorney, said in her opening statement. “We are here today because the defendant chose to lie.”

The trial, which is expected to last about two weeks, turns on Mr. Craig’s interactions with American journalists regarding a report that his law firm produced in late 2012 for Viktor F. Yanukovych, then Ukraine’s president.

The firm was paid nearly $4.7 million to examine the corruption trial of Yulia Tymoshenko, Ukraine’s former prime minister and a political rival of Mr. Yanukovych. Ms. Tymoshenko’s conviction and incarceration had incited a firestorm of criticism in the West and threatened Mr. Yanukovych’s hopes for support from Western governments.

The law firm’s report, which ran about 300 pages, found flaws in how Ms. Tymoshenko’s trial was conducted, but it concluded that the evidence presented in court supported her conviction.

One of Mr. Craig’s law partners advised him that the firm should stick to producing the report and not participate in the Ukrainian government’s effort to help shape American public opinion about it. Otherwise, Mr. Craig could be required to register as a foreign agent under FARA, the partner told him. “Good advice,” Mr. Craig replied in an email that Ms. Gaston read in court.

Nonetheless, she argued, he agreed to help with Ukraine’s news media strategy to introduce the report in late 2012. Mr. Craig’s role, she said, involved “seeding the report with a trusted reporter” whose article would then set the tone for other news coverage.

“The defendant’s personal involvement was important to the plan, because otherwise, Ukraine would not be getting the benefit of the defendant’s reputation,” she said.

On Dec. 11, 2012, she said, Mr. Craig delivered an advance copy of the report to the Washington home of David E. Sanger, a New York Times journalist, and volunteered to be interviewed by him about it. “The Ukrainians have determined that you should be given first look at it,” Mr. Craig wrote to Mr. Sanger.

After The Times article was published, Ms. Gaston noted, Mr. Manafort congratulated Mr. Craig in an email with the subject line “Well done.”

Ms. Gaston said Mr. Craig then falsely told Justice Department officials that he did not initiate contact with any reporters and distributed the report only after it had been officially released. Among other motivations, she said, Mr. Craig did not want to reveal that a Ukrainian oligarch had routed about $4 million in secret payments for the report through an offshore bank account controlled by Mr. Manafort.

But Mr. Taylor, the defense lawyer, said that Mr. Craig had discussed the report with Mr. Sanger and other Western reporters not to advance the Ukrainian government’s news media strategy but to counteract it.

He said Mr. Craig was furious to learn that Ukrainian officials and their Western media agents were telling journalists that the report proved that Ms. Tymoshenko was not the victim of a political prosecution. In fact, the report addressed only the conduct of the trial, not the motivations behind it.

Mr. Craig knew that the Ukrainian government “was putting out false information, and the lies were being disseminated all over the world,” Mr. Taylor said, adding: “Mr. Craig didn’t think that defending the integrity of the report or correcting the fake news” was furthering Ukraine’s interest.

While Mr. Craig might have made minor misstatements to Justice Department officials, he never intended to mislead them, Mr. Taylor said. “The FARA unit never asked questions that would have elicited the information that the government contends he concealed.”