Home » Politics » Trump back in Scotland ahead of Putin talks 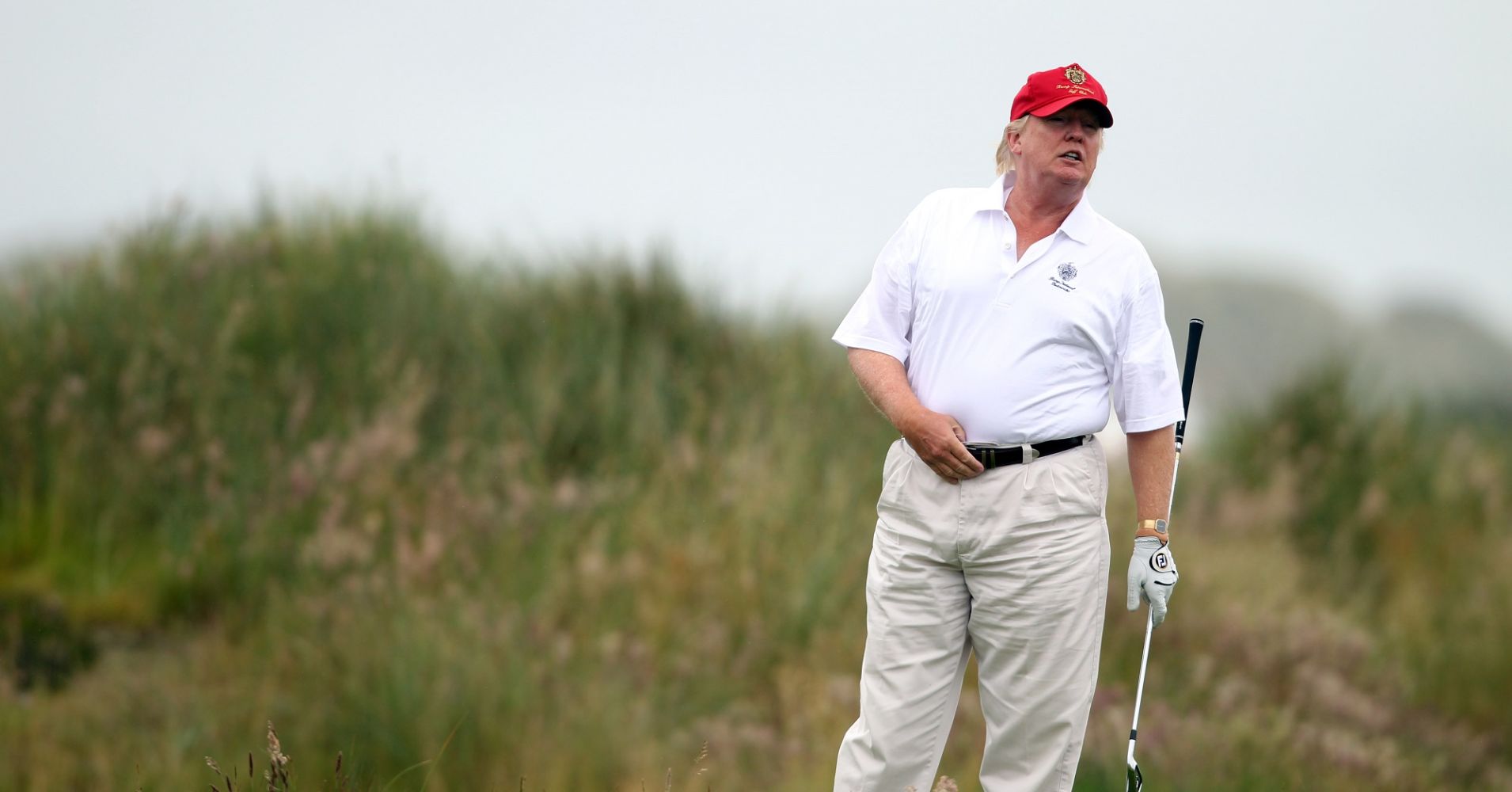 Trump back in Scotland ahead of Putin talks

A roving press conference. Reporters piling into golf carts and running along fairways trying to keep up. A protester scattering golf balls marked with swastikas.

The last time Donald Trump traveled to Scotland was in 2016, hours after the Brexit vote and shortly after he became the presumptive Republican presidential nominee. He created a media maelstrom as he held court with the press, compared pro-Brexit voters to his own supporters and mixed campaigning with business promotion in a way that was signature Trump.

This time, his trip is likely to be less dramatic, as he spends the weekend out of the spotlight preparing for his high-stakes summit with Russian President Vladimir Putin.

Knowing Trump, there’s likely to be some golf on the schedule as well.

Trump has long professed a special connection to Scotland, the land of his mother’s birth. He owns two championship-level golf resorts in the country, including the seaside Turnberry. But ever since he ventured into Scotland a dozen years ago, Trump has been losing money and waging battles with longtime residents, wind farms and local politicians.

Trump’s mother, born Mary McLeod, was born in Stornoway, a place Trump has described as “serious Scotland.” He says his mother adored the queen and the “pomp and circumstance” of events like royal weddings.

“Any time the queen was on television, my mother wanted to watch it,” he told The Sun newspaper in an interview this week.

But Trump has faced endless opposition as he’s worked to renovate the Turnberry resort on the west coast and expand Trump International Golf Links Scotland, in Aberdeen.

David Milne, whose property overlooks Trump International Links, planned to mark the president’s visit the same way he did the last time Trump appeared: flying the Mexican national flag over his house within sight of the clubhouse to protest Trump’s hardline immigration views.

“He is the president of a country that is allies with us and we have to give a certain amount of respect to the office of the president, even if we think the incumbent is a complete idiot,” said Milne. But, he added, “It would be better for a lot of people if he just stayed at home and saved the fuel.”

Anger at Trump has been especially hot in Aberdeen, where Trump’s plans have been mired in controversy from the day the president bought the land in 2006. Neighbors have accused Trump of harassment and bullying to get them to sell land, and a local fisherman became a national hero of sorts when he refused to sell to Trump, despite a $690,000 offer.

The Trump Organization was initially turned down for approval to build on legally protected dunes, but the Scottish government eventually granted permission because of a pledge to create around 6,000 jobs, a five-star hotel with 450 rooms and two golf courses worth 1 billion pounds ($1.3 billion). So far, only one course has been built along with a clubhouse and a boutique hotel with 16 rooms.

Conservationists also claim the course risks damaging an important site of special scientific interest. And a few months before Trump clinched the Republican nomination, he lost a court fight to stop an offshore windmill farm near the North Sea resort.

While Trump likes to brag about the properties — during a press conference at the NATO summit in Brussels he called Turnberry “a magical place” — they’ve also been losing money. A financial report filed by Trump’s company with the British government last year showed it had lost millions of dollars on the two properties and losses had more than doubled in 2016 to 17.6 million pounds ($23 million). It was the third year in a row of losses. Revenue also fell sharply.

Asked about the losses, The Trump Organization emailed a statement that pointed to Turnberry’s positives: “Trump Turnberry is one of the most spectacular properties anywhere on the world and we are incredibly proud of its continued success. The Ailsa, home to four Open Championships including the famous 1977 ‘Duel in the Sun’ was recently listed as #10 in the World by Golf Digest and #16 in the World by Golf Magazine.”

During his last visit to Scotland, Trump created a made-for-TV spectacle as he held a press conference at his course in Aberdeen. Reporters in golf carts followed Trump as he moved from hole to hole, holding court along the way. The event also doubled as an advertisement for the course, with Trump extolled its North Sea views as among “the great sights of the world.”

Trump also spent the visit hailing Britain’s vote to leave the European Union, and drawing parallels between Brexit voters and the anger driving his own presidential campaign. That, despite the fact that Scotland voted against Brexit.

“I love to see people take their country back,” he said at a news conference marking a $200 million-plus rehabilitation of Turnberry.

Several dozen protesters demonstrated outside the resort but were kept at a distance from the candidate and course. But one man wearing a Turnberry fleece briefly interrupted the news conference by tossing a box of golf balls emblazoned with the Nazi logo.

This time, anti-Trump organizers planned a series of protests. Among them: a “carnival of resistance” outside the Scottish Parliament in Edinburgh on Saturday, expected to attract busloads of protesters from across the country. Other smaller demonstrations were also planned, including outside the president’s golf courses. Police Scotland have drafted 5,000 officers to provide extra security at a cost of up to 5 million pounds ($6.6 million).

Kirsty Haigh of Scotland United Against Trump said, “Trump likes to talk up his Scottish connections, but we are going to show that his politics are not welcome here.”