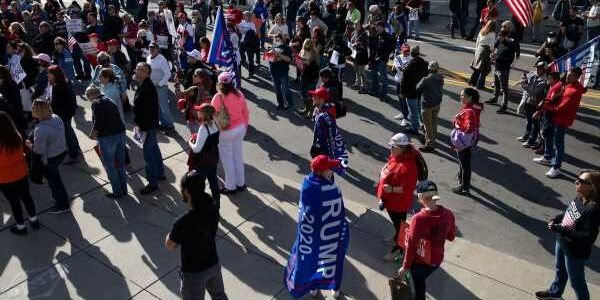 President Donald Trump’s campaign says it’s dropping its Michigan election lawsuit because it succeeded in halting certification of election results in Detroit and surrounding Wayne County, despite the outcome already having been certified in favor of President-elect Joe Biden.

The Trump campaign’s assertion is based on the attempt by two Republican canvassing board members to rescind their Tuesday votes in favor of certification. Democrats say it’s not possible for the two Republicans to walk back their votes. Michigan is due to certify its statewide results on Nov. 23.

On Tuesday evening, the two Republicans, William Hartmann and Monica Palmer, caused an uproar when they initially voted to block certification of the Wayne County vote based on minor discrepancies in the numbers of votes cast and the numbers of people recorded to have voted. The pair’s offer to certify the county without majority-Black Detroit prompted accusation of racism from many voters who attended the board meeting via Zoom. Hartmann and Palmer later agreed to certify the results.

“This morning we are withdrawing our lawsuit in Michigan as a direct result of achieving the relief we sought: to stop the election in Wayne County from being prematurely certified before residents can be assured that every legal vote has been counted and every,” the campaign said.

The move comes as the campaign has seen its legal efforts consistently set back. A similar Michigan state court suit by Trump supporters was dismissed on Friday, and the campaign has faced difficulties with lawsuits in Pennsylvania and Nevada, while GOP backers have seen earlier litigation fail in Georgia, Michigan and Arizona. While Republicans continue to allege a massive conspiracy by Democrats, no such evidence has shown up in court.

The Trump campaign’s notice of voluntary dismissal was filed Thursday in federal court, with attached affidavits from Palmer and Hartmann, who claimed they had been pressured to certify the results and had been misled into believing an independent audit of the Detroit vote would take place.

“I would not have agreed to certify Wayne County” without this assurance, Hartmann said in his affidavit. He also complained that he was “ridiculed by members of the public and other board members” and subjected to “specious claims that I was racially motivated in my decision.”

Palmer told the Washington Post on Thursday that Trump had called her. “I did receive a call from President Trump, late Tuesday evening, after the meeting,” she said. “He was checking in to make sure I was safe after hearing the threats and doxing that had occurred.”

Wayne County heavily favored Biden in the presidential election, giving him 597,170 votes compared to 264,533 for Trump. Biden has been projected the winner in Michigan with a lead of nearly 160,000 votes.

The Trump campaign suit alleged widespread fraud during the ballot count in Detroit’s TCF Center, submitting affidavits from Republican poll observers who reported suspicious activity. In the state court suit dismissed on Friday, a Wayne County judge found the poll-observer affidavits were “not credible” and “rife with speculation and guesswork about sinister motives.”