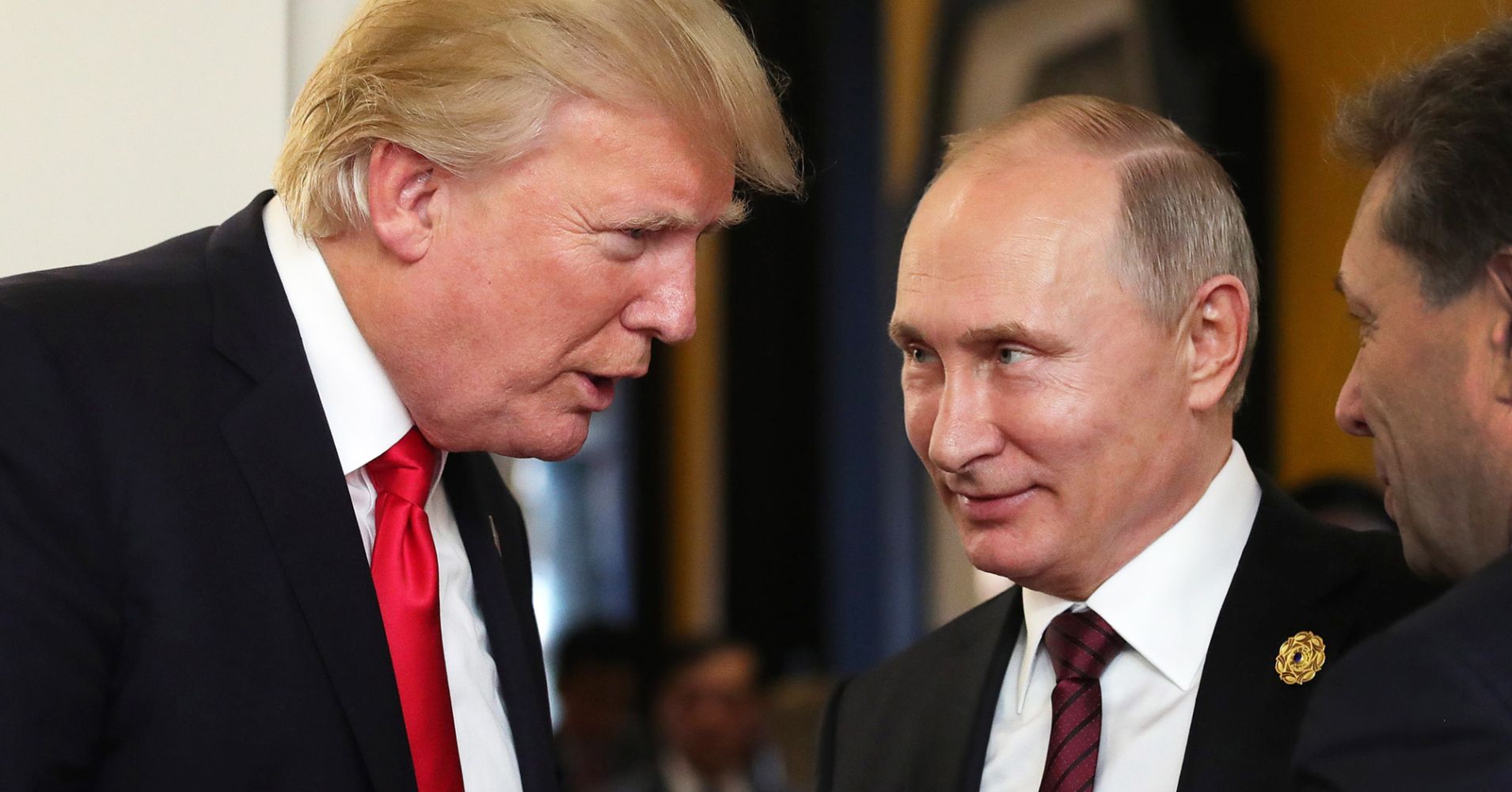 President Donald Trump’s ambassador to Russia, Jon Huntsman, last week ticked off a laundry list of bad acts for which he said Russia must be held accountable when Trump and Russian President Vladimir Putin meet on July 16 in Helsinki.

“Election meddling; malign activities throughout Europe, including the Balkans, UK and Brexit, France and Italy, just to mention a few,” Huntsman said on a call with reporters. He also cited hybrid warfare, a military strategy which combines conventional tactics with coordinated political interference and cyberattacks.

Less than 24 hours after Huntsman took a hard line, Trump did the opposite.

For any ambassador, the task of advancing U.S. interests in a foreign country is often a tricky balancing act. But for Huntsman and Kay Bailey Hutchison, the two ambassadors who will serve as Trump’s right hands during high-stakes summits this week in Helsinki and Brussels, this challenge will be extraordinary.

“It really hangs the ambassadors out to dry when the president creates a completely unpredictable setting,” said a former U.S. envoy who requested anonymity to discuss sensitive relationships.

“When this happens, the ambassador comes across as cut off from his or her capital, and they seem weak and ineffective. As a result, they have less leverage, and by extension the United States has less leverage, with the host country governments,” the former diplomat said.

Before he meets with Putin next week, Trump will attend a NATO summit starting Wednesday in Brussels. His top envoy will be Hutchison, a former U.S. senator from Texas who is now the U.S. permanent representative to the transatlantic military alliance.

NATO has been a cornerstone of global peace and security for nearly 70 years. But Trump has zeroed in on what he calls unfair burden sharing, given that some NATO allies haven’t met agreed upon defense-spending levels.

Speaking to reporters Thursday, Hutchison said the “major overall theme of this summit is going to be NATO’s strength and unity.” Within hours, Trump contradicted her.

European Union countries “kill us with NATO. They kill us,” Trump said during the same Montana rally where he said Putin was “just fine.”

Eschewing any notions of “strength and unity,” Trump said his time in Brussels would be spent delivering a message to NATO allies: “‘You have to start paying your bills.’ The United States is not going to take care of everything.”

In spite of Trump’s heated rhetoric, Hutchison on Friday again emphasized the United States’ commitment to NATO in a tweet. “NATO membership is more than a defense agreement. It is an ironclad commitment to North American & European security that unites us in peace, democracy, & common values,” she wrote.

“We are seeing Russia with maligned activities on so many fronts right now,” she said on CBS’ Face the Nation. “Especially the hybrid area where they are, through social media, sowing discontent and even false information to try to divide our allies and take them away from the West,” she said.

Hutchison also brought up the March poisoning of a Russian double agent in England with a potent chemical weapon, and accused the Kremlin of “supporting a Syrian dictator who is using chemical weapons on his own people to kill even children.” She added: “And it’s just on and on and on … there are so many areas where [Russians] are working against the interests of freedom and democracies and peace in the world.”

By effectively ignoring Trump’s more provocative statements, experts said Hutchison was employing one of the few options available to Trump’s diplomats: Carry on as if Trump were a typical president saying typical things, even when he’s not.

“Basically, it’s framing policy ideas as if the disruptive effect of Trump were not omnipresent,” said Andrew Weiss, a Russia expert at the Carnegie Endowment for International Peace and former director for Russian, Ukrainian, and Eurasian Affairs on the National Security Council staff under President Barack Obama.

This strategy, however, risks highlighting the gulf between Trump’s agenda and those of his predecessors.

“The system is doing what the system does, planning a summit, laying out the agenda. But that method doesn’t turn out well with this president,” said the former high-level envoy who spoke on condition of anonymity. “It almost seems like these ambassadors are planning summits for a president we don’t have.”

Another option available to Trump’s diplomats is to try and smooth over Trump’s comments, by suggesting that the differences between what Trump says and what has been U.S. policy for decades is merely a question of semantics.

Trump's 'own way' of speaking

During his meeting with Putin, “the president will drive the discussion on malign activity and election meddling,” Huntsman, the ambassador to Russia, said on the call with reporters Thursday. “He knows the facts and the details and he’s discussed it. We all talk about it a little differently, but the president has talked about it in his own way.”

Trump’s “own way” of talking about Russia’s destabilizing activities, however, is often to downplay them and sometimes even to defend Putin’s actions, or to repeat his false denials.

In November, Trump said he believed Putin’s denial that Russia had waged a massive influence campaign and cyberwar against Hillary Clinton, Trump’s Democratic opponent in the 2016 presidential election.

“He said he didn’t meddle. I asked him again. You can only ask so many times,” Trump said following several meetings with Putin on the sidelines of an economic summit in Vietnam.

“Every time he sees me, he says, ‘I didn’t do that,'” Trump told reporters. “And I believe, I really believe, that when he tells me that, he means it.”

Trump has also privately suggested he backs Russian’s claim to Crimea, the region of eastern Ukraine illegally annexed by Russia in 2014. This claim is strongly refuted by the United States and the international community. But Trump reportedly told his fellow G-7 leaders in May that Crimea “is Russian,” because people there speak Russian.

A month after the G-7 meeting, Trump again repeated the Kremlin’s denial that it interfered in the 2016 presidential election.

“Russia continues to say they had nothing to do with Meddling in our Election!” Trump tweeted on June 28, before questioning why more attention wasn’t being paid to Clinton’s dealings with Russia.

‘A huge coup’ for the Kremlin

Regardless of what Trump’s diplomats say in public, “the Russians can smell what’s on the president’s mind,” said Weiss, of the Carnegie Endowment. “And that is acting like Russia is a normal country, and we can just turn the page on everything Russia has done since 2014, and the total breakdown of the U.S.-Russia relationship.”

For the Kremlin, he added, Trump’s approach is tantamount to “a huge coup. They didn’t have to trade anything for it.”

Indeed, Trump says he will adopt a flexible approach to key issues in his talks with Putin, in the hopes of creating more opportunities for future cooperation between Moscow and Washington.

But according to Weiss, this friendly approach carries serious risks for the United States.

“Anyone who thinks being nice is going to change Russian behavior, or that flattering Putin is going to have any impact at all on his decisions, that person is making a serious miscalculation,” Weiss said.

Yet as the president departed for Brussels on Tuesday morning, he seemed more relaxed about his summit with Putin than he was about the rest of his meetings in Europe.

“Frankly, Putin may be the easiest of them all,” Trump said.