Trumpworld is at war over who controls the golden ticket — a Donald Trump endorsement.

Since late February, a small band of insiders led by Donald Trump Jr. and former campaign manager Bill Stepien have established themselves as gatekeepers for who gets endorsed and how fast those endorsements roll out, according to interviews with more than a half dozen Republican strategists and Trump advisors.

“One month ago, there were nine ways to win an endorsement. Now that’s being winnowed down to just one,” said one Republican working on 2022 congressional midterm races.

This consolidation of Trumpworld power in the chaotic months since Trump lost re-election have angered the Republicans who supported Trump but are not part of the tiny clique running Trump’s post-White House political operation.

Some Trump loyalists and Republican operatives outside of Trump’s inner sanctum derided the development as an effort by Stepien, in particular, to preserve power for himself. Longtime Trump advisors and others have knocked Stepien and his team for losing the White House and still getting to keep control of access to Trump.

“It’s become a very big source of contention,” said one former Trump White House aide keeping tabs on the endorsement struggle. “It is ridiculous that someone who didn’t do a good job in the campaign is now out there leading the charge and getting all the rewards after doing a s****y job.”

At stake is control of the most valuable item in Republican politics at the moment: Trump’s official seal of approval.

With a single, emailed statement from his nascent political action committee, Save America, Trump could decide the fate of ambitious Republicans running in competitive House or Senate primaries.

Trump remains extremely popular among most Republicans despite his role in the January 6 attack on the US Capitol and subsequent impeachment trial, during which he was acquitted.

“President Trump’s endorsement is the most important in political history, as evident by more than 20 senators and 50 House members calling or traveling to Mar-a-Lago just since January to seek his support,” Trump senior advisor Jason Miller said in a statement to Insider.

Graham’s trip secured endorsements — and the implicit protection from costly Republican primaries that come with the Trump endorsement — for incumbent Sens. Jerry Moran of Kansas, Mike Crapo of Idaho, and John Boozman of Arkansas.

Since leaving the White House, Trump has endorsed 10 candidates in all. His support has ranged from former White House press secretary Sarah Hucakbee Sanders, who is running for governor of Arkansas, to Julia Letlow, the widow of former Louisiana Rep.-elect Luke Letlow, who is running in Saturday’s special election to fill his seat. 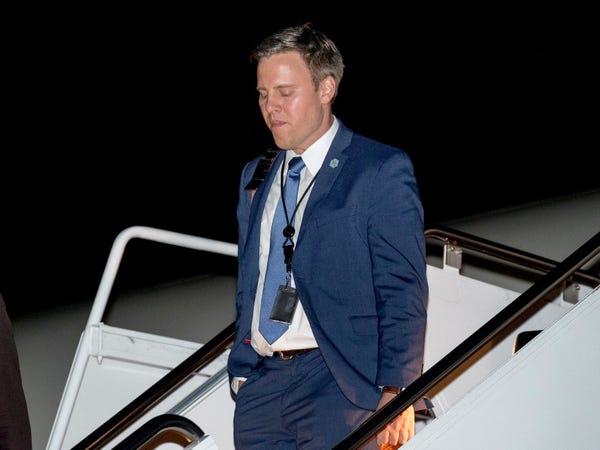 Republicans supporting the Trump Jr. and Stepien team say they’re right to establish a formal process for deciding how Trump doles out his blessings.

“Nobody’s blocking other people from going to Trump,” said one Republican supporting the Trump Jr. and Stepien team. “If Corey (Lewandowski) wants to call the president, he can walk right in. If (RNC Chairwoman) Ronna McDaniel wants to call, she can get through.”

Trump Jr., Stepien, and their small team have urged Trump recently to delay jumping into competitive races, particularly in states such as Ohio, where multiple Trump supporters are vying to win the Republican Party nomination for US Senate.

The top Republicans angling for this seat, which Sen. Rob Portman is vacating, are all expected to descend on Trump’s Florida residence at Mar-a-Lago on Wednesday.

But Trumpworld will instead be watching to see who can get around Trump Jr. and Stepien to lobby Trump directly for his approval.

More such Trump meet-and-greets could come soon, with at least three other Republican senators, including Richard Burr of North Carolina, Pat Toomey of Pennsylvania, and Richard Shelby of Alabama, having decided against seeking re-election in 2022.