Home » Politics » Trump Lands in Britain, Where the Queen and Protesters Await 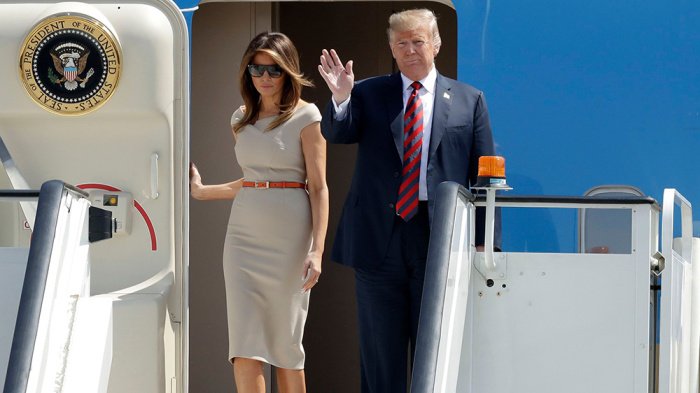 Trump Lands in Britain, Where the Queen and Protesters Await

Donald Trump landed in Britain on Thursday for an official visit that will involve a meeting with the prime minister, tea with the queen and the prospect of thousands of protesters who have vowed to dog him throughout his tour of the country.

The four-day trip is not a state visit, which entails a level of pomp and circumstance, including an open-top carriage ride with Queen Elizabeth II and a lavish dinner at Buckingham Palace, that Trump would no doubt enjoy. Although the British government has extended an invitation to Trump for a state visit, no date for it has been scheduled, reportedly because of the outrage it has stirred up among many residents and politicians from all parties.

Trump arrived Thursday afternoon at Stansted Airport, outside London, after attending the NATO summit in Brussels. His official schedule calls for him to meet the U.S. ambassador, then journey to Blenheim Palace, Winston Churchill’s ancestral home near Oxford, for dinner with Prime Minister Theresa May.

He is to have tea with the queen at Windsor Castle on Friday, hold a tete-a-tete with May at the prime minister’s official country home, Chequers, and then depart for Scotland, apparently to play golf at the Trump resort in Turnberry. Except for the meeting with the U.S. ambassador, all the events are safely outside London, where the biggest shows of opposition against him are expected, including a giant balloon depicting Trump as a diapered baby.

Before departing from Brussels, Trump said he was “fine” with protesters and contended that “I think they like me a lot in the U.K. I think they agree with me on immigration….I think that’s why Brexit happened.”

On Thursday morning, members of Parliament grilled the government minister in charge of policing over the costs of providing security for Trump in a time of deep public-spending cutbacks.

“I love America, and Americans, too. My grandfather was a GI in the Second World War,” Stephen Doughty, a Labour Party lawmaker, told the House of Commons. “This president who is coming is racist, divisive, sexist, and if we weren’t rolling out the red carpet for him in so many locations, they wouldn’t have the costs and pressures that we have on the police.”

Doughty noted that Trump had approvingly re-tweeted inflammatory videos by a leader of Britain’s far-right movement, which drew condemnation from across the political spectrum.

Home Office Minister Nick Hurd said the security measures taken during Trump’s visit were proportionate for a U.S. president. “He’s the democratically elected [leader] of our most important ally, and it’s our responsibility to make sure that this significant and historical visit is policed in the most professional way,” Hurd said.

Trump’s visit comes at a sensitive time for Britain, which is grappling with its negotiations over withdrawing from the European Union. The government is expected to issue a white paper Thursday setting out its vision for the U.K.’s relationship with the EU post-Brexit.