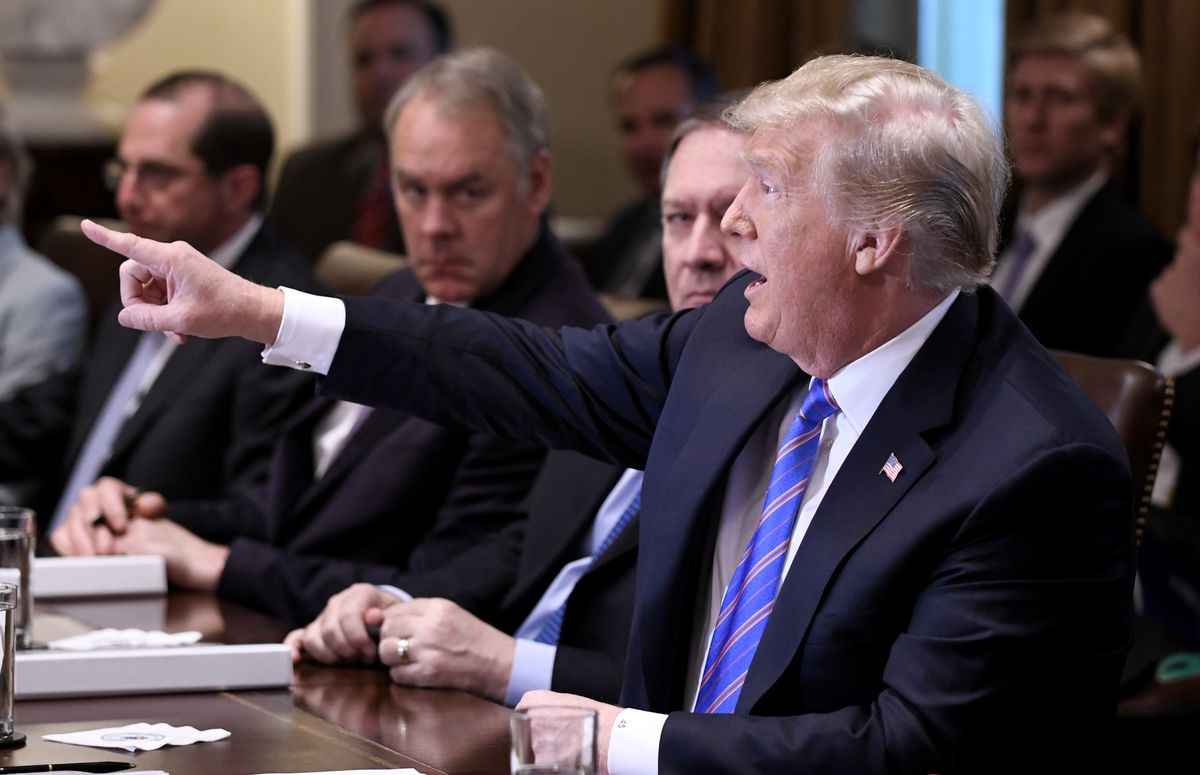 President Donald Trump used the release of a surveillance application on an adviser during his 2016 campaign to renew his claims of a “rigged” FBI investigation, even as a Republican senator said the request to a foreign intelligence court was legitimate.

In response to public-records lawsuits, the government on Saturday released a heavily redacted version of the document that was used to apply for a wiretap of campaign adviser Carter Page. Trump and Republicans have attacked the FBI and Justice Department for relying partly on a dossier written by former British spy Christopher Steele, partly financed by Democrats, in the application to the Foreign Intelligence Surveillance Court.

“As usual they are ridiculously heavily redacted but confirm with little doubt that the Department of ‘Justice’ and FBI misled the courts,” Trump said ina Twitter message early Sunday. “Witch Hunt Rigged, a Scam!”

In anothertweet, Trump said, “Looking more & more like the Trump Campaign for President was illegally being spied upon (surveillance).”

But Democrats have said other information besides the Steele report was used to obtain renewals of the warrant on Page, and Republican Senator Marco Rubio, a member of the Senate Intelligence Committee, said on two Sunday morning talk shows that the FBI did nothing wrong in seeking the surveillance.

“I have a different view on this issue than the president and the White House,” Rubio of Florida said on CBS’s “Face the Nation” on Sunday. “They did not spy on the campaign from anything and everything that I have seen.”

The warrant request to the Foreign Intelligence Surveillance Court in October 2016 called Page “an agent of a foreign power” and said “the FBI believes Page has been the subject of targeted recruitment by the Russian government,” according to the document as released Saturday by the advocacy group Judicial Watch. Referring to Trump as “Candidate #1,” the application also said “the FBI believes that the Russian Government’s efforts are being coordinated with Page and perhaps other individuals associated with Candidate #1’s campaign.”

Page said in an interview on CNN’s “State of the Union” on Sunday that while he had conversations with Russian officials, he wasn’t an agent of the Russian government.

Republican Representative Trey Gowdy of South Carolina said on “Fox News Sunday” that Page “is more like Inspector Gadget than he is Jason Bourne or James Bond,” a reference to two fictional spies.

Gowdy said “we will never know” if the FBI had enough information to put Page under surveillance using only information that excluded the Steele dossier. Representative Bob Goodlatte of Virginia, chairman of the House Judiciary Committee, said on Fox News that the redacted version that was issued doesn’t support the issuing of a warrant.

But the materials released Saturday “underscore the legitimate concern” the FBI had about Page’s activities, said Representative Adam Schiff of California, the top Democrat on the House Intelligence Committee.

“While I’m pleased that these conspiracy theories are finally being put to rest, the release of these materials during a pending investigation should not have happened,” Schiff said in a statement blaming Trump for the initial decision to order the Justice Department to release a “distorted” Republican version of what the application contained while Special Counsel Robert Mueller continues to investigate Russian interference in the 2016 election.

In a tweet, Schiff referred to approval of the original surveillance application and extensions by four different judges, writing, “Looking more and more like the President cannot separate fact from fiction” and “If the president isn’t compromised, why does he continue to act this way?”

Republican Senator Lindsey Graham of South Carolina said on CBS that while Congress needs to closely examine the warrant process, Trump gets the issue “confused” with Russian election interference.

“Mr. President, they meddled in the elections,” Graham said. “Sit down with Congress and the administration and you lead this nation to hardening the 2018 election process before it’s too late.”

Graham also repeated one continuing dispute, a contention by House Republicans that the surveillance application on Page didn’t properly reveal that Democrats — including Hillary Clinton’s campaign — underwrote the Steele dossier and that the partisan connection was mentioned only obliquely in a footnote.

The footnote, though, runs more than a page in length. It says that the person who approached Steele never advised him “as to the motivation behind the research into Candidate #1’s ties to Russia. The FBI speculates that the identified U.S. person was likely looking for information that could be used to discredit Candidate #1’s campaign.”

Despite such motivation for recruiting Steele to compile the dossier, the application said, the Federal Bureau of Investigation found his reporting “to be credible” based on his previous work with the bureau.

— With assistance by Larry Liebert, Miles Weiss, and Ben Brody