Home » Politics » Trump walks out of latest shutdown talks with Democrats, calls them ‘waste of time’

Trump walks out of latest shutdown talks with Democrats, calls them ‘waste of time’

Democrats came out of the latest shutdown talks at the White House on Wednesday claiming that President Donald Trump walked out in a “temper tantrum’ when they repeated their refusal to meet his demand that they agree to fund his border wall and the president then tweeted that the negotiations were “a waste of time.”

Senate Minority Leader Chuck Schumer said that after Trump asked House Speaker Nancy Pelosi whether she would “agree to my wall,” and she said, “No,” Trump said, “We have nothing to discuss,” got up and left.

Earlier Wednesday, with the government shutdown in Day 19, Trump made a rare drive up Pennsylvania Avenue to Capitol Hill Wednesday to shore up support for his border security funding demands with Senate Republicans. 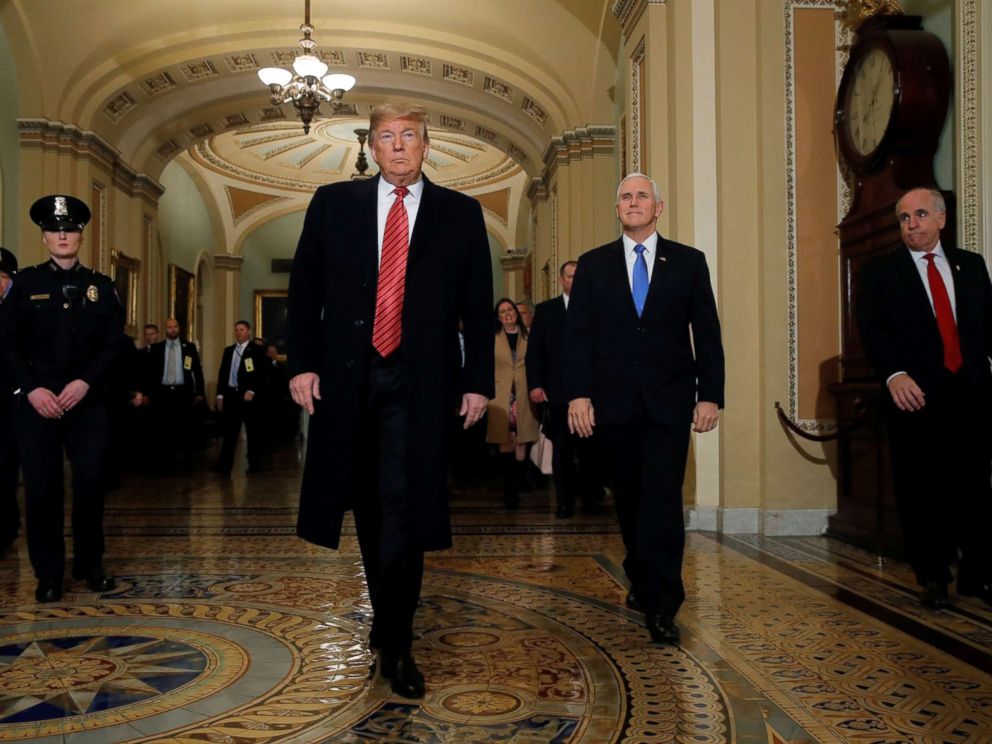 Some Senate Republicans are breaking ranks and saying the president should reopen the government while discussions over border security continue.

Earlier Wednesday, in the Oval Office for a bill signing to combat human trafficking, the president claimed lawmakers from both sides of the aisle could strike a deal and claimed he has “tremendous” Republican support.

“I really believe the Democrats and the Republicans are working together. I think something will happen, I hope, otherwise we’ll go about it in a different manner,” Trump said.

He said it would be “foolish” to give up on border security.

As he arrived on Capitol Hill, he said there was “tremendous” and “unwavering” GOP support. 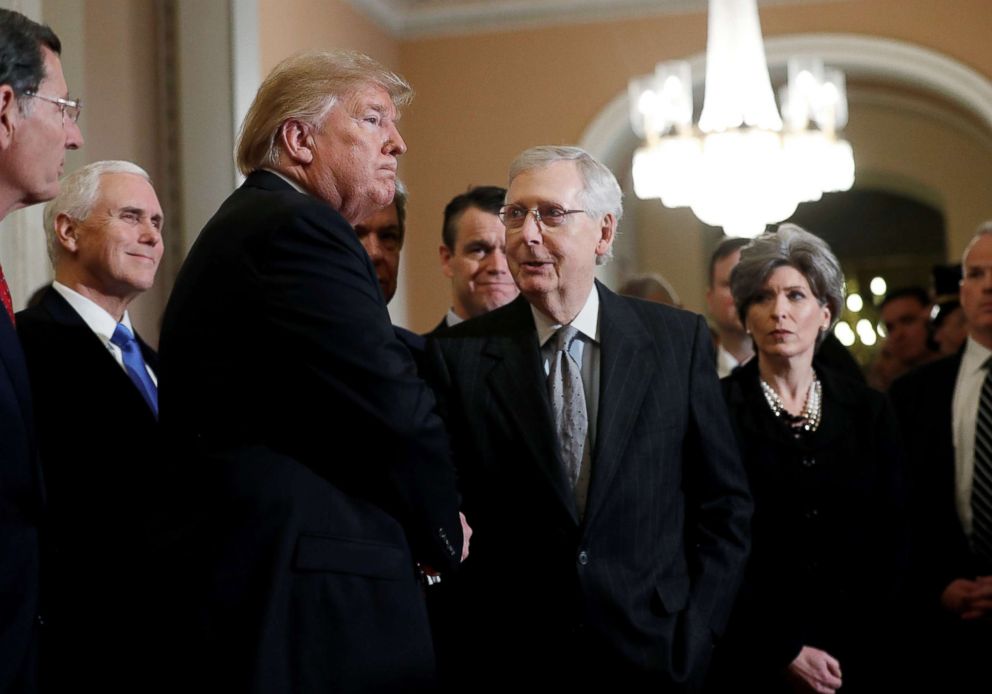 Following lunch with Republicans, the president declared the party is “unified” but added that some members expressed concerns about what he described as “strategies.”

“There was no discussion about anything other than solidarity,” the president said. 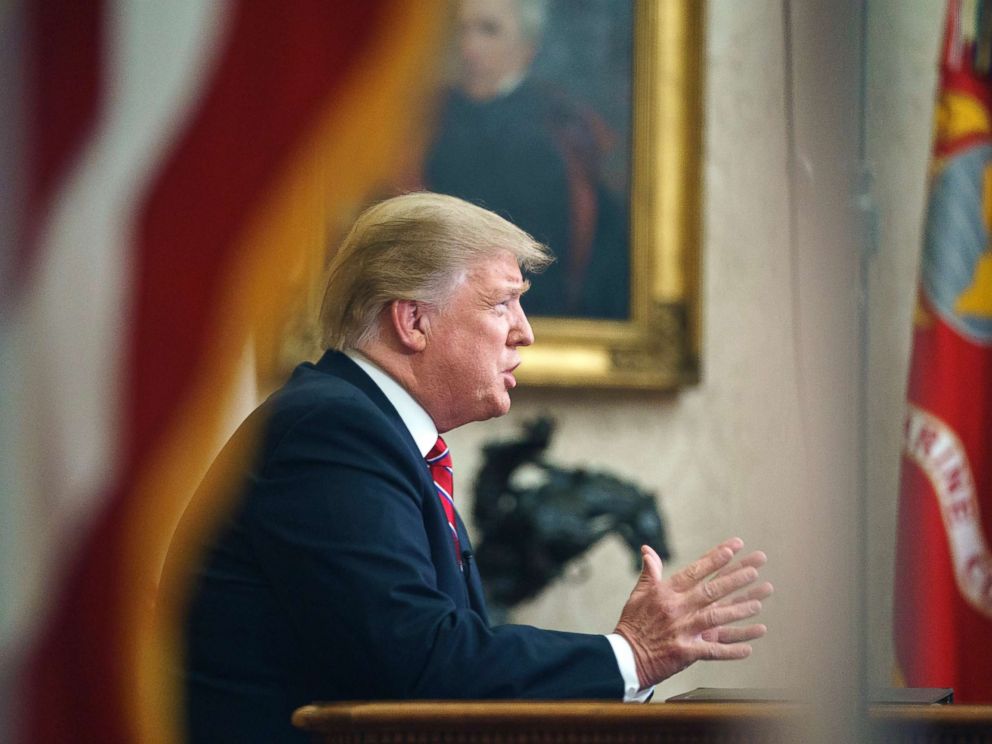 The president’s trip to Capitol Hill is only his fifth public outing since the shutdown began in late December and it follows his first Oval Office address to the nation Tuesday night looking to make his case directly to the public.

The president argued that a “growing humanitarian and security crisis” at the southern border requires the government to put down $5.7 billion for a border wall, in addition to new technology and detention beds. Those demands have put negotiations between Republicans and Democrats at a standstill, as Democrats say they will not capitulate to what they call a “waste” of taxpayer dollars for “an expensive and ineffective wall.” Meanwhile, nearly 800,000 federal employees have been furloughed. 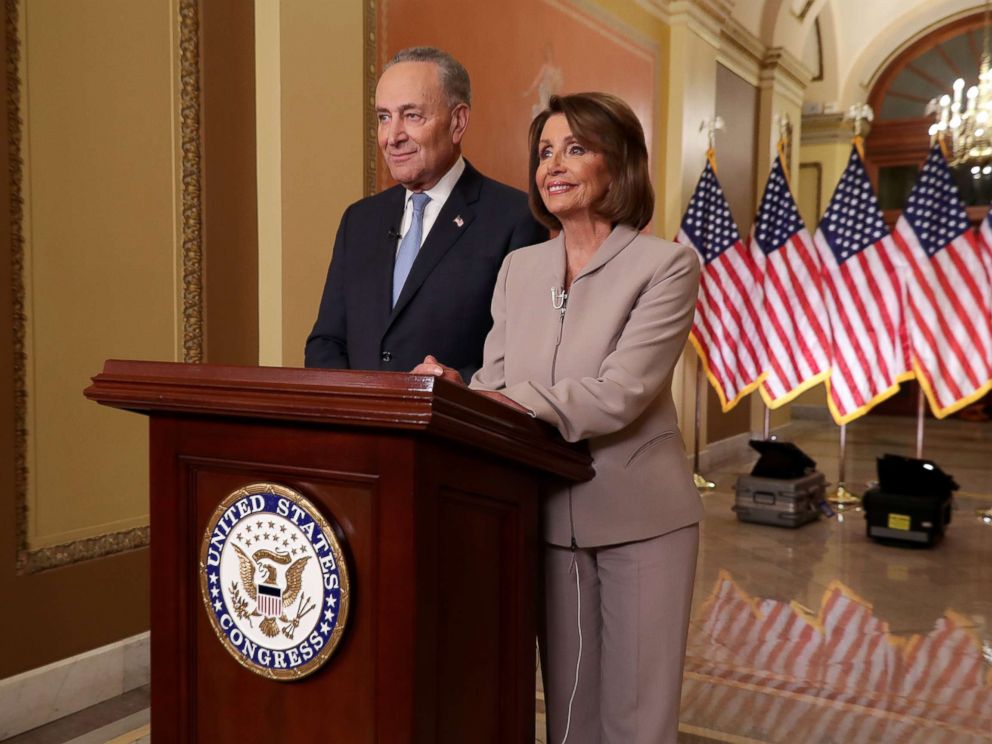 Also on Wednesday, Senate Minority Leader Chuck Schumer and House Speaker Nancy Pelosi held a news conference with federal workers to draw attention to federal workers who may end up missing a paycheck on Friday if the shutdown continues.

Schumer teed up his message for Trump: “The House passed legislation to reopen the government. It’s time for President Trump [and] our Republican colleagues in the Senate, to accept it,” Schumer said. “Our federal workers just want to do their job. It’s time that you do yours.”

Pelosi said Trump “is being unfair” and that his address from the Oval Office last night was “not factual.”

“Last night, the president spouted more malice and misinformation appealing to fear instead of facts,” Pelosi said. “The reality is that the president could end the Trump shutdown and reopen government today, and he should.”

Calling the shutdown a “dark time for America’s workers,” Pelosi urged Trump to “end the senseless shutdown” in over to pave the way for lawmakers to debate border security.

Schumer said the shutdown “ought to end now” and warned that federal workers could miss a paycheck without a speedy resolution to the impasse.

“The president needs to come to his senses and end this shutdown now,” Schumer said. “I don’t think he persuaded a soul with his talk last night. It was same old, same old. Mistruths. Divisiveness.”

Pelosi ducked a question asking whether she’d strike a middle ground on the president’s $5.7 billion request, and said she wants a Republican offer “in writing” to share with the public.

“We have been negotiating,” she said. “The White House seems to move the goalposts every time they come with a proposal. They walk away from it. Pretty soon these goal posts won’t even be in the stadium.”

“The first order of business: open up the government,” Schumer stressed.

Leadership from both parties will join the president for their third meeting in the Situation Room later this afternoon.
Democrats say they plan to once again present the president with the House legislation to reopen the government — neither bills, however, included money for a wall.

Over the weekend, congressional staffers and the White House met multiple times in an effort to find common ground and reopen the government, but no progress was made.

The president has maintained he will declare a “national emergency” to obtain border wall funds if the talks aren’t fruitful.

When asked by ABC News’ Cecilia Vega why the president hasn’t already declared a national emergency, White House press secretary Sarah Sanders said it is ‘certainly still on the table.”

“The best solution is to be able to work with Congress to get this done, you can close a lot of the loopholes, fund border security fully and that’s what we’re hopeful they’ll do,” Sanders said.

On Thursday, the president plans to make a trip to the U.S.- Mexico border in McAllen, Texas, to demonstrate the need for border security. But privately, according to the New York Times, the president has expressed doubts about the trip and his speech would make any difference.

“It’s not going to change a damn thing, but I’m still doing it,” Trump said to news anchors on Tuesday, according to the Times.

Amazon To Convert 125,000 Temporary Workers To Permanent Roles
We and our partners use cookies on this site to improve our service, perform analytics, personalize advertising, measure advertising performance, and remember website preferences.Ok