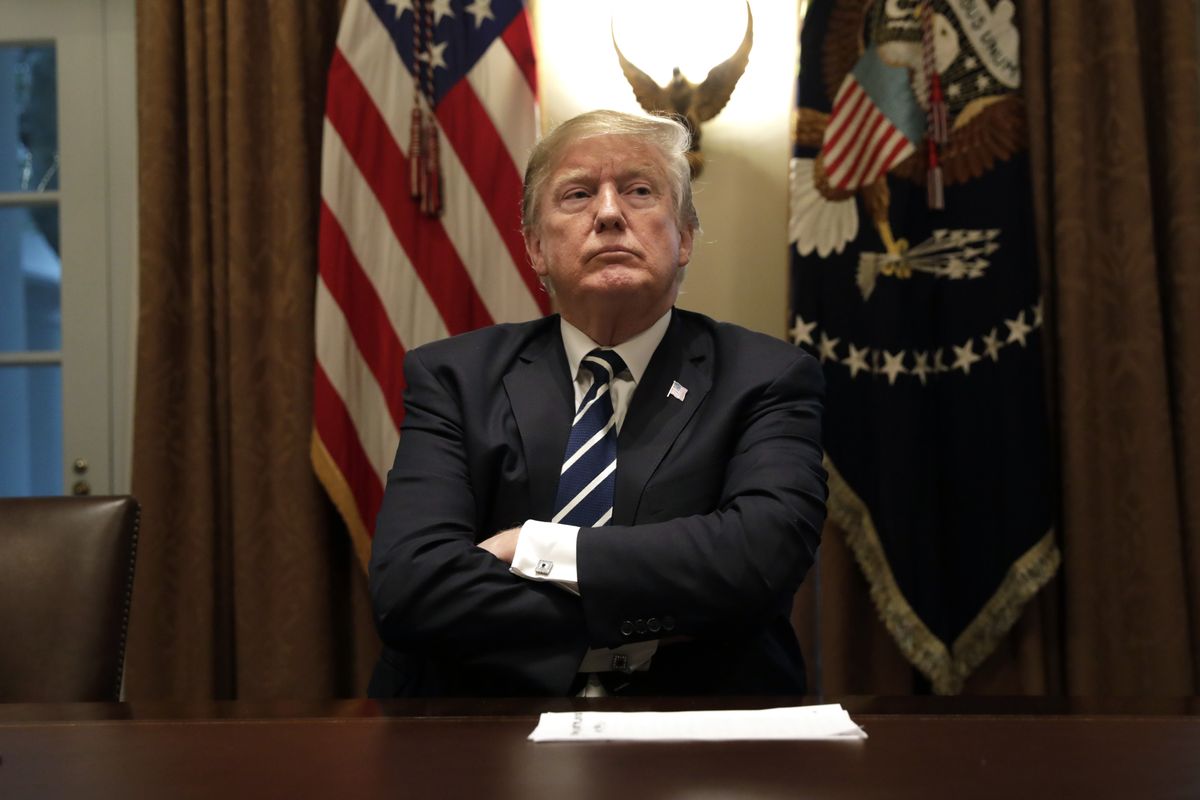 In a Twitter post late Sunday, Trump said, “To Iranian President Rouhani: NEVER, EVER THREATEN THE UNITED STATES AGAIN OR YOU WILL SUFFER CONSEQUENCES THE LIKES OF WHICH FEW THROUGHOUT HISTORY HAVE EVER SUFFERED BEFORE. WE ARE NO LONGER A COUNTRY THAT WILL STAND FOR YOUR DEMENTED WORDS OF VIOLENCE & DEATH. BE CAUTIOUS!”

The threat — similar to ones Trump issued last year in warning North Korea about its rapidly improving nuclear weapons program — risks leading to a speedy escalation if neither side backs down. Traders appeared to take the news in stride, with Brent oil — the global benchmark — trading down 0.1 percent at $73 a barrel as of 12:57 p.m. Hong Kong time.

Trump’s tweet came hours after Rouhani warned the U.S. against threatening the nation’s oil exports and called for improved relations with its neighbors, including arch-rival Saudi Arabia.

The tensions come as the U.S. moves closer to imposing sanctions on countries — including key allies — that don’t eliminate or significantly cut imports of Iranian oil by Nov. 4. That effort follows the Trump administration’s decision earlier this year to withdraw from the Iran nuclear accord, which eased economic sanctions on the Islamic Republic in return for restraints on its nuclear program.

Earlier this month, the other signatories to the nuclear deal met in Vienna to look for ways to make sure Iran still gets the benefits it’s seeking from the accord despite the U.S. threats. Iranian Foreign Minister Mohammad Javad Zarif called for “practical solutions” rather than “obscure promises.” But world powers were unable to offer concrete proposals, and diplomats have warned there may be little they can do.

The back and forth between Trump and Rouhani also came as U.S. Secretary of State Michael Pompeo delivered a speech on Iran policy Sunday in California, in which he accused the country’s leaders of corruption and urged European allies to join the U.S. in a pressure campaign against the Islamic Republic. Pompeo said Iran’s leadership is made up of “hypocritical holy men” responsible for “crooked schemes” that have hurt the country’s economy and citizens.

The top U.S. diplomat added that America stands in solidarity with Iranians and reiterated the November deadline for countries to get their imports of Iranian oil to “as close to zero as possible.” While the administration has said it doesn’t seek regime change, it has repeatedly said that Iran’s leaders don’t have their citizens’ interests at heart.

“While it is ultimately up to the Iranian people to determine the direction of their country, the United States, in the spirit of our own freedoms, will support the long-ignored voice of the Iranian people,” Pompeo said in the speech in Simi Valley, California. The audience included Iranian-Americans, Arkansas Republican Senator Tom Cotton — a leading Iran critic in Congress — and former California Governor Pete Wilson.

Saying that one in four Iranians listen to or watch U.S. government broadcasts, Pompeo announced that the organization overseeing the Voice of America is launching new Farsi-language channels across television, radio and the internet. It was the only new policy initiative Pompeo unveiled.

“For 40 years the Iranian people have heard from their leaders that America is the Great Satan,” Pompeo said. “We do not believe they are interested in hearing the fake news any longer.”

Citing his own travels to North Korea as an example, Pompeo said it’s still possible for the Trump administration to build a relationship with Tehran, but he didn’t seem optimistic that such an outcome was likely. He said Iran must make a series of changes to become a “normal” country, but added: “That I don’t see happening today, but I live in hope.”

Pompeo sought to portray his message Sunday in terms of good-versus-evil, as a major moment in history. He cited President Ronald Reagan’s 1982 Westminster Speech in which he challenged the Soviet Union and warned that its ideology would be left on the “ash heap of history.”

He also repeatedly cast sarcastic aspersions, mocking the head of Iran’s judiciary and the interior minister, as well as Ayatollah Ali Khamenei, who he said controls a $95 billion fund used to benefit the Islamic Revolutionary Guard Corps.

“The level of corruption and wealth among regime leaders shows that Iran is run by something that resembles the mafia more than a government,” Pompeo said.

The administration believes that a new maximum-pressure campaign will work with Iran just as Trump and other senior officials believe that the sanctions regime against North Korea drove that country’s leaders to the negotiating table.

A big difference between the two countries is Iran’s oil. It exports hydrocarbons to countries around the world, including China and India, as well as U.S. allies Japan, South Korea and Iraq.

The administration will have to decide how hard to enforce its sanctions. Pompeo and U.S. Treasury Secretary Steven Mnuchin have told European leaders they won’t get waivers. But other countries, such as Iraq, are major importers of Iranian natural gas, and sanctions could strain alliances the U.S. seeks to maintain.

— With assistance by Golnar Motevalli