Home » Politics » Trump wasn't invited to McCain's funeral, but his presence loomed large as political heavyweights praised McCain for rising above the 'politics of fear'

Trump wasn't invited to McCain's funeral, but his presence loomed large as political heavyweights praised McCain for rising above the 'politics of fear' 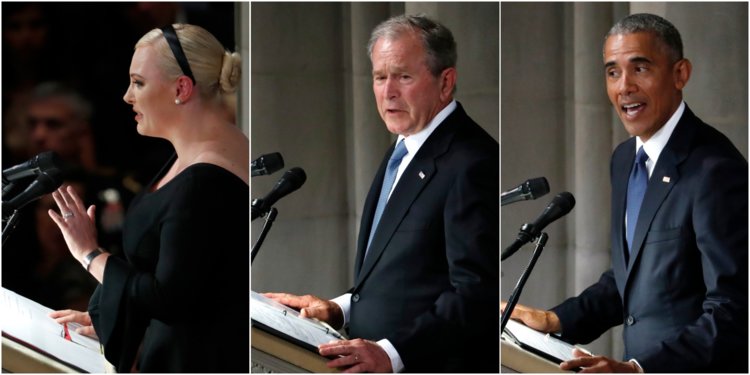 Politicians, military leaders, media figures, and Washington heavyweights gathered Saturday morning at the Washington National Cathedral for the late Sen. John McCain’s funeral, with the exception of President Donald Trump, who was reportedly asked not to attend.

McCain was eulogized first by his daughter Meghan, then several political figures who spoke throughout the ceremony, including former presidents Barack Obama and George W. Bush.

Though none of the speakers mentioned him by name, several delivered pointed remarks about American politics and leadership Trump, who spent the morning at one of his golf courses in Sterling, Virginia. 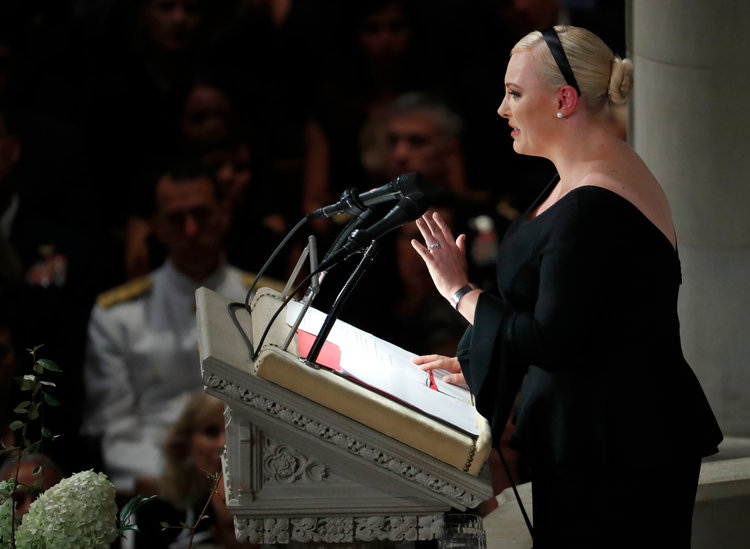 Meghan McCain.Pablo Martinez Monsivais/APMeghan, a conservative pundit and co-host of ABC’s “The View,” delivered a fiery eulogy that did not name, but seemed to take aim at Trump and his past hits at her father’s sacrifice in service to the US Navy.

“We gather here to mourn the passing of American greatness,” McCain said. “The real thing, not cheap rhetoric from men who will never come near the sacrifice he gave so willingly, nor the opportunistic appropriation of those who live lives of comfort and privilege while he suffered and served.”

McCain then zeroed in with a harsh rebuke to Trump’s campaign slogan.

“The America of John McCain has no need to be made great again because America was always great,” she said to thunderous applause.

Obama praised McCain’s love for the people and ideals of America, which he sought to protect despite party lines and ideological differences. Obama admonished politicians who neglect progress for “mean and petty” politics.

“So much of our politics, our public life, our public discourse can seem small and mean and petty,” Obama said. “Trafficking in bombast and insult, and phony controversies, and manufactured outrage. It’s a politics that pretends to be brave and tough but, in fact, is born of fear.” 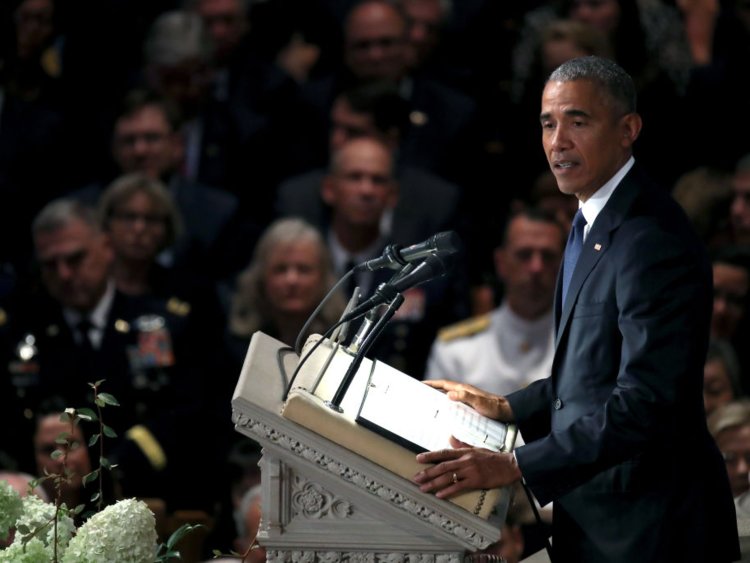 Obama also urged citizens and leaders alike to “do better” in striving to be worthy of the “great inheritance that our founders bestowed” on the country.

“It’s demanded of all of us as citizens of this great republic,” Obama said. “That’s perhaps how we honor him best. By recognizing that there are some things bigger than party or ambition or money or fame or power. That there’s some things that are worth risking everything principles that are eternal. Truths that are abiding.”

Obama added that McCain “believed in honest argument and hearing other views,” and “championed a free and independent press as vital to our democratic debate.”

“He understood that if we get in the habit of bending the truth to suit political expediency or party orthodoxy, our democracy will not work,” Obama said. “That’s why he was willing to buck his own party at times, occasionally work across the aisle on campaign finance reform and immigration reform.”

“Our membership is not based on our bloodline, not what we look like, what our last names are,” Obama said. “It’s not based on where out parents or grandparents came from or how recently they arrived but on adherence to a common creed that all of us are created equal, endowed by our creator with certain inalienable rights.” 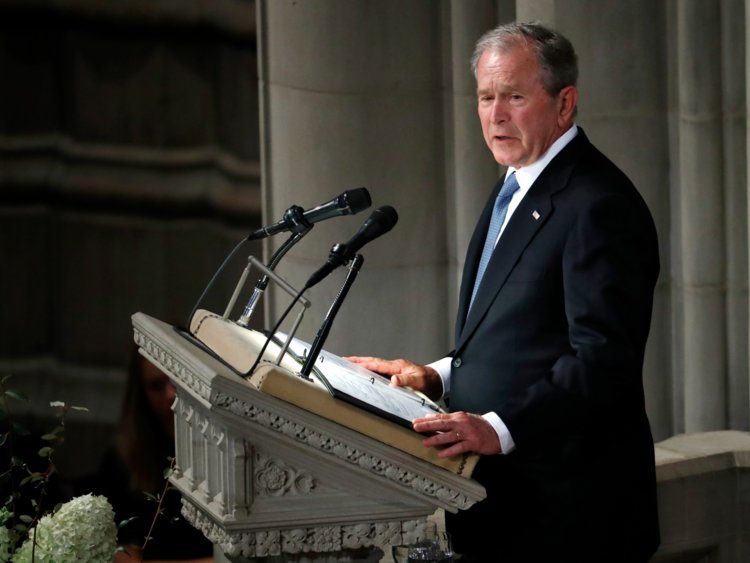 Bush, who defeated McCain in 2000 to become the Republican presidential nominee, praised the late senator’s courage and honesty “no matter whom it offended. Presidents were not spared.”

The late senator was a vocal Trump critic and notably drew the president’s ire when he broke with his party to vote down a Republican measure to repeal parts of the Affordable Care Act. After the vote, McCain hit back against Trump’s pressure on the bill in an impassioned speech to his colleagues, insisting, “whether or not we are of the same party, we are not the President’s subordinates. We are his equal.”

Bush touched on McCain’s aversion to powerful figures, adding “perhaps above all, John detested the abuse of power, could not abide bigots and swaggering despots.”

Bush continued: “He spoke up for the little guy — forgotten people in forgotten places.”

Politicians and military leaders issued glowing statements after McCain’s death. Trump’s response was notably muted, and he has been absent from all funeral proceedings as he hosted an Indiana rally Thursday evening when McCain’s casket arrived in Washington, DC.

During the memorial service, Trump tweeted several times to rail against Canada, the Department of Justice, and NAFTA.

Allies in Name Only? The U.S. and Turkey Slug It Out
Politics
Industies News