Laura Huhtasaari condemned the EU’s plot to stop Britain from taking back control of its borders, laws and fishing waters. The Finnish MEP issued a furious rant against Brussels, as she urged the EU to “look in the mirror”. She pointed out that “UK has already concluded 60 trade agreements,” before adding: “I’m actually envious of the Brits.” 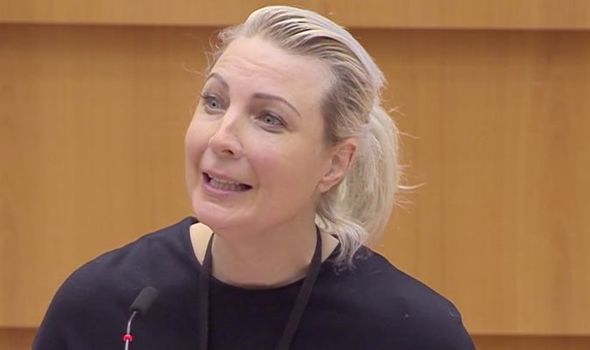 Speaking in the European Parliament, the MEP said: “Why is the EU so unattractive that Norway and Switzerland don’t want to join?

“Why does the UK want to leave? Has the EU looked in the mirror, to actually see what is going on?

“The UK has already concluded 60 trade agreements but it seems impossible for them to conclude one with the EU.

“They want to take back control of their borders, their laws and their fishing waters.”

JUST IN: Belgian MEP warns of ‘horrendous’ impact of no deal on EU economy

Ms Huhtasaari added: “They also want to be free of the EU’s Court of Justice. That’s obvious because the UK wants to be an independent sovereign state.

“Boris Johnson should ensure that Brits get back the things they voted for and the EU has to stop being fearful of that.

“The EU often says, if you leave this EU paradise, then things will go badly for you. We have to stop fearmongering about the future.

“What will happen to the EU in the future and its member-states? Only time will tell.

“I am envious of the Brits because they can actually do something in the world now.”