3 killed in Denver-area shooting, including a police officer and suspect, authorities say

Three people, including a police officer, were killed in a shopping district in a Denver suburb Monday, the latest high-profile shooting in Colorado this year.

Police responded to a suspicious incident in Arvada’s Olde Town Square in the afternoon, Ed Brady, the deputy chief of the Arvada Police Department, said at a news conference.

About 15 minutes later, a 911 call came in about shots fired, Brady added.

A veteran police officer and a suspected gunman were killed in the shooting, according to Brady. A “Samaritan,” believed to have been shot by the gunman, was taken to a hospital and died, he said.

The names of the victims and the suspect have not been released. Authorities didn’t immediately describe the circumstances of the shooting but said no one else is believed to have been involved.

The shooting occurred in the city’s downtown district with shops, restaurants, breweries and other businesses. It’s listed on the National Register of Historic Places and is about seven miles northwest of downtown Denver.

It comes almost three months after a gunman attacked a King Soopers grocery store and killed 10, including an officer. Boulder, where the grocery store is located, is about 20 miles from Arvada.

Last month, about 80 miles south of the city, six people died after a shooting at a Colorado Springs, Colorado, birthday party, police said.

The Arvada officer’s death, just the third in Police Department history, was especially painful after the mass shooting in nearby Boulder, Mayor Marc Williams said. Arvada police helped respond and investigate that attack, he said.

“This is by far the saddest day for our police department,” Williams said.

By evening in Arvada, a large police presence had lined up for a procession, while some residents were lining the street where the procession would take place with flags. 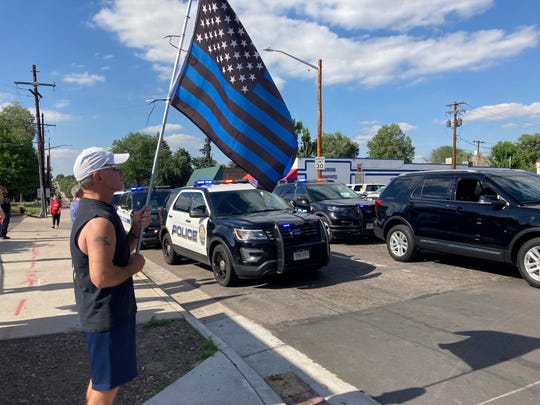 John Garrod, of Arvada, Colorado, stands as a line of about 30 police cars line up for a procession in honor of the officer who was fatally shot on Monday. (Photo: Colleen Slevin, AP Images)