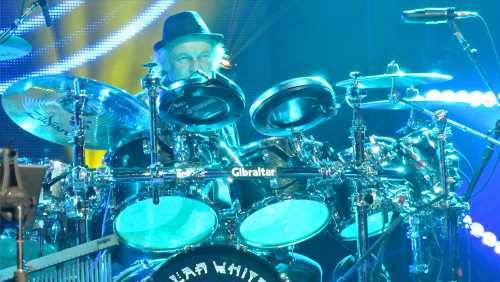 Alan White, the longtime drummer for the British progressive-rock band Yes, died at his home in Seattle today following a brief illness, his family has announced. He was 72.

“Throughout his life and six-decade career,” White’s family posted on Facebook, “Alan was many things to many people: a certified rock star to fans around the world; band mate to a select few, and gentleman and friend to all who met him.”

Though best known for his drumming with Yes – a band he joined in 1972 and with whom he was inducted into the Rock and Roll Hall of Fame in 2017 – White also played with the John Lennon & Yoko Ono Plastic Ono Band in 1969, performing on the hit Lennon singles “Instant Karma!” and “Imagine.” He performed with Lennon, Ono and Eric Clapton in the famous Live Peace in Toronto concert.

Born in Pelton, County Durham, England on June 14, 1949, White began piano lessons at the age of six, according to his family, and began playing the drums at age twelve. Throughout the 1960s, he performed with such bands as The Downbeats, The Gamblers, Billy Fury, Alan Price Big Band, Bell and Arc, Terry Reid, Happy Magazine (later called Griffin), and Balls with Trevor Burton (The Move) and Denny Laine (Wings).

In 1968, he joined Ginger Baker’s Airforce, a new group that also included Steve Winwood. The following year, he received a call from Lennon asking to join the Plastic Ono Band, beginning an association that would include the landmark Imagine album and its title song along with the songs “Jealous Guy” and “How Do You Sleep at Night.”

The Lennon association led to an introduction to George Harrison, who invited White to perform on the album All Things Must Pass, including the single “My Sweet Lord”, released in 1970. White subsequently worked with many artists for the Apple label, including Billy Preston, Rosetta Hightower, and Doris Troy.

White joined Yes on July 27, 1972, and, his family notes, had only three days to learn the music before the group opened its US tour before 15,000 fans in Dallas, Texas on July 30, 1972. With the death of founding member Chris Squire in 2015, White became the band’s longest continuously serving member.

He is survived by his wife of 40 years Rogena “Gigi,” daughters Jesse and Cassi, and other extended family.

‘Ellen’ Talk Show Finale Recap: “When I Started This I Couldn’t Say Gay” In Daytime

A24 Gets ‘Close’; ‘Elvis’ Is In The Building; Latest Reviews, Deals & Video Interviews