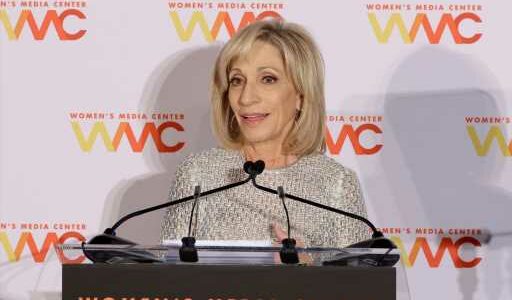 NBC News’ Andrea Mitchell, accepting a lifetime achievement award from the Women’s Media Center, said that there “was a lot left undone” for women in the news media, citing the situation in other countries and also in the United States.

“Now we have women executives at the highest levels in our news divisions and women proving their courage every day in Ukraine,” Mitchell said in her remarks to the group. “But there is a lot left undone for women here, and around the world, not just in China, but in Afghanistan, where women broadcasters, judges and teachers are being driven back into the Middle Ages by the Taliban. In Iran, where women are beaten and jailed and some, killed, for challenging the regime according to human rights advocates. Surely none of us who came of age in the 1960s thought that a right embraced by the Supreme Court nearly a half century could ever be taken away.” She was referring to the court’s decision last summer overturning Roe vs. Wade.

Mitchell also talked of when she first joined NBC News in 1978 and worked with friend and mentor Judy Woodruff, who is about to step down as anchor of PBS NewsHour. Mitchell’s rivals on the White House beat included Lesley Stahl of CBS News and Cokie Roberts of NPR and ABC News.

“We were a band of sisters, competing for exclusives, but commiserating on the campaign plane or Air Force One about husbands, children, boyfriends, aging parents and a host of other challenges at home,” she said.

Of the bosses in that era, she said, “there were always predators, but most were just paternalistic.”

She recalled that when she was NBC’s energy correspondent in 1979 and covered the Three Mile Island near-meltdown, the bureau chief rotated the male correspondents to cover it “to avoid anyone getting too much exposure to radiation, before we knew the extent of the accident.”

She said that she was increasingly frustrated that she was the only one not allowed to cover the story, which was on her beat, and she finally confronted the bureau chief to ask him why.

“He said because I was of child rearing age,” she said. “I thanked him for his concern but assured him that men’s balls were as vulnerable to radiation as women’s ovaries.”

“He sent me the next day and I stayed for months,” she said.

Mitchell, who is chief foreign affairs and chief Washington correspondent and anchors Andrea Mitchell Reports on MSNBC, was also honored last week by the International Center for Journalists last week with their Founders Award.