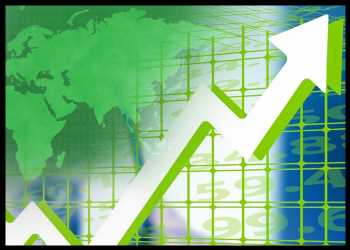 Asian stock markets are trading mostly higher on Monday, following the broadly positive cues from global markets on Friday, as upbeat consumer price inflation and consumer sentiment data from the U.S. raised hopes the US Fed will slow its pace of interest rate-hike trajectory in the coming months. Asian markets closed mostly higher on Friday.

The Australian stock market is significantly higher on Monday, extending the gains in the previous three sessions, with the benchmark S&P/ASX 200 moving to just below the 7,400 level, following the broadly positive cues from global markets on Friday, with gains across most sectors, led by technology stocks and gold miners gold prices spiked.

Among the major miners, Rio Tinto and BHP Group are edging up 0.3 percent each, while Mineral Resources is advancing almost 1 percent. Fortescue Metals is losing more than 1 percent. OZ Minerals is flat.

Oil stocks are higher. Woodside Energy and Origin Energy are gaining more than 1 percent each, while Beach energy is edging up 0.3 percent and Santos is advancing almost 1 percent.

Among tech stocks, Afterpay owner Block is gaining more than 1 percent, Appen is adding almost 2 percent, Xero is advancing 5.5 percent, WiseTech Global is up more than 4 percent and Zip is surging more than 6 percent.

Gold miners are strong. Northern Star Resources and Evolution Mining are gaining almost 2 percent each, while Newcrest Mining is adding more than 2 percent, Gold Road Resources is advancing more than 3 percent and Resolute Mining is surging more than 6 percent.

Among the big four banks, Commonwealth Bank and Westpac are gaining almost 1 percent each, while National Australia Bank and ANZ Banking are adding more than 1 percent each.

In other news, Super Retail Group is soaring more than 9 percent after posting record first-half sales.

Shares in Tyro Payments are surging almost 8 percent after it raised its earnings guidance for the full-year 2023.

Share in Baby Bunting Group are plunging almost 12 percent after it announced a 59 percent drop in profit for the first-half.

In economic news, the total number of private sector house approvals issued in Australia was down a seasonally adjusted 2.5 percent on month in November, the Australian Bureau of Statistics said on Monday – coming in at 9,142. Approvals for private sector dwellings excluding houses tumbled 22.7 percent to 4,423 in November, while overall approvals dropped 9.0 percent to 13,898.

On a yearly basis, dwellings for houses shed 13.4 percent, approvals for dwellings excluding houses dropped 21.0 percent and overall approvals sank 15.1 percent. The seasonally adjusted estimate for the value of total building approved fell 1.5 percent to A$12.388 billion in November, following a 0.4 percent fall in October.

In the currency market, the Aussie dollar is trading at $0.701 on Monday.

The Japanese stock market is significantly lower in choppy trading on Monday, extending the losses in the previous session, with the Nikkei 225 falling below the 25,900 level, despite the broadly positive cues from global markets on Friday, amid speculation that the Bank of Japan will shift from its ultra-easy policy at its monthly monetary policy meeting on Wednesday.

The major exporters are mostly higher. Panasonic and Mitsubishi Electric are gaining almost 1 percent each, while Sony is edging up 0.3 percent. Canon is losing almost 3 percent.

In economic news, producer prices in Japan were up 0.5 percent on month in December, the Bank of Japan said on Monday – slowing from the upwardly revised 0.8 percent increase in November (originally 0.6 percent).

In the currency market, the U.S. dollar is trading in the lower 127 yen-range on Monday.

Elsewhere in Asia, China is gaining 1.3 percent, while New Zealand Hong Kong, South Korea, Taiwan and Indonesia are higher by between 0.2 and 0.9 percent each. Singapore and Malaysia are down 0.4 and 0.3 percent, respectively.

On Wall Street, stocks showed a significant turnaround over the course of the trading session on Friday, recovering from initial weakness to close mostly higher. The major averages climbed well off their early lows to end the day firmly positive.

The major European markets also moved to the upside on the day. While the German DAX Index inched up by 0.2 percent, the U.K.’s FTSE 100 Index and the French CAC 40 Index climbed by 0.6 percent and 0.7 percent, respectively.