President Biden visited a Black-owned flooring company as he continued his weeklong push to highlight the $1.9 trillion economic relief package. 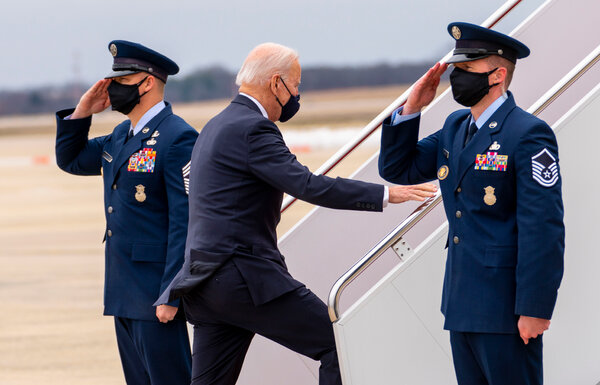 By Stacy Cowley and Jim Tankersley

President Biden dropped by a flooring company in the Philadelphia suburbs on Tuesday to promote an assortment of measures in his $1.9 trillion aid package that are aimed at helping small employers and their workers endure the pandemic’s economic shocks.

But Mr. Biden’s most immediate and sweeping small-business initiative — changes he made last month to the Paycheck Protection Program — has been mired in logistical challenges. With the relief program scheduled to end in just two weeks, the effect of his modifications will be blunted unless Congress extends it.

Last month, Mr. Biden abruptly altered the rules of the $687 billion program to make business owners who employ only themselves eligible for more money. The move was intended to address a clear racial and gender disparity in the relief effort: Female and minority owners, who are much more likely to run tiny businesses than larger ones, were disproportionately hobbled by an earlier rule that based the size of sole proprietors’ loans on their annual profit.

Many companies were shut out of the program because of that restriction, while others got loans as small as $1. The administration switched to a more forgiving formula that lets those businesses instead use their gross income, a change that significantly increased the money available to millions of business owners. Its implementation, though, has been a mess.

The program’s government-backed loans are made by banks. The largest lender, JPMorgan Chase, refused to make the change, saying it lacked the time to update its systems before March 31, the program’s scheduled end date. The second-largest lender, Bank of America, decided to update all of its applications manually, causing anxiety and confusion among its borrowers. Wells Fargo released its revised application on Tuesday and told borrowers with pending applications that they had just three days to reapply using the new form.

Compounding the problem is that Mr. Biden’s change was not retroactive, which has prompted backlash from the hundreds of thousands of borrowers who got much smaller loans than they would now qualify for. Many have used social media or written to government officials to vent their anger.