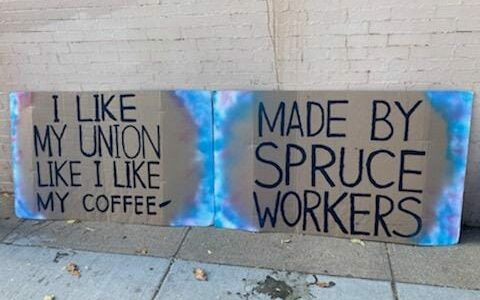 Employees at Spruce Confections in Boulder have voted to unionize, saying they want to improve pay and negotiate for benefits such as health care for the company’s bakers, baristas and drivers.

The National Labor Relations Board confirmed the tally, completed Tuesday, that showed employees approved the union 31-9. Roughly 77 employees were eligible to vote.

Labor activity has increased during the pandemic and the ensuing worker shortages. Workers have won raises and bonuses as employers try to fill jobs, particularly in lower-paying industries like food service and hospitality.

A Starbucks store in Buffalo, N.Y., could become the first one in the national chain to unionize if the NLRB certifies Thursday’s 19-8 vote in favor of a union.

Nic Hochstedler, an organizer with the Bakery, Confectionery, Tobacco, and Grain Millers Union Local 26, said the union had been in touch with the Spruce Confections employees for a while.

“We started this before the labor shortage was a national conversation, but I definitely think it helped, Hochstedler said.

Darby Thorpe, 23, a barista at a Spruce Confections shop, said she supported the union because employees want to have a voice in matters that affect them.

“The big one is going to be health benefits. As of right now, most of my coworkers don’t qualify for the current benefits package that they offer,” said Thorpe, who will be on the committee that will negotiate a contract.

Employees have to work at least 38 hours a week to get health benefits, but many people aren’t eligible, Thorpe added. “Especially on the barista side, our shifts are pretty short. You would have to work seven days a week to meet that threshold.”

Pay is also a top concern across the board, Thorpe said. “Boulder’s a very expensive place to live. I have multiple co-workers who drive in from outside of Boulder to serve the people who live in Boulder.”

Glaudy Almeda has worked at Spruce Confections for six months and said it is one of the best jobs she has had. The 23-year-old, who doesn’t have health benefits, said employees are looking forward to working with the company to make improvements.

“I think we all deserve better,” said Almeda, who works in the warehouse.

The wave of resignations across the country and cases of people not returning from furloughs as the pandemic wears on have raised the notion that it’s an opportune time for labor to flex its muscles. Employers are raising wages and offering bonuses to fill jobs.

Unions have won improved contracts after going on strike. Janitors at Denver International Airport, represented by the Service Employees International Union Local 105, got a $4 hour raise after walking off the job in November.

However, employees who put together the home-delivered meal kits for HelloFresh in Aurora recently voted 166-91 against a union.

In April, workers at an Amazon warehouse in Bessemer, Ala., rejected unionizing.  But the NLRB has ordered a new election at the plant based on objections to the first vote.

Jeffrey Zax, an economics professor at the University of Colorado in Boulder, said the examples of new unions are getting attention because they are rare.

“Ultimately, this is a bit of an odd moment for union activity to increase because the pandemic has placed a lot of market power in the hands of workers without unions,” Zax said.

Times like these are when workers are least likely to think they need the additional protection of collective bargaining, he said.

“If you see employers who are facing union drives and unionization itself,” Zax said, “the first place to look is not to broader trends in the economy but to specifically what’s going on in that workplace.”