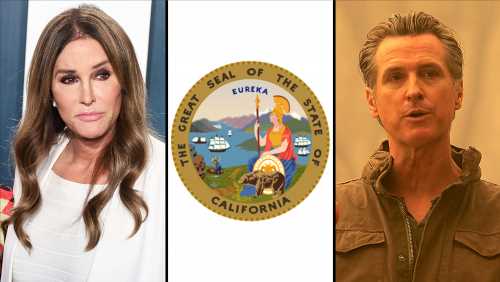 Caitlyn Jenner is going for the Golden State’s gold medal in a possible bid to take on Gavin Newsom to be California’s next Governor.

The 1976 Olympian and Keeping Up with the Kardashians star is in serious conversations about putting her name on the ballot to face off against the besieged incumbent in a recall election this fall, Deadline has confirmed However, what the ultimate result of that intention both tactically and strategically will be is TBD, we hear.

As first reported by Axios earlier today, Jenner has been sitting down with GOP operatives of late about attempting a repeat of Arnold Schwarzenegger’s toppling of Gray Davis back in the 2003 recall – the last time such a political earthquake hit the home of the San Andreas Fault.
As tantalizing a prospect as such a high-profile candidate may be for some Republicans looking to secure a ballot box coup in California, the globally famous transgender Jenner is clearly a long shot to defeat the seasoned and well financed Newsom in what is already a crowded GOP field.

Though certain to be subjected to a rare recall race in November for his early mishandling of the coronavirus pandemic, the first term Governor has been barnstorming vaccination sites around the state in the past few weeks in what appears to be a successful shift upwards in his poll numbers. Correspondingly a visit from popular pal and fellow Californian Vice President Kamala Harris yesterday and the announcement today that the state could be fully reopened by June 15 has strapped booster rockets to Newsom’s hopes of keeping his job.

Yet, with a presence on the current final season of the Kardashians, clan patriarch and the Bicentennial gold medal decathlete formerly known as Bruce Jenner looks to be playing the small screen long game as she teases her toes in electoral waters.

“Caitlyn Jenner is never going to be Governor of California, but she may get herself a new show on a streamer out of all this,” an industry insider close to the situation told Deadline today. With the exception of a stint on Fox’s The Masked Singer this spring, the CAA-repped Jenner hasn’t had a steady Stateside TV gig since 2015’s Kardashians’ spinoff I Am Cait on E!

As Keeping Up with the Kardashians ends its 20-season run on E!, Kris Jenner, criminal justice activist Kim, Kourtney and Khloe Kardashian and Kendall and Kylie Jenner last summer all signed with Hulu to debut a new series on the Disney-owned streamer later this year. It is unclear if Caitlyn Jenner will be a part of the Hulu series.

We do know that Jenner has spoken before about possibly seeking elected office, but never actually hit the campaign trail.

Improving her chances in California if she does decide to run for Governor, Jenner finally ended her dalliance with Donald Trump in 2018. One of the most well-known members of the transgender community, Jenner blasted the former Celebrity Apprentice host’s administration’s demonizing and attacking of the transgender community specifically and the LGBTQ community overall in remarks at Oxford University and in a Washington Post op-ed.

For all that, Jenner’s potential team themselves may become an issue in the campaign and a gift to Democrat Newsom.

The fundraiser noted in the Axios story, Caroline Wren, played a role in the organizing of the demonstration at the Ellipse on January 6, when then-President Trump claimed that the election had been stolen from him, according to a report in ProPublica. As was horribly played out on the streets of DC, the halls of the Capital and our TVs that day, that rally became the launch platform for the fatally violent assault on Congress by MAGA morons in a desire to prevent Joe Biden’s electoral college win the general election being formally certified.

Almost since the recall effort began picking up steam, Newsom has claimed that the disgruntle move is much more a stalking horse for the disruptive ambitions of the far right than it is a referendum on his tackling of Covid-19.

Reps for Jenner had no comment when contact by Deadline about her entering the race to replace Newsom.

Ted Johnson contributed to this report