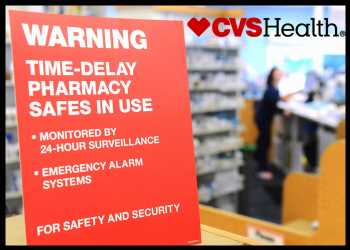 The new technology electronically delays the time it takes for pharmacy employees to open the safe.

The rollout of time delay safes is in support of Illinois Attorney General Kwame Raoul’s new Organized Retail Crime or ORC Task Force, which was established earlier this year.

Raoul said, “Opioid addiction has destroyed lives throughout Illinois, and tools that prevent addictive medications from being stolen from pharmacies support our work to combat the opioid epidemic and organized retail crime.”

According to the company, such partnership has helped to investigate and close a dozen ORC cases in Illinois this year alone, recovering millions of dollars in stolen product and identifying the sources of more than $45 million in losses to retailers statewide.

CVS Health, which first implemented time delay safe technology in 2015 in Pharmacy locations across Indianapolis, recorded a 70 percent decline in pharmacy robberies in those stores. Since then, the company has introduced time delay safes across 20 states, including Illinois, and the District of Columbia, resulting in a 50 percent decline in robberies at CVS pharmacies in those local communities.

All CVS Pharmacy locations in Illinois display visible signage warning that time delay safes are in use to prevent on-demand access to controlled substance narcotics.