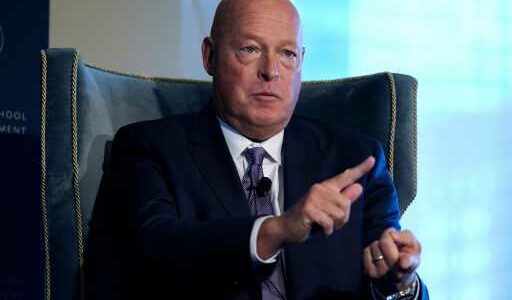 Bob Chapek, who is nearing the two-year mark since he took the baton as CEO for the Walt Disney Co., has articulated three key strategic priorities for the company in a memo to employees.

Referring to them as “pillars,” Chapek identifies the three areas as storytelling, innovation and a “relentless focus on our audience.”

The exec’s status as Disney’s sole leader was reaffirmed by 2021 officially coming to an end. Predecessor Bob Iger, who had stayed on as executive chairman and a creative consultant, officially ended his tenure on December 31. Several other long-tenured execs have also departed the company. On Wall Street’s checklist for Chapek, the No. 1 item is hitting subscriber projections for Disney+. Those numbers have sagged a bit of late, prompting concerns about its prospects after a white-hot launch in 2019. In November, Disney said it added just 2 million subscribers to its flagship service. It has pledged to reach 230 million to 260 million (from its current level of 118 million) by the end of fiscal 2024.

When Iger stunned the industry and business world by ceding the CEO role to Chapek in February 2020, Covid had just started its disruptive march across the globe. The new boss, who climbed the corporate ladder by running divisions like home entertainment and theme parks, was immediately put to a grueling test, managing through an historic period of uncertainty. All of the company’s core sources of revenue — parks and resorts, movie theaters and live sports, dried up instantly. Chapek won praise for navigating that intense early stretch of the pandemic, and the company’s stock closed that year on a high note, riding a wave of announcements of film and TV titles bound for Disney+.

Last year, however, the weather changed a bit. Reports surfaced (and were roundly denied) of a wary relationship between “Bob C.” and “Bob I.” and an acrimonious legal fight broke out (and was quickly settled) with Black Widow star Scarlett Johansson. Industry vets, while giving Chapek credit for his accomplishments, took note of the rare public battle with an A-list star, maintaining that such contretemps had not generally been Iger’s style. They also raised eyebrows at Chapek’s dramatic centralization of the company’s distribution structure in a new unit run by his former protégé, Kareem Daniel.

Chapek’s contract runs through February 28, 2023. The company plans to report its next quarterly earnings in early February. Along with the changes in the C-suite, Disney’s board of directors has also seen turnover in recent years. Susan Arnold, by far the most experienced director, was elevated to chairman late last year as Iger approached his departure.

As we begin the New Year, I want to share our mission and the strategic pillars that will be key to our success—but first, I want to start 2022 on a note of gratitude for all of you, your talent, dedication, and optimism during the most disruptive time in our company’s history.

Thanks to you, we are weathering the pandemic and emerging stronger than ever. Over the last two years, we continued to tell the world’s best stories, reorganized, and accelerated our transformation to better serve audiences and guests. We looked inward during a time of social disruption, saw how much was left to do, and made significant change. And of course, we underwent a leadership change—and I am enormously grateful for the tremendous foundation Bob Iger left us.

You achieved those things during a once-in-a-century pandemic, and I want to acknowledge those whose roles require them to be in the office or one of our parks, as well as those working from home while managing at-home learning and gaps in childcare. I also appreciate your patience as we begin reopening our offices. Our long-term goal is to provide greater flexibility, and your leaders will be in touch as plans evolve.

It’s ironic that this disruption is happening as we prepare to celebrate our company’s 100th anniversary. For nearly a century, we have defined and redefined entertainment, created countless lifelong memories, and delighted fans and families around the world. It’s a legacy that is simply unrivalled—and a welcome responsibility for us to build upon.

And so I believe our mission for this year is clear: set the stage for our second century, and ensure Disney’s next 100 years are as successful as our first. To do that, we will focus on three pillars.

First, storytelling excellence. What makes Disney so unique is that the stories we tell mean something to people. They inspire, give hope, bring us together, illuminate the world around us, and create memories. That is Disney magic, and we must continue to set the creative bar higher and higher. To that end—and in addition to all my other creative meetings—I am establishing a new standing monthly meeting with our senior creative leaders to discuss the opportunities we face as a storytelling enterprise. This will encourage collaboration, sharing of best practices, and stimulate cross-studio ideation.

Second, innovation. Since Steamboat Willie, we have been the world’s foremost innovative storytellers. That must continue as technology evolves, giving our creative teams new canvases like the metaverse on which to paint. We should be especially innovative as we seek to bring stories to life in new ways—particularly if they enhance what many call our “franchise ecosystem,” which is one of the things that sets us apart.

And third, relentless focus on our audience. We are a big company with many constituents and stakeholders, all of whom have a place in our decision-making. But at the end of the day, our most important guide—our North Star—is the consumer. Right now, their behavior tells us and our industry that the way they want to experience entertainment is changing—and changing fast thanks to technology and the pandemic. We must evolve with our audience, not work against them. And so we will put them at the center of every decision we make.

When you look at the entertainment landscape, I believe Disney stands alone. We have the world’s most creative storytelling engine along with the world’s most beloved brands and franchises—which we can bring to life in ways no one else can. We have a portfolio of distribution platforms across the world—including powerful streaming services—with the ability to reach audiences anywhere, anytime. We have the #1 news organization and the most trusted brand in sports. We bring people together and make magical memories that last a lifetime at our parks and on our cruise ships. We have a unique ability to impact culture and connect with people on deeply personal levels. And we have you—the best team in the business.

I couldn’t think of a better combination, and I could not be more optimistic about our future. I look forward to setting the stage for our next century with all of you, and to making the unique brand of magic that only Disney can.