The claim: Kamala Harris refused to salute members of the military while boarding Air Force Two

Shortly after a video emerged of Vice President Kamala Harris not saluting troops while boarding Air Force Two on March 19 in Georgia, some users took to social media to claim that she had disrespected the military and violated protocol.

The viral video being shared on social media shows the vice president at Dobbins Air Reserve Base near Atlanta heading up the stairs on Air Force Two. Harris is seen walking by two military escorts who are standing at the bottom of the stairs saluting, without her returning the gesture.

One user shared the video to Facebook on March 23 with the claim, “DISGRACEFUL: Vice President Kamala Harris refuses to salute the honor guard at the steps of the aircraft. It is a clear demonstration of her dislike for those in uniform, both law-enforcement and military.”

The same video and text was first shared on Twitter by former New York City police commissioner Bernard Kerik on March 22 in a tweet with over 9,500 likes and 4,900 retweets.

Kerik told USA TODAY via email that he stands by his statement and that “a military salute is a privileged gesture of respect, which is exactly why they were saluting her in the first place, even though she is not in their military chain of command.”

“By ‘returning’ their salute, she not only acknowledges their presence, but their self-sacrifice, and the sacrifice of every service member that wears that uniform. This isn’t about a policy, protocol and/or a law … this is about common courtesy, respect, honor and leadership,” he said.

In a similar version of the claim, one Facebook user posted a March 24 article from the DailyWire headlined, “Kamala Harris Breaks Precedent, Skips Saluting Military Before Boarding Air Force Two.”

“Too much of a big shot to follow protocol,” the Facebook user wrote in a post along with the DailyWire article, which notes that Harris as vice president is not required to salute.

Fact check: President Joe Biden, Democrats made remarks from the Rose Garden, not a movie set

Harris is not required to return salute

The video being shared by social media users is authentic and was originally posted to Twitter on March 19 by Peter Velz, Harris’ director of press operations.

While the video shows Harris not saluting military officers when boarding the plane, there is no protocol in place that requires the vice president to return salutes, as she is not in the military chain of command.

“There is no overarching instruction or regulation that requires the President or Vice President to return hand salutes from members of the Armed Forces,” Pentagon Press Secretary John Kirby said in a statement to USA TODAY. “Vice President Harris has made very clear her respect and admiration for the men and women of the military, as well as their families.

“Our troops demonstrate their respect for the nation’s senior leaders in many ways; rending a hand salute is one of them,” Kirby added.

According to Army Regulation 600-25 section 2-1f on Salutes, Honors, and Courtesy, “Civilian personnel, to include civilian guards, are not required to render the hand salute to military personnel or other civilian personnel.”

Harris press secretary Sabrina Singh told The Associated Press in a statement that claims that the vice president lacks respect for the military “could not be further from the truth.”

USA TODAY previously reported that Harris has been a proponent of decreased military spending and increased aid to veterans and their families.

Fact check:Viral photo of youth migrant detention center without masks is from 2014

Eric Fleury, an assistant professor of government and international relations at Connecticut College, told USA TODAY that “Harris did not violate protocol by not returning a salute” and “a salute is only required for military personnel who are literally in uniform at the moment.”

“There is not even a requirement that military personnel salute the vice president, who has no active role in the chain of command,” Fleury said in an email. “The only civilian requiring a salute is the President, which he or she is not obliged to return.”

Michael Desch, a professor of political science and the director of the Notre Dame International Security Center, told USA TODAY that until President Ronald Reagan in the 1980s, “it was not common for the president, or other Cabinet officials, but especially the president, to return hand salutes.”

Desch noted that Reagan’s successors continued to follow the practice and “all presidents seem to feel they need to do it” even though it is not required. He said based on protocol, Harris had “the appropriate response of a civilian official to a military salute.”

On Oct. 12, 1986, Reagan delivered remarks to U.S. service members and their families in Keflavik, Iceland, and explained why he decided to start returning salutes to military troops.

“One night over at the Commandant’s quarters, Marine Commandant’s quarters in Washington, and I was getting a couple of highballs, and I didn’t – [laughter] – know what to do with them. So, I said to the Commandant – I said, ‘Look, I know all the rules about saluting in civilian clothes and all, but if I am the Commander in Chief, there ought to be a regulation that would permit me to return a salute,'” he said, according to a transcript from the Ronald Reagan Presidential Library and Museum.

Fleury said there is debate surrounding Reagan’s motives for returning a salute, “ranging from a genuine willingness to show respect to an effort to bolster his image as a strong leader,” but “whatever one’s assessment of his reasons, the issue has become a visual litmus test for both the president’s respect for the armed services and their leadership capabilities.”

“Determining if failure to return a salute is disrespectful or not usually reflects assumptions grounded in politics rather than protocol,” he added.

In response to a Fox News tweet of an article that said Harris “repeatedly fails to salute military,” Tom Nichols, a professor at the U.S. Naval War College, pointed out that not only is returning a salute not a requirement but it would also be “incorrect” for her to salute anyone.

Some previous vice presidents have saluted the military but that still does not make it a required practice.

Lead Stories points to a December 2020 livestream from 11Alive in which former Vice President Mike Pence is seen saluting members of the military, as well as a video of Biden doing the same in 2013 while he was serving as vice president under Barack Obama.

Fleury also notes that in Obama’s book “A Promised Land,” the former president describes practice sessions with his staff to perfect a proper salute, “knowing the public fallout that could (and sometimes did) await him for an insufficiently crisp salute.”

In 2014, Obama faced criticism for saluting Marines while holding a coffee cup in his hand, according to The Washington Post. Similarly, former President George W. Bush was criticized in 2001 for saluting while carrying his dog, ABC 7 Chicago reported. 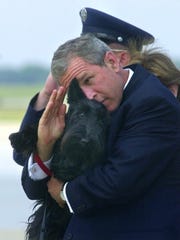 President Bush does his best to salute while holding his dog Barney as they get off of Air Force One at Andrews Air Force Base, Md. (Photo: Associated Press)

Fact check:Marines did not salute Joe Biden before he was sworn in, per protocol

Claims that Vice President Kamala Harris “refused” or “failed” to salute military personnel when boarding Air Force Two are MISSING CONTEXT, based on our research. It is true that Harris did not salute members of the military, however, it is misleading to claim that she refused to do so or that it demonstrated her dislike for those in uniform. A Pentagon spokesperson and experts have confirmed that she is not required to salute by protocol because she is a civilian and is not in the military chain of command. Saluting military troops was an informal practice started by President Ronald Reagan, and successors have followed the practice, which is not required. The vice president’s press secretary has denied allegations that Harris lacks respect for the military.

Thank you for supporting our journalism. You can subscribe to our print edition, ad-free app or electronic newspaper replica here.

Our fact check work is supported in part by a grant from Facebook.