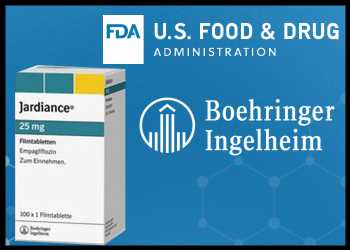 The U.S. Food and Drug Administration or FDA approved Boehringer Ingelheim’s diabetes drug Jardiance (empagliflozin), co developed by Eli Lilly and Co., to mitigate the risk of cardiovascular death and hospitalization for heart failure in adults.

Heart failure is a syndrome in which the heart is not meeting the needs of the body. The issue affects more than 650,000 people in the U.S. each year, and mortality remains high. Heart failure becomes more common with age and is the leading cause of hospitalization in people over 65 years old.

The main efficacy measurement was the time to death from cardiovascular causes or need to be hospitalized for heart failure.

Jardiance was originally approved by the FDA in 2014 as a supplement to diet and exercise to improve glucose control in adults with type 2 diabetes.

The approval coincides with February’s annual observance of American Heart Month, which is a reminder for individuals to focus on cardiovascular health.