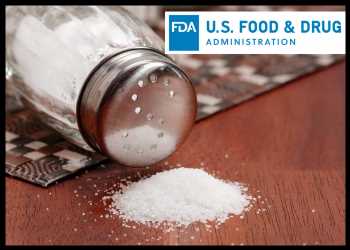 The U.S. Food and Drug Administration has issued final guidance to food industry for voluntarily reducing sodium in processed, packaged and prepared foods.

FDA said the sweeping new guidance is issued in an attempt to reduce the consumption of sodium in Americans’ diets, which can help prevent diseases like hypertension and cardiovascular disease.

Acting FDA Commissioner Dr. Janet Woodcock told reporters at a press conference Wednesday that the new sodium reduction guidance would become one of the most significant public health nutrition interventions in a generation.

Sodium is widely present in the American diet most commonly, but not exclusively, as a result of eating or drinking foods to which sodium chloride, commonly referred to as salt, has been added, according to the FDA.

Research shows that people consume 50 percent more sodium than recommended in their food intake, which is linked to high blood pressure and increased risk of heart disease and stroke. This includes the youngest and most vulnerable populations, with more than 95 percent of children aged 2 to 13 years old exceeding recommended limits of sodium for their age groups.

Although many consumers may want to reduce their sodium intake, about 70 percent of the sodium they eat comes from packaged, processed and restaurant foods, making it challenging to limit sodium. Changes across the overall food supply will make it easier to access lower-sodium options and reduce intake even in the absence of behavior change, according to FDA.

The aim is to decrease average sodium intake from approximately 3,400 milligrams to 3,000 milligrams per day, which means a 12 percent reduction over the next two and a half years.

“Although the average intake would still be above the Dietary Guidelines for Americans’ recommended limit of 2,300 mg per day for those 14 and older, we know that even these modest reductions made slowly over the next few years will substantially decrease diet-related diseases,” said Susan T. Mayne, Director – Center for Food Safety and Applied Nutrition.

“In the future, we plan to issue revised, subsequent targets to further lower the sodium content incrementally and continue to help reduce sodium intake,” said Woodcock.

FDA officials said that voluntary and gradual approaches like this have proven successful in other countries, such as Canada and the U.K. A number of U.S. companies in the food industry have already made changes to sodium content in their products, which is encouraging, they noted.