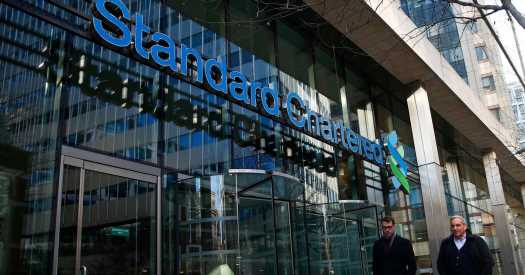 Anne Smedinghoff, a Foreign Service officer at the U.S. Embassy in Kabul, was escorting Afghan journalists on an outing when a roadside bomb killed her in 2013. The bomb’s design relied on fertilizer made in Pakistan, at two factories that regularly supplied a nearby Taliban bomb-making operation — a fact that U.S. authorities had publicized.

The factories, Fatima Fertilizer and Pakarab Fertilizers, were not fly-by-night organizations. Both did business in U.S. dollars through accounts at the London-based bank Standard Chartered.

Now Ms. Smedinghoff’s family and a group of nearly 500 others — including soldiers and civilians who were severely wounded in Afghanistan and their families, along with the families of victims who were killed — are accusing some of the world’s largest banks of helping terrorists carry out their attacks. Among the defendants are Deutsche Bank, Standard Chartered and Danske Bank.

Plaintiffs in the lawsuit, filed on Thursday in federal court in Brooklyn, include 115 Gold Star families — relatives of American military service members killed in the war — as well as relatives of noncombatants like Ms. Smedinghoff, who was killed while taking the journalists to watch U.S. officials donate books to a school. They are seeking billions of dollars in damages, arguing that the banks provided accounts, transfers and other routine services to companies and individuals who they knew were helping terrorist networks responsible for hundreds of deadly attacks.

The lawsuit will be a powerful test of the reach of a 2016 antiterrorism law, the Justice Against Sponsors of Terrorism Act. It allows terrorism victims and their families to seek relief from people, entities and countries that have provided “material support, directly or indirectly, to foreign organizations or persons that engage in terrorist activities against the United States.”

Victims and their families have sued banks under the law before, with mixed results. The suit filed on Thursday takes a broad approach: It cites relationships that banks had with people and companies that dealt with the attackers, rather than services provided directly to known terrorists.

This single degree of remove could allow the banks to argue that their activities were not directly related to the bombings that the lawsuit describes because their customers were legitimate businesses, even if those customers had dealings with criminals. If successful, the suit could open the door to a flood of similar cases.

A representative of Danske Bank had no immediate comment. Representatives of Deutsche Bank and Standard Chartered declined to comment.

The 2016 law was passed to give terrorism victims more leeway to sue governments and other entities that they believe have aided terrorism. Before it passed, such suits could go forward only against entities that the U.S. government had designated as state sponsors of terror. The law was written to help families of victims of the Sept. 11, 2001, attacks pursue legal claims against Saudi Arabia for its role in aiding their architect, Osama bin Laden.

Although federal law makes it a criminal matter for banks to knowingly participate in illegal activities, including by transferring money or providing other banking services, prosecutors have been reluctant to bring such cases, especially where they are linked to terrorism. If successful, such cases would carry such steep penalties that they could force banks out of business. Instead, prosecutors have relied on victims and their families to pursue claims in civil courts.

The lawsuit draws heavily on publicly reported warnings that U.S. authorities gave about companies and people with ties to terrorist networks. In 2013, for example, a senior Defense Department official, Lt. Gen. Michael Barbero, met with Standard Chartered executives to describe the U.S. government’s efforts to tamp down on the flow of fertilizer to bomb makers, specifically citing the bank’s fertilizer production clients, The Mail on Sunday reported in 2019.

The plaintiffs say the banks’ treatment of some of their clients indicated that they understood how their services were connected to illegal activities. The suit alleges that Deutsche Bank, for instance, charged higher-than-normal rates to move money around the world for some of its clients, including a Pakistani man whom the U.S. government had flagged as a money launderer for terrorists. In 2016, the government said the man, Altaf Khanani, laundered money for drug traffickers and other criminal organizations.

Deutsche Bank used a complex series of stock trades in the United States and Russia, called mirror trades, that allowed him to move money around the world on behalf of Al Qaeda and the Taliban, Buzzfeed News reported last year.

Deutsche Bank’s use of mirror trades have attracted government scrutiny before: U.S. state authorities and British regulators have fined the bank, and the Justice Department is conducting a criminal investigation.