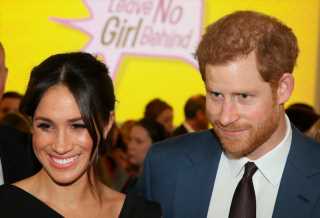 ANTI-SOCIAL: First, there was cancel culture: Now there’s self-cancel culture. The Duke and Duchess of Sussex have become the latest high-profile names to quit social media altogether after Bottega Veneta mysteriously disappeared from Instagram last week, and declined to comment on the move.

The Sunday Times of London put the story, and a picture of Meghan and Harry, on its front page, and the news was widely reported in the British media.

The Sunday Times quoted a source close to the couple as saying the young royals have “no plans” to use social media for their new Archewell Foundation and, going forward, were “very unlikely” to press any social platforms into action because of the online trolling and bullying they say they’ve witnessed.

WWD has contacted Harry and Meghan’s press team for comment.

The two have more than 10 million Instagram followers, slightly fewer than the Duke and Duchess of Cambridge’s 12.3 million, and considerably fewer than the couple’s pal and California neighbor Oprah Winfrey at 19.2 million.

Since they first got together, Harry and Meghan have been keen to control the narrative, breaking with various British royal traditions by not making public where the Duchess of Sussex gave birth to their son Archie Harrison Mountbatten-Windsor, and refusing to disclose the name of the baby’s godparents at the christening.

They are also suing a number of media outlets over libel, data and copyright violations. Their relationship with the British tabloid press was one of the many reasons the couple gave up their royal duties and moved to America. They have said many times they only want to engage certain publications of their choosing.

Meghan and Harry have lodged separate lawsuits against Associated Newspapers, publisher of The Mail on Sunday.

Meghan is taking legal action with regard to the paper’s publication of a letter she wrote to her father, Thomas Markle, while Harry is taking the paper to court for allegedly libelous comments regarding his relationship with the Royal Marines.

Earlier this month, the two set up a new website for their Archewell Foundation, a non-profit that aims to “uplift and unite communities — local and global, online and offline — one act of compassion at a time,” which they will presumably use as a communications platform going forward.

The royal couple has also done deals with Netflix and Spotify to generate income, and make sure their voices continue to be heard.

Their move comes just five days after Bottega Veneta disappeared from Instagram, with no explanation.

The luxury brand’s site had 2.5 million followers, and it remains unclear why Bottega pulled it down, or whether it will return. Only the Bottega fan sites over which the brand has no control, remain.

WWD speculated that Bottega could be making a statement about Instagram, or the role of luxury brands on social media, or possibly asking followers to stop spending so much of their time online.