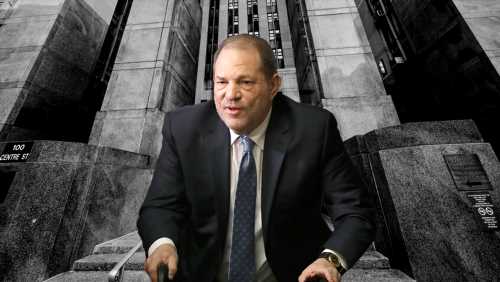 Over a year after the once powerful producer was sentenced to 23 years in prison, Harvey Weinstein today filed his long pledged appeal of the multiple sex crimes that a New York jury found him guilty of back in early 2020.

“Mr. Weinstein was tried in a venue, the atmosphere of which was permeated with negative publicity about him and his alleged relationships with women,” says the thickset 190-page appellate brief filed today in the Empire State by The King’s Speech executive producer’s defense team.

“Mr. Weinstein had a right to a fair trial by an impartial jury,” the filing adds, citing a “carnival-like” atmosphere at the last trial. “The trial court should have exercised the utmost vigilance in protecting this most important right of the defendant. Instead, the trial court was cavalier in its obligation to safeguard this right and the consequences for Mr. Weinstein were disastrous.”

Taking a dog’s breakfast approach to springing the ailing Weinstein from the maximum security Wende Correctional Facility near Buffalo, NY, the often self-pitying and hulking appeal claims “Mr. Weinstein was tried not only for alleged criminal acts charged in the indictment, but also for his alleged propensity to behave in ways that evinced licentiousness in his relationships with women.”

In that context, today’s filing aims to have the one-time mogul’s convictions “reversed, the third-degree rape charge dismissed, and a new trial ordered on the single count of first-degree criminal sexual act based on the July 10, 2006 incident” with “complainant Miriam Haley.” That self-termed “incident” with Haley, who is represented by Gloria Allred, is covered in depth in the appeal, as is almost everything related to this case.

Weinstein was convicted in February 2020 on one count of a criminal sexual act in the first degree (based on Haley’s charge of Weinstein forcibly performing oral sex on her in 2006) and one count of third-degree rape in the case of Jessica Mann, who accused Weinstein of raping her in a Manhattan hotel room in 2013. Allegedly suffering from a litany of health issues that have seen him in and out of Bellevue Hospital, plus a bout with Covid-19 behind bars, Weinstein was sentenced to more than two decades in an Empire State prison on March 11 last year by New York Supreme Court Judge James Burke.

Now, resurrecting a greatest hit list of previously failed motions to halt or pause the six-week trial during its actual run, Weinstein’s Aidala, Bertuna & Kamis, P.C legal team have wagered their client’s appeal success heavily on a potentially prejudicial juror with “a pecuniary motive to convict the defendant.”

All wrapped up in a packaging of grievance, Weinstein’s jam-packed constitutional violations-based appeal also features appearances by an indiscreet NYPD detective, the past LA County D.A., “the trial court’s refusal to permit expert testimony by the defense,” the media, “prior bad acts” testimony and an overall undermining of the decisions of Judge Burke during the 2020 trial itself.

“With a year behind us and emotions subsided, the transcript of the case confirms what we always believed: that Mr. Weinstein did not receive a fair trial,” defense attorney Arthur Aidala told Deadline. “We will argue that the trial judge disregarded well accepted and fundamental principles of New York law and violated Mr. Weinstein’s constitutional rights.” The Aidala, Bertuna & Kamins PC partner went on to say: “We have the utmost confidence that the Appellate Division will correct these mistakes and send this case back before a different judge.”

Filled with confidence or not, Weinstein’s much anticipated appeal comes in the shadows of a newly filed rape suit stemming from an alleged November 2012 assault in Beverly Hills and an April 9 hearing on extradition to LA to face felony counts of forcible rape, forcible oral copulation, sexual penetration by use of force, sexual battery by restraint and sexual battery. If convicted of the West Coast charges, the 69-year old disgraced producer could be looking at a 140-year sentence or de facto triple life in prison in total.

But, that is another act yet to play itself out.

Right now, based on past rulings by Judge Burke and the NY courts, Monday’s appeal has all the auspiciousness of a Hail Mary move. However, once you forge through all the numbing regurgitation, calculated outrage, and autobiographical material, the apparent subterfuge of Juror No. 11 could prove a sticky wicket for outgoing Manhattan D.A. Cyrus Vance Jr and his office.

“Although the defense raised legitimate questions about whether Juror No. 11 was fit to serve, the trial court failed to discharge its constitutional obligation to conduct a full inquiry to ensure that the juror was capable of rendering a fair and impartial verdict,” today’s appeal states in language heard before in past motions.

“Clearly, the fact that the prospective juror had written a book that involves sexual relationships between women and ‘predatory older men’ – the very accusation against Mr. Weinstein – is something that should have been disclosed, even absent a direct question,” the document says of “Juror No. 11’s lack of candor in her responses to her juror questionnaire.” Essentially, the author of the July 2020 published Age of Consent ticked off ‘No’ when asked ‘Is there anything else that you believe the judge and the parties should know about your qualifications to serve as a fair and impartial juror in this case?’

“For reasons that seemed obvious even then, however, she wanted to sit as a juror on this specific case and avoid disclosing anything that would prevent her from doing so,” the appeal proclaims.

Clearly, part of the strategy is to throw enough at the wall that something will stick, as well as stink. Whether that proves to be enough for Harvey Weinstein to embark on a legal comeback remains to be seen.

D.A. Vance’s office had no statement on the filing of Weinstein’s appeal when contacted by Deadline today. We will update, if and when they do.