Home » Business » Here’s the biggest news you missed this weekend

Here’s the biggest news you missed this weekend

Tropical Depression Claudette left at least 12 dead in Alabama as the storm continued to batter and flood parts of the Southeast as it moved toward the Atlantic Coast. Ten people, including nine children, died in a multi-vehicle collision on Saturday that was likely caused by storm-related hydroplaning, Butler County Coroner Wayne Garlock said. Separately, a 24-year-old father and his 3-year-old son died in their home when a falling tree struck the residence in Tuscaloosa County, Alabama, police said.

Claudette, which had tropical storm status at one point on Saturday, struck parts of Alabama, Mississippi, Georgia and the Florida Panhandle with high winds, tearing roofs off houses and flipping an 18-wheeler and a mobile home. Claudette is forecast to re-strengthen into a tropical storm Sunday night over eastern North Carolina, the National Hurricane Center said. 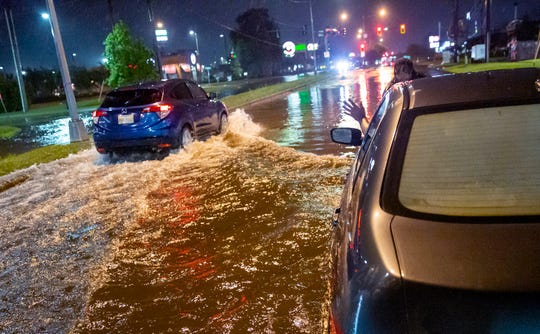 Lamont Pepp, right, waves to a passing motorist to slow down after Pepp's car stalled in high water in Slidell, Louisiana, late Friday, June 18, 2021, as a tropical disturbance neared the Louisiana shore. (Photo: Scott Threlkeld, The Advocate via AP)

A year after protesters toppled statues of colonizers and slaveholders across the U.S., several cities unveiled new monuments this week to mark Juneteenth in its first year as a federal holiday and honor the lives of George Floyd, abolitionist Harriet Tubman and many others. Americans celebrated the day at parties, parades and family gatherings Saturday, two days after President Joe Biden signed a bill to make Juneteenth, a day commemorating the end of slavery in Confederate states, a federal holiday. In Brooklyn, Terrence Floyd unveiled a statue of his brother, George, and led dozens on a Juneteenth rally. In Galveston, Texas, the birthplace of the holiday, celebrations included the dedication of a 5,000-square-foot mural titled “Absolute Equality.” 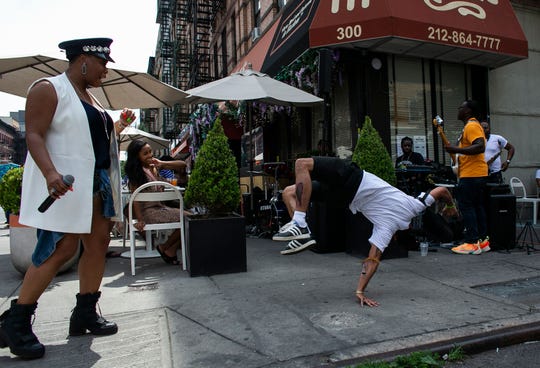 Performers dance, sing and play music outside a restaurant during the 28th annual Juneteenth celebration in the Harlem neighborhood of New York, on June 19, 2021. (Photo: Kena Betancur, AFP via Getty Images)

Ebrahim Raisi, a hardline legal official sanctioned by the U.S. government, won Iran’s presidential election after his main rivals conceded defeat Saturday, state media reported. Incumbent Hassan Rouhani, a moderate, is stepping down because he has reached his term limit. The U.S. and Iran, aided by European nations and Russia, are currently locked in talks over if, and on what terms, to resume a 2015 nuclear accord exited by former President Donald Trump. There’s a chance Raisi’s victory could complicate those discussions, but a change in presidency might not mean a complete overhaul in foreign policy for the country.

The highly anticipated matchup between two title favorites lived up to expectations. The Milwaukee Bucks, led by two-time MVP Giannis Antetokounmpo’s 40 points, outlasted Kevin Durant and the Brooklyn Nets in a Game 7 thriller that went to overtime on Saturday. Durant did his part and then some, pouring in 48 points – an NBA record for a Game 7 – while playing every single minute of the game for the Nets, who were once again missing star point guard Kyrie Irving. Milwaukee, now going to its second Eastern Conference Finals in three seasons, will take on the winner of a Sunday Game 7 between the Philadelphia 76ers and the Atlanta Hawks.

The Western Conference Finals started Sunday, but two of the biggest names weren’t on the floor. Los Angeles Clippers star Kawhi Leonard was ruled out with a knee injury, while Phoenix Suns point guard Chris Paul was withheld from the game while he remained in the league’s COVID-19 health and safety protocol.

One person was killed and another was seriously injured after a pickup slammed into a crowd at the start of a Pride parade in South Florida Saturday night, officials said. The driver, a member of a men’s chorus group, unintentionally slammed into fellow members of the group, the group’s director said Sunday, clarifying initial speculation that it was a hate crime directed at the gay community. Wilton Manors Vice Mayor Paul Rolli and Fort Lauderdale Mayor Dean Trantalis said the early investigation shows it was an accident. The driver was taken into custody, but it was unclear whether he had been charged.

This is a compilation of stories from across the USA TODAY Network. Contributing: Associated Press.