A historic $27 million settlement in a lawsuit filed over George Floyd’s death, announced as a jury is being chosen for the criminal trial of the officer accused of killing him, complicates a high-profile prosecution and could become grounds for an appeal of a conviction, legal observers say.

Floyd’s death under the knee of then-police officer Derek Chauvin was captured on video and seen by millions. It sparked nationwide protests against racial injustice and police brutality. Friday, the city of Minneapolis settled a civil rights lawsuit against it and the four officers who restrained him.

The announcement of the settlement, which occurred when the criminal trial was on a lunchtime break, “was incredibly bad timing and extremely damaging to the defense and maybe the state,” said Mary Moriarty, former chief public defender of Hennepin County, Minnesota.

Among the possible effects: A potential juror could presume there’s no need to convict Chauvin because the Floyd family has already received a large settlement, she said.

A group of protesters march in the snow around the Hennepin County Government Center, Monday, March 15, 2021, in Minneapolis where the second week of jury selection continues in the trial for former Minneapolis police officer Derek Chauvin. Chauvin is charged with murder in the death of George Floyd during an arrest last may in Minneapolis. (Photo: Jim Mone, AP)

Chauvin is on trial on charges of second- and third-degree murder and second-degree manslaughter. Prosecutors have been careful to avoid potential causes for appeal, Moriarty said. “This certainly creates one. Not of their doing.”

Floyd died in May after being handcuffed and pinned to the ground under Chauvin’s knee for more than 9 minutes. Floyd repeatedly cried out, “I can’t breathe.”

Floyd’s family filed a federal civil rights lawsuit in July against the city, Chauvin and three other officers charged in his death. It alleged the officers, who have since been fired, violated Floyd’s rights when they restrained him and that the city allowed a culture of excessive force, racism and impunity to flourish on its police force.

When court convened Monday morning, Chauvin’s defense attorney, Eric Nelson, said the timing of the settlement was suspicious. It “has an incredible propensity to taint a jury pool,” he said.

He noted that the seven jurors selected by then could come across a headline about the settlement while scrolling through Facebook. Jurors are not allowed to view or read anything related to the case, but social media is allowed. 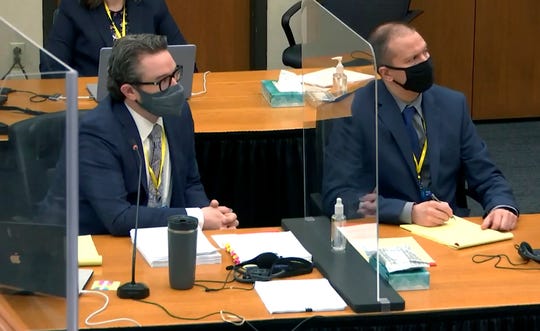 Nelson asked Hennepin County District Court Judge Peter Cahill to delay the trial, move it to a new location and sequester all jurors for the duration. As of now, they will be sequestered only during deliberations.

Steve Schleicher, a special assistant attorney general, said there was no reason to delay the trial.

Prosecutors wish they were “trying this case in a vacuum with no pretrial publicity,” he said. “It would make things less complicated, but that’s just not where we are.”

Cahill said both sides have legitimate concerns, and he called the timing unfortunate. “But I don’t suspect any evil intent in the timing,” which he said probably stems from the city’s desire to limit its liability if Chauvin is convicted.

Still, Cahill said, “I wish city officials would stop talking about this case so much.”

He said he would bring the seven jurors back for questioning about their exposure to the civil settlement, and he would consider the motion to delay the case.

Does settlement add to publicity of Floyd’s death?

Attorneys watching the case said it’s unlikely the case will be moved or delayed.

“There’s so much pretrial publicity already, I don’t think this settlement changes the ultimate mix of information out there,” said Ted Sampsell-Jones, a professor at Mitchell Hamline School of Law.

A man changes the number of a sign board at a makeshift memorial of George Floyd before the third day of jury selection begins in the trial of former Minneapolis Police officer Derek Chauvin who is accused of killing Floyd, in Minneapolis, Minnesota on March 10, 2021. (Photo: CHANDAN KHANNA, AFP via Getty Images)

Sarah Davis, executive director of the nonprofit Legal Rights Center in Minneapolis, said she followed Monday’s hearing on Twitter. The settlement’s timing was “incredibly damaging and prejudicial,” she said.

“If I was Derek Chauvin’s defense attorney, I would move for a mistrial,” she said.

But it may not have been possible to avoid such timing. The Minneapolis City Council approved the settlement Friday, and votes on legal settlements are required to be public, said Sarah McKenzie, a city spokeswoman.

As to whether the Floyd family could have delayed a settlement until after the criminal trial, Antonio M. Romanucci, one of the lawyers representing the family, said, “Justice does not wait.” 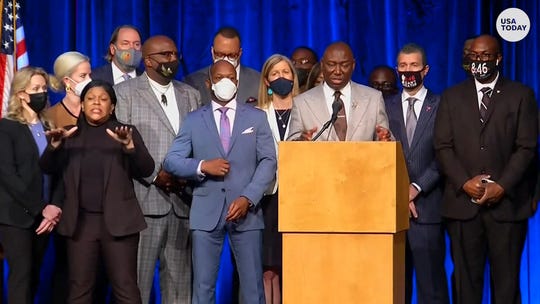 The family of George Floyd has reached a $27 million settlement with the city of Minneapolis in a civil lawsuit over his death in police custody. (Photo: USA TODAY)

Romanucci said there’s no way the settlement announcement has tainted the jury pool.

“This has been the most widespread video seen in civil rights history,” he said. “You’re going to tell me now that a one-hour press conference is going to change a juror’s mind after 10 months of Minneapolis citizens hearing about George Floyd every day? That’s hogwash.”

Virtually all potential jurors have told lawyers they had seen or heard something about the case. Lawyers on both sides have focused on whether potential jurors would be willing to set aside any opinions on Floyd’s death and hear the evidence with an open mind.

The woman, who deals with civil lawsuits as part of her job as a human resources professional, said she “almost gasped at the amount” when she accidentally heard about the settlement. She said she thought it meant city officials believed they would lose the case. The potential juror said she couldn’t be impartial juror, and she was dismissed by the judge.

She was the only one to mention the settlement Monday.

How do jurors avoid coming across news of the case?

Monday’s debate over jurors’ knowledge of outside developments may not be the last.

Though jurors have been told to avoid media coverage of the case, they have not been directed to avoid social media. They will be allowed to use their devices when court is in recess, which is typically the case in trials.

The pandemic has limited opportunities to gather with friends and family, and people are spending more time on devices. Given the nature of social media, the most controversial events tend to rise to the top of people’s news feeds.

According to a Pew Research Center study conducted last year amid the pandemic, about half of U.S. adults said they get news from social media “often” or “sometimes.”

“It’s hard to avoid a headline, and that’s the problem,” Moriarty said. “You can’t scroll through Facebook without seeing thing you don’t want to see necessarily.” 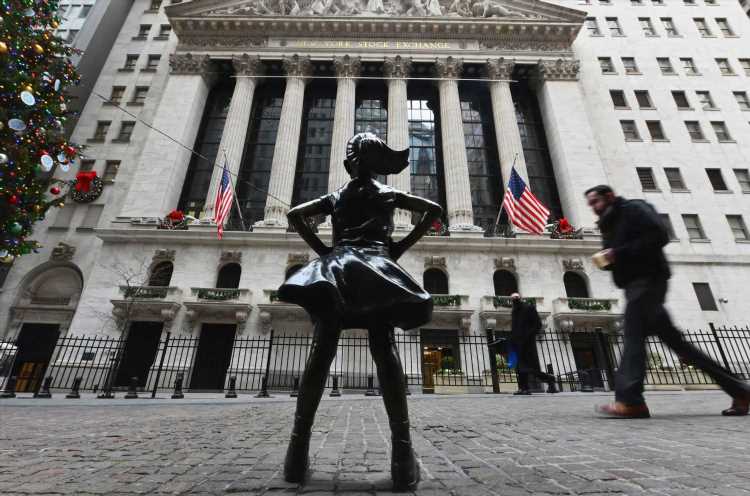