New York (CNN Business)Extradition hearings for Huawei CFO Meng Wanzhou have concluded more than two years after she was arrested in Vancouver, Canada.

But the case isn’t over yet. Meng now awaits the decision of Canadian Associate Chief Justice Heather Holmes as to whether she should be extradited to stand trial in the United States, where she and Huawei have been charged for alleged bank fraud and evasion of economic sanctions against Iran. The ruling is expected to take months.
The case has thrown a wrench in US, Canadian and Chinese relations. The United States wants Meng, who is also the daughter of the Chinese telecom giant’s founder and CEO Ren Zhengfei, to be extradited to New York and tried along with Huawei.

Meng was arrested in December 2018 at the Vancouver airport at the behest of the US government and has been living under house arrest in her multimillion-dollar homes in the city amid the proceedings.

The US case centers on whether Meng misled HSBC (HBCYF) about Huawei’s relationship with an Iranian subsidiary, Skycom, which the US alleges could have put the bank at risk of sanctions violations. Huawei and Meng’s team have denied these allegations, saying that HSBC executives knew of Huawei’s relationships with Skycom.

Holmes last year approved the crucial first step in the extradition proceedings — known as the test of “double criminality” — finding that, if proven, the allegations brought by the US government would also amount to a crime in Canada.
In this latest round of hearings, Meng’s team presented arguments related to alleged abuses of process that they claim should result in a stay of the extradition proceedings. Their arguments included allegations that the US case was politically motivated, that Meng was a pawn in former US President Donald Trump’s trade war with China, and that Meng’s rights were violated when she was arrested in the Vancouver airport.
Holmes set October 21 as the date for the next court appearance in the case, at which point she is expected to announce the date of her ruling. 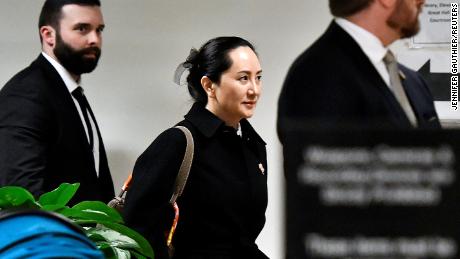 If the judge rules in Meng’s favor, the extradition proceedings will be over and Meng could be released; although the Crown, which is arguing on behalf of the extradition, could decide to appeal. If Holmes rules against Meng, the decision will move to Canada’s justice minister for final approval.
“From the start, Huawei has been confident in Ms. Meng’s innocence and has trusted the Canadian judicial system,” Huawei Canada said in a statement Wednesday. “Accordingly, Huawei has been supporting Ms. Meng’s pursuit of justice and freedom. We continue to do so today.”
Source: Read Full Article