Home » Business » 'I was wrong': US treasury secretary admits she was wrong about US inflation in 2021

'I was wrong': US treasury secretary admits she was wrong about US inflation in 2021

Washington (CNN)US Treasury Secretary Janet Yellen admitted Tuesday that she had failed to anticipate how long high inflation would continue to plague American consumers as the Biden administration works to contain a mounting political liability.

“I think I was wrong then about the path that inflation would take,” Yellen told CNN’s Wolf Blitzer on “The Situation Room” when asked about her comments from 2021 that inflation posed only a “small risk.”
The admission was the latest indication that the administration’s expectations of a normalizing economy were thrown into disarray by the continuing pandemic and the war in Europe.

“As I mentioned, there have been unanticipated and large shocks to the economy that have boosted energy and food prices and supply bottlenecks that have affected our economy badly that I didn’t — at the time — didn’t fully understand, but we recognize that now,” she said.

Yellen and other White House officials once framed inflation as a temporary side effect of the economy returning to normal following the pandemic, pointing to snags in supply chains and demand outstripping supply.

Yet months later, inflation is running at a near-four-decade high.
Recent economic indicators have raised optimism that inflation may have peaked at 40-year highs in March, although economists warn it could take considerable time before inflation returns to healthy levels. In response, the White House is launching a month long effort to signal a heavy focus on the economy.

The push began on Monday with an op-ed from President Joe Biden published in The Wall Street Journal and continued Tuesday with an Oval Office sit-down among Biden, Federal Reserve Chairman Jerome Powell and Yellen. 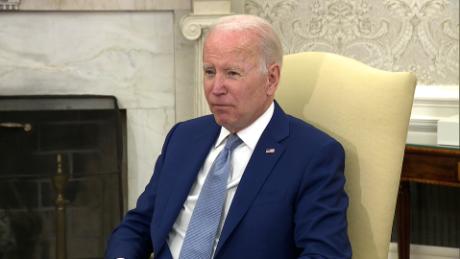 How the Biden WH predictions about inflation are biting back now

The Treasury secretary said that Biden had indicated in the meeting that he “shares the Fed’s priority in lowering inflation, and that he believes strongly in his support of the independence of the Fed to take the steps that are necessary.”
A Treasury spokesperson told CNN in a statement that Yellen’s comments were in the context of certain unforeseen events that ended up hitting the economy.
“The Secretary was pointing out that there have been shocks to the economy that have exacerbated inflationary pressures which couldn’t have been foreseen 18 months ago, including Russia’s decision to invade Ukraine, multiple successive variants of COVID, and lockdowns in China,” the spokesperson said. “As she also noted, there has been historic growth and record job creation and our goal is now to transition to steady and stable growth as inflation is brought down.”
The Powell-led Fed has been criticized as slow to address high inflation by ending emergency support for the economy and beginning interest rate hikes. However, the Fed has vowed to swiftly raise interest rates and earlier this month increased rates by half a percentage point for the first time since 2000. The US central bank has signaled further aggressive rate hikes in the months to come.

Beyond Yellen, a number of other economic aides have flooded cable news airwaves in the hopes of driving the message that Biden is dedicated to bringing down the prices of gasoline, food and housing, which have led to a slump in his approval ratings.
The President, Yellen said Tuesday, knows “what an important and huge burden inflation is placing on American households.”
Source: Read Full Article