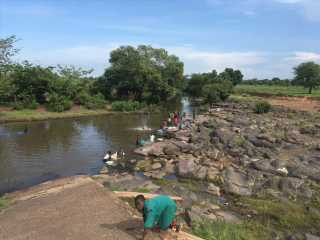 To recognize and honor World Rainforest Day, which was Tuesday, global payments company Klarna teamed with Scotch & Soda to support the launch of the brand’s partnership with Trees for All. Scotch & Soda and Klarna will be planting 10,000 trees.

The plantings will be done in the Carara National Park in Costa Rica as well as the Bongo District of Ghana in West Africa. “Trees for All is a global scope foundation carrying out reforestation projects in Central and South America, Africa and Asia as well as in the Netherlands for more than 20 years,” Klarna said in a statement, adding that “every first-time purchase made with Klarna on Scotch-soda.com, a tree will be planted on behalf of each customer, certified by Trees for All.”

The reforestation project was done to celebrate the partnership between Scotch & Soda and Klarna, the companies said. The brand began offering Klarna’s payment options last fall and is available on its website. The initiative also follows the launch of GiveOne.com, which is a Klarna program aimed at offering carbon footprint education to shoppers. Part of the program includes committing 1 percent of all Klarna funding rounds to projects that support the planet.

Regarding the Scotch & Soda program, Stéphane Jaspar, chief marketing officer, said the brand is “looking forward to helping restore local ecosystems on behalf of our customers starting [June 22]. It is a very easy way for the Scotch & Soda community to do good and contribute to reforestation efforts in well-defined areas that need it the most.”

Klarna’s David Sandström, CMO of the company, said that facilitating innovation and change “to make a positive impact on the world is a core element of Klarna’s culture and, as a global brand and business, we have a responsibility to tackle some of the most pressing sustainability challenges.”

He said through this campaign “with Scotch & Soda and Trees for All, we encourage and enable customers to take action with an individual step that collectively contributes to reducing and preventing deforestation around the world.”

Scotch & Soda and Klarna will contribute 5,000 trees to the Bongo District of Ghana, one of the country’s driest areas and home “to a significant water source that farmers and surrounding villages depend on for drinking water and irrigating the land – the reservoir of the Vea Dam, into which the Yarigatanga River flows,” Klarna said in a statement.

The other 5,000 trees are earmarked for restoration efforts in Costa Rica’s Carara National Park, which is “one of the most biodiverse nature reserves in Central America, but due to large-scale deforestation, many of its plants and animal species have become scarce.”