Home » Business » Mei Lee is a 13-year-old girl who loves karaoke, her best friends and the boy band 4*Town.

Mei Lee is a 13-year-old girl who loves karaoke, her best friends and the boy band 4*Town.

(CNN)In an early scene from the new Pixar film “Turning Red,” the character Mei hides out in the bathroom on a morning before school. Having spiraled from a particularly embarrassing encounter the night before, she’s woken up to find that she’s turned into a giant red panda.

Mei’s mother Ming assumes this reluctance to leave the bathroom means her 13-year-old daughter has just gotten her first period.
“Did the … did the red peony bloom?” her mom asks through the door.

Ming soon storms in with ibuprofen, vitamins, a hot water bottle and pads. Mei, unable to tell her mother what’s really going on, endures an uncomfortable conversation about how she’s now a woman and how her body is starting to change. 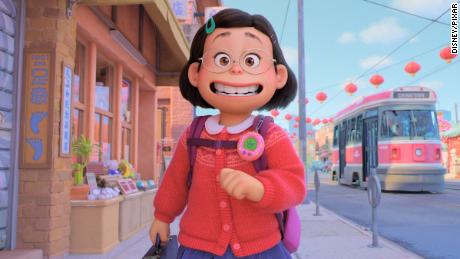 Mei is indeed undergoing a bodily transformation — just not the one her mom thinks. As Mei soon discovers, she poofs into a furry red panda when she’s overcome with emotion, reverting back only when she gets her emotions under control. Menstruation may not be what’s ailing Mei, but the metaphor for periods, puberty and the ensuing emotional roller coaster is clear.

By normalizing — and even celebrating — one of life’s most awkward phases, “Turning Red” does something not often seen on film and television, especially media aimed at kids. It treats periods and female puberty as something to be embraced, rather than be embarrassed about.

Though periods are an experience shared by half the world’s population for a significant part of their lives, they’re often regarded onscreen (when they’re regarded at all) with fear, shame or disgust. It’s a taboo that director Domee Shi was acutely aware of.
“You don’t see that very often in movies and TV shows,” Shi said in an interview with entertainment news site Uproxx, of the period talk between Mei and her mom. “And I think that’s precisely why we wanted to put it in the movie. I mean, this movie is actually is for 13-year-old Domee that was in a bathroom, horrified, thinking that she had crapped her pants. And too afraid to tell her mom or ask anybody about what was going on.” 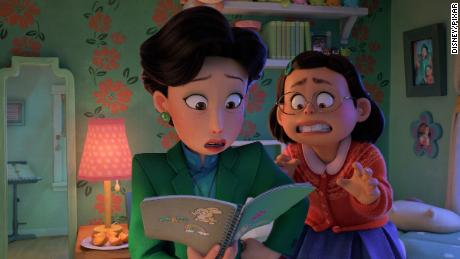 While positive period portrayals in kids’ and family-oriented movies and TV shows are rare, there are some notable examples. In a 1990 episode of “The Cosby Show,” in which Rudy gets her first period, the youngest Huxtable rebuffs her mom Clair Huxtable’s efforts to celebrate the occasion and turns to her friends for support. When the information she gets from her pals is faulty, it’s Clair who steps in to reassure her that periods are completely normal.
There was the 1991 episode of the sitcom “Blossom,” which saw its titular character struggling to talk to her dad about her first period and wishing she had Clair Huxtable to guide her. A scene from the 1991 coming-of-age film “My Girl” features Vada screaming that she’s hemorrhaging, only to be told that she’s gotten her period. A 2001 episode of the animated series “Braceface” sees Sharon mistake her menstrual cramps for appendicitis. And in more recent history, the ABC sitcom “Black-ish” treats Diane’s first period as an empowering experience.
Still, these examples tend to be the exception, not the norm. Tackling the subject of periods feels especially radical for an animation giant like Pixar, given that 20 of the 24 films released by the studio center males. But by addressing menstruation with candor and levity, the creators of “Turning Red” intend to destigmatize it — for everyone, not just young girls.
“The hope is with putting it on the screen and having it be something that is cringy, but also funny, and a part of this story, it does normalize it,” producer Lindsey Collins told pop culture and gaming news site Polygon. “There’s an appreciation from anybody who’s gone through it for what we put on the screen, but also those who haven’t gone through it.”

It also embraces the emotional extremes of puberty

Beyond periods, “Turning Red” explores puberty in all its uncomfortable glory — through the eyes of a confident, goofy Chinese Canadian girl. In the words of Shi, it’s an “Asian tween fever dream.”
Throughout the film, Mei navigates the awkwardness, excitement and embarrassment that come with changing hormone levels and manifest in her body as a red panda. She grapples with lust and attraction, crushing on the teenage convenience store cashier and members of her favorite boy band 4*Town alike. She imagines her objects of desire as mermen, then berates herself for doing so when her drawings are found out. She longs to see 4*Town in concert with her best friends, and vents to them angrily when her mom says no.
“From the very beginning, [I was] just really trying to not hold back with telling the story about a girl going through puberty. We’re going to go there,” Shi said in an interview with IndieWire. “From the very first version, it had pads, it had puberty, it had the weird boy crushes and drawings.” 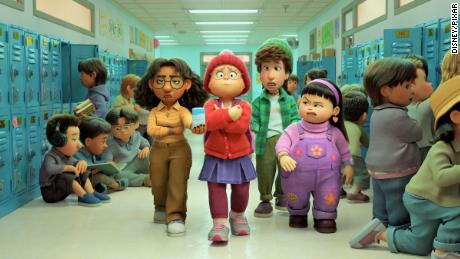 But perhaps the most profound challenge for Mei during this period of her life is figuring out how to be herself while also respecting the wishes of her parents — a coming-of-age dilemma surely familiar to many children of immigrants. As Mei discovers more about who she is, she finds that parts of herself conflict with the image her mother has of her. Learning to accept those parts of herself, while finding the courage to stand up to her mother, is part of Mei’s pubescent transformation, too.
Shi has said she hopes that “Turning Red” helps girls and women feel seen — and that it signals that periods, puberty and unwieldy emotions are simply a normal part of life.
Source: Read Full Article