Home » Business » Musso & Frank Grill To Reopen In Early May, Marking Yet Another Comeback For Hollywood 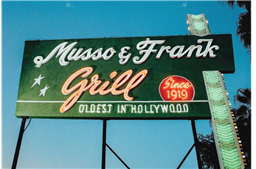 Musso & Frank Grill To Reopen In Early May, Marking Yet Another Comeback For Hollywood

As we all know, Hollywood loves a sequel. So the town will probably be absolutely delighted to know that its oldest grill is making a comeback in early May.

The venerable Musso & Frank Grill, which has seen a large number of celebrities, musicians and executives grace its twin dining areas over the years, will reopen on Thursday, May 6. Like other businesses in the city, Musso & Frank has been shut down for the last year following a Los Angeles countywide public health order. Save for an aborted attempt at establishing a delivery service, it’s been dark since the pandemic closed Hollywood.

The restaurant has been in dozens of films and TV shows over the years, including The Kominsky Method, Bosch, Swingers, the 2001 version of “Ocean’s 11, Ed Wood, Mad Men, Ray Donovan, and most recently Quentin Tarantino’s 2019 feature film, Once Upon A Time in Hollywood.

The Musso & Frank Grill celebrated its 100th anniversary in September 2019. In a new twist, the restaurant will now be open on Mondays starting at 5 PM, a change from its longstanding tradition of being shuttered at the beginning of each work week.  .

Mark Echeverria, COO, CFO and a fourth-generation member of the family of owners, said that all current Covid-19 safety precautions will be upheld, along with the restaurant’s vibe.

“With our reopening, we’re being very careful to ensure that our 100-plus years of tradition won’t change at all,” Echeverria said. “For instance, our menu will remain as intact as possible – we want to keep all of our original offerings.”

New guidelines are in place. An assisted parking system will be used instead of a traditional valet service. The restaurant’s valets will guide customers to parking spaces, but will not drive a customer’s car unless asked to do so.

At the door, a manager or host will ensure a distance of six feet is maintained, and masks will be required to be worn at all times except when seated at dining tables. All guests will be asked to wear a cloth face covering at all times when he/she is away from his/her table. Diners will also be asked to clean their hands with hand sanitizer upon their arrival. Hand sanitizer stations will be provided at multiple locations in the restaurant.

The restaurant will operate at 50% of the building’s normal occupancy, thus adhering to LA County’s “Orange Tier” reopening guidelines. As the tier assignment changes in the coming months, the restaurant occupancy will also change.

Table spacing will be adhered to according to the guidance provided by the county. Groups will be limited to six people. Server assistants will lay out table settings, glasses and silverware only after each party has been seated. Only single-use menus that are printed daily will be used.