Nando’s says it plans to have all its restaurants open again from Saturday after supply chain disruption forced 45 sites to close.

The peri-peri chicken brand, which operates about 400 outlets across the country, has also “hit pause on delivery for now” according to a message on its website.

It is the latest household name business to be hit by supply chain disruption and comes as a major poultry supplier separately told Sky News that Brexit had left its workforce “severely depleted”. 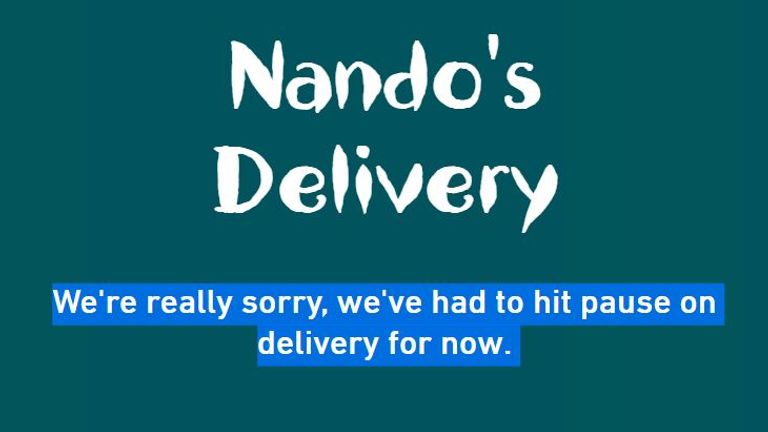 Details of the Nando’s closures first emerged on social media as customers complained about their local restaurants being shut.

The company responded that “the UK supply chain is having a bit of a ‘mare right now” though sites in Northern Ireland and the Republic of Ireland have not been affected.

It said in a statement on Wednesday: “The UK food industry has been experiencing disruption across its supply chain in recent weeks due to staff shortages and a number of our restaurants have been impacted.”

Nando’s has seconded some of its staff to help suppliers and said this had “already had a positive impact on affected restaurants”.

“From this Saturday, it is our intention that all of our restaurants will be open again,” the company added.

Nando’s did not publish a full list of restaurants that have closed saying details were continually changing. But it did respond to queries about individual sites from customers on social media, disclosing that sites in Chelmsford, Showcase Nottingham, and Cribbs Mall in Bristol were among those experiencing disruption.

The closures come after rival KFC revealed last week that it was facing similar problems, warning that some items would not be available and packaging “may look a bit different to normal”.

Supply chains have come under strain in recent weeks with the haulage industry complaining of a shortage of 100,000 drivers – partly blamed on Brexit and exacerbated by a spate of workers being forced to isolate when alerted by the NHS COVID app.

Supermarkets were also affected by the so-called “pingdemic”, resulting in empty shelves in some stores, though the issue seems to have abated after the app was tweaked to ensure fewer contacts of those infected were ordered to stay at home.

Avara Foods, a chicken and turkey supplier which says it serves some of the biggest supermarkets and restaurants in the country, blamed its current problems firmly on Brexit.

The company told Sky News in a statement: “Our company is not currently experiencing any significant inconvenience regarding the ‘pingdemic’.

“Colleague isolations, relative to our size, are low.

“Our concern is recruitment and filling vacancies when the UK workforce has been severely depleted as a result of Brexit; this is causing stress on UK supply chains in multiple sectors.

“Labour availability is an issue totally separate to the pandemic, and one which has the potential to affect UK foods manufacturing for a lot longer.”