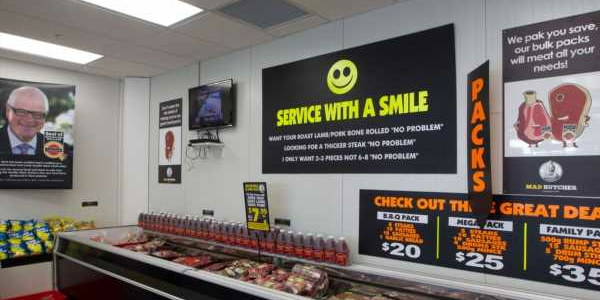 Green Family Butchers, trading as Mad Butcher Pukekohe, was placed into liquidation in May 2020 with Victoria Toon of Corporate Restructuring appointed at the time. However, she has since resigned and Catherine and Peter Jollands of Jollands Calendar have replaced her.

Peter Jollands, who has been liquidator for a large number of dissolved companies formerly trading under the Mad Butcher brand, would not disclose exactly why his firm had taken over the liquidation case, other than “there were further issues that may be relating to Green Family Butchers”.

The focus was on investigating matters that the previous liquidator found, Jollands told the Herald.

He would not disclose what these matters were. However, Toon’s most recent report released late last month stated the new liquidators “will be pursuing legal action against the franchisor as part of a group action”.

The legal action against franchisor Mad Butcher Holdings stems from a number of issues, including concerns over the operating model being unsustainable, Jollands said.

Last year liquidators took separate legal action against Mad Butcher Holdings in another case and were successful in their application to the High Court. Mad Butcher counter-sued the liquidators for $750,000, but lost on both counts and Catherine and Peter Jollands were ultimately awarded costs, Jollands said. He did not disclose specifics.

Green Family Butchers Ltd was run by Roy and Amanda Green. Roy Green passed away last year shortly after the company was first placed into liquidation.

Mad Butcher Pukekohe is still trading, now run by a separate party that took over the store lease from the Green Family.

Jollands said the “flawed” Mad Butcher operating model was having devastating effects on franchise operators and their families.

“I said right at the outset in 2017 to the media that the Mad Butcher business model was flawed and as such is unsustainable. I also said that back in 2016, and I can say it again now.

“I am the liquidator of six Mad Butchers and I am aware of the Whangarei case and other litigation [cases], including our own, and I am more than convinced of what the damage has been to families to marriage break-ups to suicides, and I refer you to Roy Green as one of note which is a very, very sad thing when people are so stressed that they take their life into their own hands.”

Prior to resignation, Toon’s first liquidator’s report found Green Family Butchers Ltd had “increasing costs and a lack of cash flow resulting in the company being unable to pay their debts”. Its revenue further declined due to the Covid-19 pandemic.

Following her investigation, Toon found that it owed creditors a combined total of $751,543.

Her second report concluded by saying that “the liquidator will now resign in favour of Peter Jollands and Catherine Jollands. The new liquidators will be pursuing legal action against the Franchisor as part of a group action.”

More than 20 Mad Butcher franchises have folded in the past few years, with Jollands on several occasions citing that the business model as no longer viable.

The Mad Butcher business, which was previously owned by NZX-listed Veritas, is now co-owned by Michael Morton and partner Julie Leitch, the daughter of original founder Sir Peter Leitch.

The first franchised Mad Butcher outlet opened in 1998. The company was majority owned by Sir Peter Leitch until 2007. Morton, and Leitch bought back the business in July 2018.

Mad Butcher store numbers have decreased dramatically over the past few years. The butcher chain once had 40 stores throughout the country. Today, about 20 remain.