New York filed a lawsuit against Amazon in state court on Tuesday accusing the online retail giant of violating coronavirus safety protocols in its facilities.

State Attorney General Letitia James said the complaint was the result of an investigation into Amazon starting last March, when workers first complained of pandemic-related hazards. The lawsuit alleges Amazon failed to comply with state health guidelines at a large fulfillment center on Staten Island and a smaller delivery facility in Queens.

According to the complaint, Amazon disregarded state protocols on contact tracing and cleaning and disinfecting workspaces, and enforced productivity quotas that prevented workers from taking proper safety precautions. James’ office said Amazon regularly failed to identify and inform workers who had come in contact with colleagues stricken by the virus.

The lawsuit also accuses Amazon of retaliating against two workers who raised safety complaints. The company fired one of those workers, Christian Smalls, and disciplined the other, Derrick Palmer. The complaint seeks back pay, damages and work reinstatement for Smalls, and damages for Palmer.

In a statement, James said Amazon and its chief executive, Jeff Bezos, “made billions” during the crisis while workers “were forced to endure unsafe conditions.”

“Since the pandemic began, it is clear that Amazon has valued profit over people and has failed to ensure the health and safety of its workers,” James said. “The workers who have powered this country and kept it going during the pandemic are the very workers who continue to be treated the worst.” 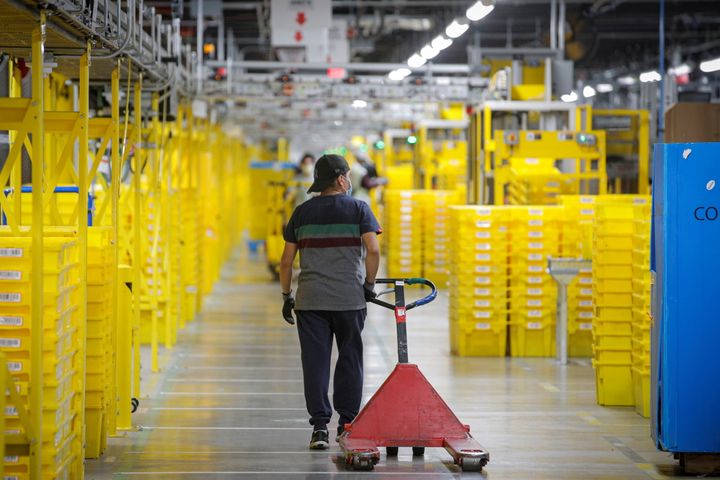 An Amazon spokesperson did not immediately respond to a request for comment.

The lawsuit alleges Amazon broke the law by ignoring pandemic-specific guidelines issued through the state health department and an executive order from Gov. Andrew Cuomo (D). In the case of Smalls and Palmer, the lawsuit says Amazon violated New York law protecting whistleblowers against retaliation.

Amazon’s decision to punish the two workers had a “devastating chilling impact” on other workers considering coming forward with safety concerns, the complaint states.

The complaint also alleges that Amazon’s monitoring of the time workers spend not filling orders ― a concept inside the company known as “time off task” ― has made it impossible for workers to do their jobs safely amid a pandemic. The company can track that time through the handheld scanners workers use to do their jobs. The complaint states that Amazon suspended punishment for time-off-task early in the pandemic but reinstated it by October 2020.

Discipline for time-off-task “has severely hampered the safe practices that are necessary for employees to maintain social distancing, clean their workstations, and engage in the sorts of hygiene and sanitation practices necessary to fully protect themselves and co-workers during the COVID-19 pandemic,” the complaint says.

The New York lawsuit brings another bit of scrutiny to the working conditions inside Amazon’s warehouses. The company has seen explosive growth during the pandemic as homebound shoppers get even more of their goods online, but workers at facilities around the country have complained about the work pace and lack of transparency on infections.

The company is also facing its most realistic unionization threat ever on U.S. soil, with workers in Alabama now voting by mail on whether to join the Retail, Wholesale and Department Store Union. If the union wins, it would represent roughly 6,000 workers at a fulfillment center outside Birmingham, leading to organizing drives at other Amazon facilities.