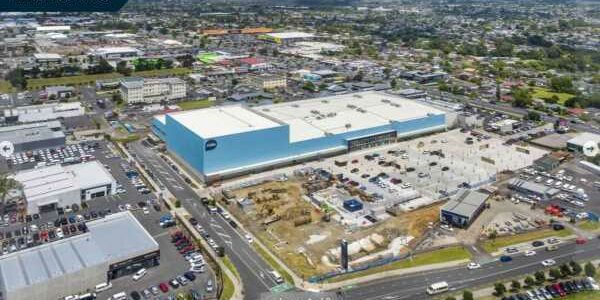 New Zealand’s biggest homewear store is up for mortgagee sale, following the builder’s liquidation and the trader’s receivership.

In a third disastrous move, Bayleys is now advertising the 27,000sq m Nido store in west Auckland’s Henderson, standing on a 3.1ha site.

But whether it will sell for $62 million and recoup lender and investors’ money is unlikely.

The sale also raises questions about the $62m syndication-style of the scheme whereby shares were sold in Nido property owner Central Park Property Investment, including to retired farmers in the New Plymouth and Hawera areas.

Kare Johnstone of receivers McGrathNicol, said the store is still open, with all stock heavily discounted. The company she works for are receivers for Magsons Hardware, trading as Nido.

“We expect the wind-down and closing sale to take approximately three weeks. This has been disrupted by Auckland moving to alert level 3 but we will be open for business to continue with our closing down sale,” Johnstone said on the weekend.

“The ultimate date of closing the doors will depend on the level of sales over the coming weeks. Customers will be made aware of the exact date nearer the time but while we still have significant stock across a wide range of product categories they’d better be quick,” she said.

Bayleys’ advertising said: “For sale by way of international mortgagee tender.” It wants responses by April 14.

“Designed for occupation by a furniture retailer, the property offers a unique opportunity to occupy, redevelop, or repurpose the existing near new improvements to suit. The property is extremely well located at the start of the well established, popular Lincoln Road retail precinct. The North Western Motorway provides ease of access to the wider Auckland area and importantly, significantly increases the catchment for the retail offering,” Bayleys says.

“Underpinned by a large strategic landholding, the property presents creative developers and add-value investors a wide range of alternative uses and re-development possibilities, including the potential to split into smaller tenancies, all subject to council consent, or alternatively provides a readymade solution for owner-occupiers in relation to all or part,” the advertising said.

Properties of this scale were a rarity, not only in West Auckland, but also the greater Auckland region, Bayleys said.

Pearlfisher Capital loaned $25m short-term debt financing is said by those in the sector to have called up the loan although Pearlfisher would not confirm or deny that.

In response to questions about the Nido property, Pearlfisher’s Tony Abraham acknowledged the lender was first in the queue for repayment.

“As first mortgagee funder of the land and buildings where the Nido store has been constructed, Pearlfisher Capital’s loan was made to Everest Capital Investments, a Financial Markets Authority approved investment offering. This offering was being independently promoted by Maat Group as the promoter of the Central Park Property Investment Limited syndicate,” Abraham said.

Financiers in Auckland said they were unsurprised by the sale of the failed business because that was the next logical step.

“None of the major trading banks would have loaned on this. Nor would they act as aggressively to the detriment of mum and dad investors,” one said, referring to the retired farmers, two of whom put $1m each into the scheme.

The options were now to “re-tenant the property and manoeuvre to protect investor funds long term,” the executive said.

The directors of Central Assets Investment last year appointed McGrathNicol as receivers and managers of Magsons.

“The directors concur with McGrathNicol’s assessment that the timing of the opening of the store in the year of the pandemic created acute pressure on the financial success of the store. It is very disappointing that the vision of the founder of Nido, Vinod Kumar, could not be realised,” the statement said.

Central Assets Investment is headquartered at the offices of Maat Consulting at Albany which managed the $62m financial offer.

Central Assets Investment said last year they “concur with McGrathNicol’s assessment that the timing of the opening of the store in the year of the pandemic created acute pressure on the financial success of the store. It is very disappointing that the vision of the founder of Nido, Vinod Kumar, could not be realised.”