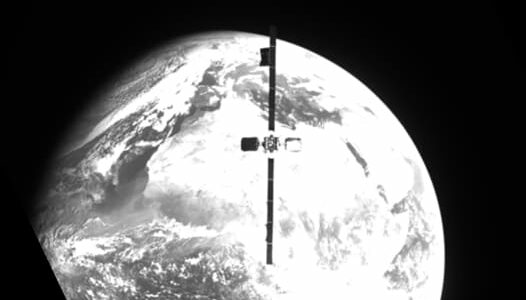 Two aerospace firms accomplished an industry first on Monday, as a small Northrop Grumman spacecraft docked successfully with an active Intelsat satellite to provide service and extend its life.

Intelsat's IS-1002 satellite is nearly 18 years old, and operating well past its expected lifespan, but the Northrop Grumman-built spacecraft called MEV-2 will add another five years of life to IS-1002, essentially re-fueling the satellite and giving it a new engine for control.

The companies hit a milestone in the growing business of servicing satellites while in space.

"Today's successful docking of our second Mission Extension Vehicle further demonstrates the reliability, safety and utility of in-space logistics," Tom Wilson, vice president of Nothrop Grumman's strategic space systems said in a statement. "The success of this mission paves the way for our second generation of servicing satellites and robotics, offering flexibility and resiliency for both commercial and government satellite operators, which can enable entirely new classes of missions."

Extending the life of an active spacecraft in orbit has only been done with human help before—such as the Hubble telescope servicing missions conducted by NASA astronauts.

Launched in August on an Arianespace Ariane 5 rocket, the robotic MEV-2 spent the last several months traveling out to the satellite. MEV-2 then matched its orbit before successfully docking, while also providing unique imagery of the satellite as the spacecraft approached.

IS-1002 was launched in June 2004 and was only intended to be in service for 13 years, providing broadband communications services to Europe, South America, Africa and the Middle East. The satellite is in a fixed position above the Earth in what is known as geosynchronous orbit—tens of thousands of miles up to provide as wide a coverage area as effectively possible.

The MEV-2 mission builds upon the success of Northrop Grumman's MEV-1 mission last year, which docked with an inactive Intelsat satellite. That satellite was in a "graveyard orbit," meaning it was no longer providing services, but MEV-1 restored it and moved the satellite back into position.

The MEV-2 spacecraft, while similar to MEV-1, took that mission a step further by docking and extending the life of a satellite currently in service. This means there was more risk involved, given that IS-1002 is serving customers, including providing television services to more than 18 million households in Europe.

Northern Sky Research, a satellite consulting firm, estimates that the market for satellite servicing and life extensions is a $3.2 billion opportunity over the next decade.

The firm forecasts that there is demand for servicing upward of 75 satellites by 2030, with companies and governments looking to extend the lifespan of typically expensive geosynchronous equatorial orbit satellites, rather than launch replacements.