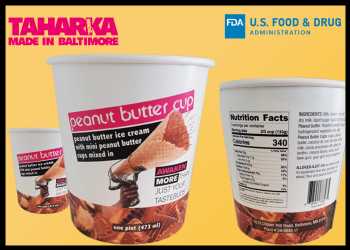 The affected Peanut Butter Cup ice cream was distributed between March 1 and May 28, 2022 to the Maryland and DC area through grocery stores, scoop shops, restaurants, and direct to consumer delivery.

The recall was initiated after routine testing by ingredient supplier J. M. Smucker revealed the presence of Salmonella in some of their peanut butter products.

The FDA, along with the Centers for Disease Control and Prevention or CDC and state and local partners, are investigating the salmonella outbreak, in which 14 people were ill, including 2 hospitalizations.

Salmonella is an organism that can cause serious and sometimes fatal infections in young children, frail or elderly people, and others with weakened immune systems. The food-born illness’ symptoms include fever, nausea, vomiting, diarrhea or bloody diarrhea, and abdominal cramps.

Infection with Salmonella can result in the organism getting into the bloodstream and producing more severe illnesses such as arterial infections, endocarditis and arthritis.

Baltimore, Maryland -based Taharka Brothers has not received any reports of illnesses or health-related complaints in connection with the recall to date. However, the outbreak associated with the consumption of Jif peanut butter is ongoing.

Customers are urged to dispose the recalled ice cream and to contact the company for an exchange or refund.