Home » People are hoarding toilet paper. The truth about the supply chain

Sales of toilet paper dropped 32.7% in the 12 weeks ending April 3 from the same period a year ago, according to market research firm NielsenIQ, which tracks point of sale data from retailers.
In the same period, purchases of paper towels fell 18.3%, and multipurpose wet wipes sales are down 15.7% versus a year ago.

The declines could be reflected in the sales results of companies like Procter & Gamble (PG), Kimberly-Clark (KMB) and Clorox (CLX), all of which are scheduled to report earnings this month. 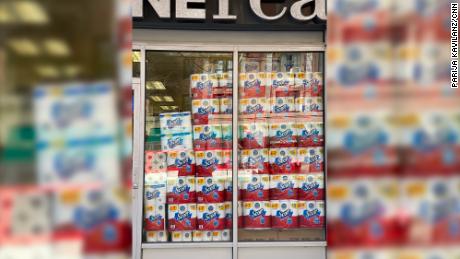 NielsenIQ said that, overall, sales of household and cleaning products remain higher than they were pre-pandemic, but they have come down from the early pandemic months as consumers are buying at a more normal pace instead of hoarding. This has also allowed suppliers to replenish inventory to keep up with demand.

Toilet paper was the only category to show a sales decline in the 52-week period ending April 3. Sales fell 0.2%.
Toilet paper, oddly, came to symbolize the anxiety that set in when the coronavirus first arrived and then rapidly spread in the United States in early 2020.

While some toiler paper producers were able to accelerate production and reallocate inventory to meet the demand spike, others were hamstrung in their efforts to boost output because their factories were already operating at fixed capacity.
In general, consumer goods companies had to be careful about dramatically increasing production to avoid having a glut of products when demand inevitably declined.
Source: Read Full Article