New York (CNN Business)Black Friday doesn’t carry the significance it once did for many US shoppers — blame the rise of online shopping holiday “Cyber Monday” and then Covid-19’s impact on retail.

But customers are still dishing out more money for clothing, electronics and other items this Black Friday as they return to visit stores in person and keep up their spending online.
Sales on Black Friday increased 29.8% from a year ago, according to estimates through 3 p.m. ET from Mastercard, which tracks payment data in stores and online, excluding car sales. E-commerce sales grew 10.6% from last year, while in-store sales increased 42.9%. 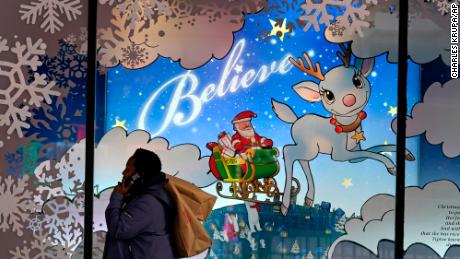 “Retail spending has been on the rise throughout the day and it speaks to the strength of the consumer,” said Steve Sadove, senior advisor for Mastercard. “We anticipate a positive holiday season well beyond Black Friday.”

Clothing sales led the growth, increasing 86.4% on Black Friday from a year ago when shoppers were mostly at home and didn’t have much reason to spruce up their wardrobes.

These trends mark a reversal from 2020, when retailers limited their doorbuster deals to prevent overcrowding in stores and pushed shoppers to buy online instead. Online sales on Black Friday surged 85% in 2020 from the year prior, but overall sales dipped 16.1%.
This year, retailers bet on a strong holiday.
Retail sales in November and December are expected to grow between 8.5% and 10.5% this year compared with the 2020 holiday season, to a record of up to $859 billion, projected the National Retail Federation, a trade group for retailers. The figure excludes car dealers, gas stations and restaurants.
Federal stimulus payments to households and families since the onset of the pandemic elevated savings rates, and rising wages are expected to propel consumer demand during the holidays, NRF predicted.
Retailers kicked off their holiday deals in October to try to spread out the holiday season. They did this in part to prevent a crush of demand on Black Friday and Cyber Monday, which can strain stores and logistics networks.
Chains also encouraged shoppers to buy early and avoid waiting in case the product they want sells out. Retailers have been navigating high demand from consumers, as well as delays and shortages getting goods to shelves due to ongoing supply chain hurdles.

Deborah Weinswig, CEO of retail research and advisory firm Coresight Research, visited stores in Boston and Providence Friday. Out-of-stock items were most noticeable in furniture and for clothing basics such as denim jeans, khakis, underwear and socks, she said in a report.
Still, Weinswig said traffic was strong at home goods and department stores and projected strong profits for retailers this holiday because they were offering fewer discounts.
Source: Read Full Article