Home » Business » Rising Debt, Falling Income: How to Dig Out

Rising Debt, Falling Income: How to Dig Out

Ms. Barajas is among a growing number of retirees and those approaching retirement who are in debt. Her struggle began after she retired in 2004 to care for her sick father. When he died a year later, she returned to work as a substitute teacher. Even with those wages and her $1,600 monthly pension, her income was half of what she had earned before she retired, she said.

“The bills were piling up,” said Ms. Barajas, who is 73 and divorced. “I was getting behind in everything — mortgage and insurance and utilities.”

In 2012, her daughter, who was divorced, was diagnosed with cervical cancer. Ms. Barajas moved her, her two grandsons and their three dogs into her home, and she cut back on work to care for them.

Ms. Barajas sold her daughter’s house after she died two years later, setting aside the $20,000 in proceeds for her grandsons’ college costs. She sold off her daughter’s appliances and furniture, as bills came due. She even dropped Medicare Part B — which covers doctors’ visits — to cut premium costs.

Ms. Barajas had refinanced her mortgage, which raised cash but also increased her debt. When she fell three months behind on her payments, the lender began sending foreclosure warnings.

“I was scared,” she said. “I had the boys and the puppies. Where were we going to go?” Three years ago, she filed for bankruptcy.

According to the Employee Benefit Research Institute, the share of households headed by someone 55 or older with debt — from credit cards, mortgages, medical bills and student loans — increased to 68.4 percent in 2019, from 53.8 percent in 1992. Bankruptcy rates among older adults are also rising.

The Covid-19 pandemic may be adding to their woes. A survey at the end of 2020 by Clever, an online service that connects home buyers and sellers with real estate agents, found that on average, retirees had doubled their nonmortgage debt in 2020 — to $19,200.

Francesca Ortegren, the data science and research product manager for Clever, said business cutbacks had forced many older adults to retire earlier than planned. Others left work for health reasons or to care for family members, she said.

“They had expected to have more time to save money,” Dr. Ortegren said. “They are putting their expenses on their credit cards and are carrying balances month to month.”

Also driving this rising debt load are soaring medical costs, the steep decline in pensions, growing housing expenses and low interest rates on savings. To make ends meet, many older adults are known to skip meals and to cut pills to stretch prescriptions, according to a survey by the National Council on Aging.

“Debt often forces them to make short-term trade-offs that can have a long tail on their overall health and financial well-being,” said Ramsey Alwin, the council’s president and chief executive officer.

Ms. Alwin is convinced that the stress from medical debt her father racked up after two heart attacks contributed to his death in 2016 at age 61. His medical insurance did not cover much of the cost for quadruple bypass surgery and a stent. Her father, a lobster fisherman in Maine, had to reduce his work hours, which lowered his income.

It was only after he had died that Ms. Alwin and her brother learned of his financial struggles. He had cashed out his life insurance, worked out payment plans with hospitals and paid some doctors with lobsters.

“He was a very proud individual,” she said. “He was still playing the role of Captain Jim.”

A starting point in paying off debt is consulting a nonprofit credit counseling agency, which will review a client’s expenses and income sources and create a custom “action plan,” said Bruce McClary, senior vice president for communications at the National Foundation for Credit Counseling. The initial budgeting session is often free, he said.

An action plan could include cutting unnecessary spending. For example, older adults can free up insurance and maintenance costs by selling a car they seldom drive, banking some proceeds for taxi fare.

“The average individual 65-plus on a fixed income is leaving $7,000 annually on the table” in unused benefits, she said.

Another possible source of cuts: shutting off the cash flow to adult children. People who provided financial help to their children and grandchildren — for rent, down payments for a home, medical bills — are more likely to have mortgage and consumer debt than those who did not, according to EBRI. The nonprofit group found, for example, that 59 percent of people ages 65 to 74 who helped family members carried debt, compared with 47 percent who did not help.

Melinda Opperman, president of Credit.org, a nonprofit debt counseling agency in Riverside, Calif., said the pandemic had led retirees to shell out even more for their children. “Family members are coming to the patriarch to help them with their financial situation,” she said.

Even before the pandemic, she said, many clients paid their adult children’s expenses, including cellphones and student loans they had co-signed years earlier. Ms. Opperman said parents needed to tell family members that those costs “are jeopardizing their ability to have a dignified retirement.”

Older people use high-interest credit cards to fill income gaps, but those bills can be particularly stressful for those on fixed incomes who can afford to make only minimum payments, Mr. McClary said.

“It can be depressing when they see their later years of life consumed with making payments and not making much of a difference,” he said. He recommended that retirees ask the credit card company for a lower interest rate.

Older adults often unintentionally increase their high-interest debt by placing expenses on cards that they could pay off in less costly ways, counselors say.

For example, medical bills typically charge little or no interest but turn into high-interest costs if placed on credit cards, Ms. Opperman said. Instead, she said, patients should call hospitals or other providers directly to work out an arrangement. “Many providers can set up repayment plans, and sometimes they will make concessions on behalf of the patient,” she said.

Retirees should also avoid taking out home-equity loans or lines of credit to pay off credit cards or medical bills, said Rose Perkins, quality assurance manager for CCCSMD, a credit counseling service in Columbia, Md. Though tapping home equity carries a lower interest rate than a credit card, a homeowner could put a home at risk if a job loss, the death of a spouse or illness made it difficult to pay off the lender, she said.

“The consumer has increased the amount they owe on their home, so if they cannot meet the down payment for any reason, they are at risk of foreclosure,” Ms. Perkins said. If other cost-cutting options do not work, credit counselors say, a retiree could downsize to a smaller home or take out a federally insured reverse mortgage. A credit counselor or a certified financial planner could help a homeowner decide if a reverse mortgage, which is a complex product, would fit into an overall debt-reduction plan, experts say.

In some instances, a nonprofit agency may recommend that a client enter a debt management plan. Counselors will negotiate with creditors to reduce interest rates and fees and to agree to a repayment plan, which could take up to five years to complete.

“We do not settle the debt, but the client does have lower monthly payments,” Ms. Perkins said. 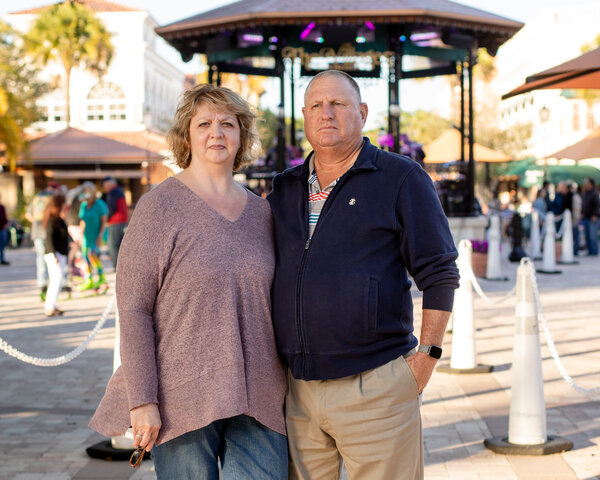 Her clients included Jacquelyne and Michael Baas. In 2013, the couple had moved from Indianapolis to the Villages, a large retirement community in Central Florida, where Mr. Baas’s ailing parents lived. Both divorced and newly married, they bought a $130,000 two-bedroom house, using his savings for a down payment.

They paid for their groceries, utilities and the monthly $1,100 mortgage payment with Mr. Baas’s Social Security and small pension and Mrs. Baas’s income as a registered pharmacy technician.

“We started fixing things up on the inside and the outside, so the house would look livable,” said Mr. Baas, 62, a retired elementary school physical education teacher. They replaced appliances, changed the drapes, pulled up the carpet and planted two palm trees.

Everything went on credit cards, including store-issued cards from Home Depot and Ashley HomeStore. “They make it very easy for you,” Mrs. Baas said. “It all snowballed.”

Ms. Perkins negotiated with their credit card companies, paying each company every month with money her agency draws from the couple’s bank account. The couple’s monthly payment dropped to $612, which goes mostly toward principal. They place the $300 monthly difference into savings.

“I am 100 percent confident I will not let it happen again,” Mrs. Baas said. “We have one credit card for emergencies, and we are living comfortably.”

Still, some older people, such as Ms. Barajas, turn to more drastic steps. As part of her five-year bankruptcy settlement, her monthly pension goes toward her mortgage, car loans and other debt. She said she hoped those payments would free her from debt in two years.

In the meantime, she covers her living expenses with the $2,000 a month she earns as a full-time substitute teacher, though her income dropped when schools closed during the pandemic. Her son pays for food and helps with other expenses, she said.

Though retirement is off the table for a while, Ms. Barajas said she enjoys her job and numerous volunteer political activities.

“I am happy with my boys,” she said. “We can’t afford restaurants, but we cook, and we are good company here. At this moment, we are surviving.”