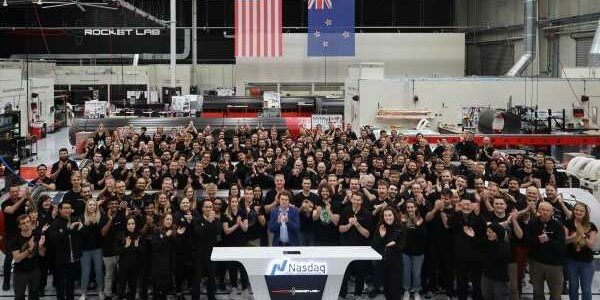 Founder and CEO Peter Beck rang the Nasdaq’s bell to start Wednesday trading (at 1.30am Thursday NZT) – in a virtual ceremony because of Covid travel restrictions.

New shares were issued at US$10.00 each as Rocket Lab backed onto the Nasdaq through a merger with shell company Vector Acquisition that assigned Rocket Lab an equity value of up to US$4.8b.

Data was scarce with the Nasdaq’s website a sea of “N/A”s for Rocket Lab, and many financial sites still listing now outdated stock-outstanding numbers from Vector’s listing as the ticker changed from VACQ to RKLB. A spokeswoman for Rocket Lab said there were 499m shares following the closure of the Rocket Lab-Vector transaction, implying a market cap of just over US$5.2b at US$10.45 per share.

As his company’s newly listed stock swooped up and down, Beck told CNBC he hasn’t “really even been watching it. At the end of the day, we’re in this for the long term.”

Around 6000 Kiwis put money into the listing by buying shares in the already-listed Vector via Sharesies, Hatch and other platforms.

Beck had the option to redeem up to US$30m worth of stock options with the Vector transactions. This morning, a Rocket Lab spokeswoman said, “Peter did not exercise options, but rather sold a small fraction of his holdings in the Management Redemption.”

The founder who holds around 13.1 per cent of stock – worth around US$676m ($955m) – earlier told the Herald that the Nasdaq listing would turn more than 100 past and present Rocket Lab staff into millionaires, while more than 180 would hold stock worth around $500,000 – thanks to shares being granted to “high performers” over the years.

Other local shareholders include ACC’s investment arm, early Rocket Lab staffer Mark Rocket and Sir Stephen Tindall’s K1W1, all of whom have holdings under the 5 per cent disclosure threshold (none would comment on whether they planned to sell shares with the listing). Other investors include US defence and aerospace giant Lockheed Martin, the Australian government’s Future Fund and a clutch of Silicon Valley venture companies.

In a statement this morning shortly before Rocket Lab started trading under the ticker RKLB, the company said the closure of its transaction with Vector had raised US$777 million before listing expenses. Before the deal, Rocket Lab had around US$48m in cash.

Earlier this week, Beck confirmed to the Herald that some of the funds – expected to be a net US$48m – would be used to develop Rocket Lab’s larger, crew-capable Neutron rocket, scheduled for its first launch in 2024.

“So we’re looking to do more of that. So watch this space. Satellites and space systems is certainly an area that we’re keen to focus more on.”

In April last year, Rocket Lab bought Canadian company Sinclair Interplanetary for an undisclosed sum. Beck said the deal would accelerate development of Rocket Lab’s Photon spacecraft – or “satellite bus” – which has two versions: one designed to manoeuvre satellites into low Earth orbit, the other for interplanetary missions.

Later this year, as part of a $14m contract, a Photon will ferry a Nasa satellite into lunar orbit. Rocket Lab also won a contract with the US space agency to design and build two Photons that will go into orbit around Mars in 2024 to study the Red Planet’s atmosphere. A Photon is also slated to go to Venus in 2023 in a privately-funded mission.

Space systems only account for a tiny fraction of Rocket Lab’s revenue today, but the company projects the segment will account for around 40 per cent of its revenue, which it has forecast to investors will grow from under US$100m today to more than US$1.57b by 2027 as it moves from making a loss today to operating earnings of US$505m by FY27.

Beck: US listing good for NZ

“It’s a super exciting time for Rocket Lab, obviously,” Beck told the Herald ahead of the opening bell.

“No, I just think it’s, you know, it’s a super exciting time for rocket lab, obviously. But I think, you know, we certainly hope that this is kind of somewhat of a symbol for New Zealand and taken you know, tech entrepreneur.

“I’d love to see many New Zealand companies follow in our footsteps and end up on the Nasdaq.”

In a guest op-ed for the Herald, Beck said Kiwis should not shy from seeking investment from offshore, and going global.

“The benefits to New Zealand go far beyond just the space industry. The immediate Rocket Lab ecosystem has directly incubated startups founded by our engineers. I’m committed to investing in the businesses founded by our incredible team members and the Nasdaq listing only strengthens the ability to do so. Halter, Partly, Foundry Lab, Astrix Astronautics, and Outset Ventures are all examples of this, with many more expected to follow from the injection of capital into the hands of hundreds of smart, motivated young people,” the one-time Fisher & Paykel apprentice wrote.

“It is only through our relationships with Silicon Valley that we’ve been able to shine a light on New Zealand technology and attract investors who have the funding, expertise, and networks to support our country’s best ideas and most ambitious entrepreneurs. Several Rocket Lab investors have subsequently invested in other New Zealand companies, a trend we expect to see continue thanks to the profile our Nasdaq listing gives New Zealand overseas.”

Rocket Lab’s Neutron will launch exclusively from the company’s new Launch Complex 2 in the US state of Virginia – in part to cater to the local-launch requirements of its two largest customers: the US military and Nasa.

But Beck added that the new rocket will be simply too large for NZ.

“The Neutron will initially launch out of the United States for industrial base reasons,” the CEO told the Herald.

“To give you a sense of the scale, if we took all the liquid oxygen that’s produced in New Zealand, we’d only fill half the tank, let alone all the other kind of logistics that are associated with these very, very large launch vehicles.”

However, most Electron launches would continue to take place from Mahia, Beck said, and New Zealand would continue to host the majority of his company’s staff, which today stands at around 600, with a hiriing drive aimed at lifting that to 700 in the near-term.