SAG-AFTRA, as part of its efforts to create a safer work environment for actors performing in scenes involving nudity, simulated sex and other intimate scenes, has released a list of qualified and experienced intimacy coordinators.

The list includes the names and contact information for 40 intimacy coordinators from the United States, the UK, Canada and Australia who have met the union’s recommended standards for qualifications, vetting and training — and who have a minimum of 60 days of experience — as well as the names of five others who have proof of training and at least 25 days of experience.

“As we, at long last, move into a time where a performer’s personal space matters, a new field has emerged: intimacy coordinators. This is an important step forward for all SAG-AFTRA members and will improve the atmosphere on sets and in productions requiring intimate scenes. With the presence of the intimacy coordinator, performers will be protected in potentially vulnerable situations.

“These professionals function as an advocate and liaison between performers and productions, facilitating communications and helping with movement and choreography when nudity and intimate scenes are being filmed. It is as much to the benefit of the production as it is for the performer.

“Long gone is the time when married characters are shot sleeping in twin beds, so the need for specially trained intimacy coordinators should be part and parcel of every production that involves nudity, simulated sex or hyper-exposed scenes. With the advent of intimacy coordinators to any production, we continue to move the needle forward to creating a more honorable industry that is respectful to the feelings of all those participants who make it great.”

“SAG-AFTRA has worked hard in cooperation with the intimacy coordinator community to establish standards that can ensure that producers have access to qualified intimacy coordinators to work with our members on SAG-AFTRA productions,” said Duncan Crabtree-Ireland, the union’s national executive director. “Intimacy coordinators are a crucial protection for performers working in intimate scenes. This essential resource will further normalize and promote the use of intimacy coordinators, helping to change the culture in Hollywood and beyond.”

SAG-AFTRA noted that its registry and pre-registry lists “are provided as a resource for employers for informational purposes only and are not intended to imply an endorsement of any individual or company by SAG-AFTRA.”

The release of the lists follows the establishment last year of the first industrywide accreditation for intimacy coordinator training programs and build on the Standards and Protocols for the Use of Intimacy Coordinators originally introduced in January 2020. “Together,” SAG-AFTRA said, “the accreditation standards, protocols and registries will help protect and support SAG-AFTRA members and ensure they are able to work in a manner that maintains their personal and professional dignity while realizing a director’s creative vision.”

Watch Livestream Of Primetime Hearing On Capitol Attack: Who Is Testifying & When 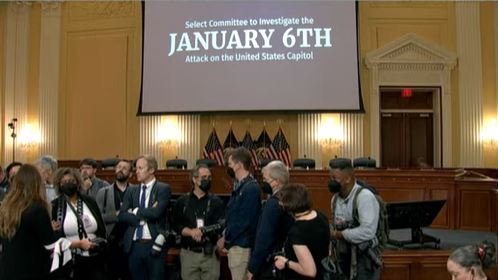