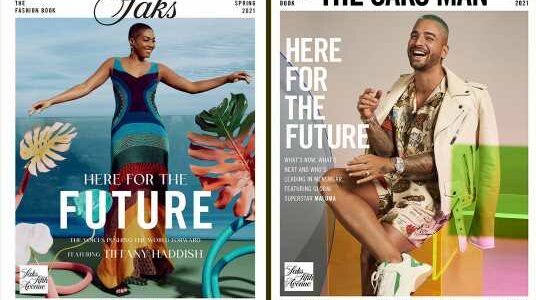 The overall campaign, titled “Here for the Future,” emphasizes Saks’ focus on the future through its merchandising assortment, designer relationships and business strategies.

“We really use this as an opportunity to solidify our position as an arbiter, not just of fashion, but of culture and lifestyle. We’re using this opportunity to highlight people we think are here for the future and are creating the future,” said Emily Essner, the retailer’s chief marketing officer.

The spring book features an array of designers who push boundaries, such as A-Cold-Wall, BruceGlen, Amiri, Christopher John Rogers, Farm Rio, Kimberly Goldson, Reese Cooper and Tove. The campaign highlights Saks’ ongoing efforts to expand its fashion offering and provide a distinct assortment to its customers.

For the cover of the women’s book, Haddish is styled by Law Roach and photographed by Djeneba Aduayom, wearing a Gabriela Hearst crochet dress. Maluma  appears in an Amiri look on the cover of the men’s spring book. He was styled by Ugo Mozie and shot by David Slijper.

The women’s book contains Saks’ It List, a forecast of the season’s trends such as easy breezy dresses, statement earrings and knit dressing. The men’s book features Need Now, with trends such as loungewear, high-top sneakers and sport luxe. 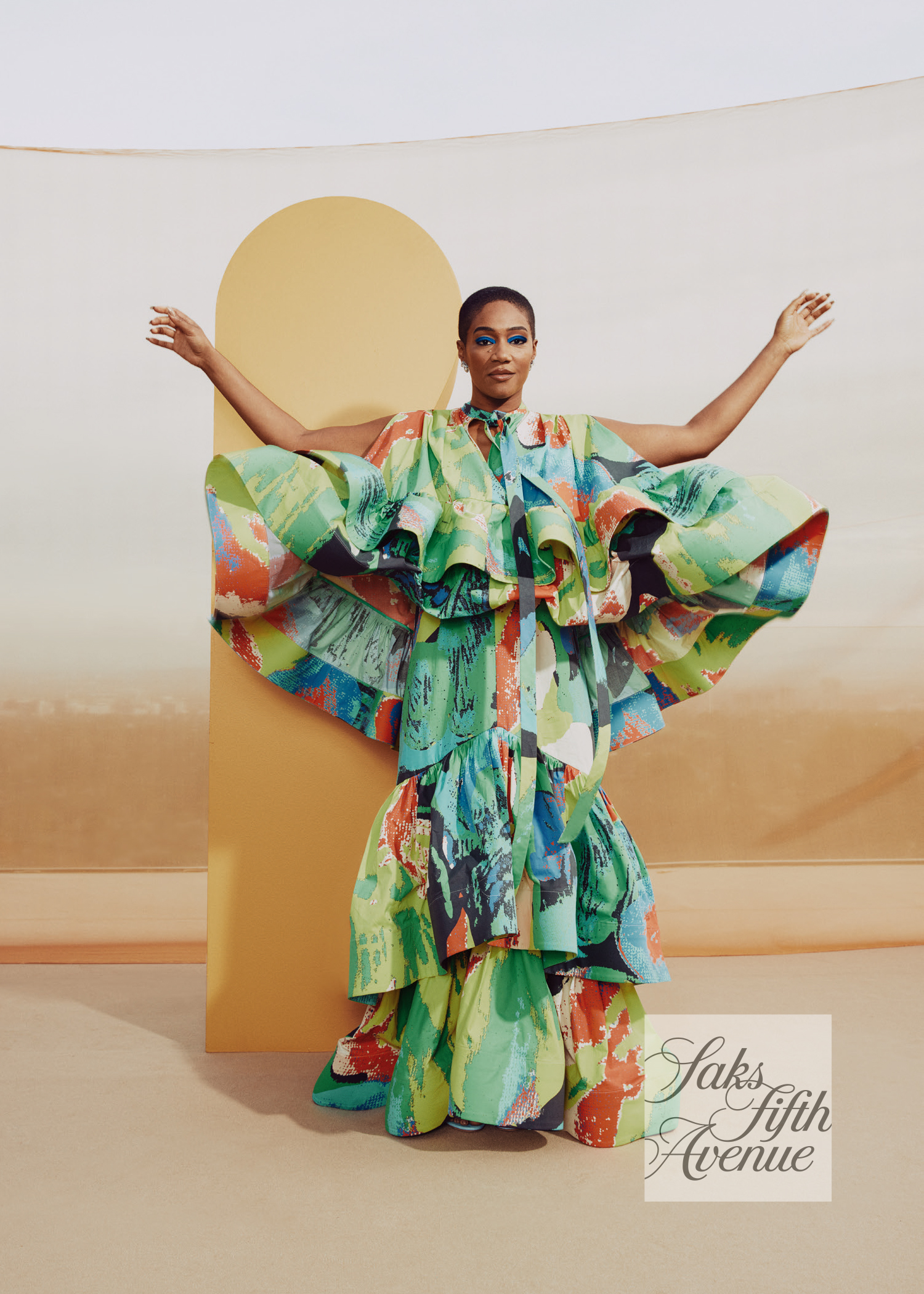 The campaign will run across Saks’ print and digital channels, as well as in the Fifth Avenue windows of the Saks New York flagship. The windows, which went up Feb. 11, showcase fashion from Fear of God Exclusively for Ermenegildo Zegna, Maison Marginal, Max+min, and Plan C, among others. They will be on display through Feb. 25. The women’s and men’s spring books are mailed to customers and will be available in the Saks store or online at saks.com/c/content/catalogs on Feb. 18. Haddish and Maluma will also share the campaign on their social channels.

Asked how she decided which designers to feature, Roopal Patel, senior vice president and fashion director at Saks, said, “Over the past year, we’ve been very focused on new and emergent brands that have been showing collections in unique ways and shaping the future of the industry. That message for spring is ‘Here for the Future’ and it really celebrates forward-looking designers, artists and activists who are shaping the industry.”

She added, “It’s so important now more than ever that we support this next generation of talent and utilize this platform to elevate them and help share their vision with the Saks customer.”

She said when they started conceptualizing the spring campaign, it was a reflection of what designers were showcasing down the runway. “There was such a sense of optimism and joy for better and brighter days ahead than what we saw in New York, London, Milan and Paris. The clothing that we’re seeing is a reflection of the designers’ voices.”

As for the key trends, Patel said there’s a new spin on knit dressing that takes women out of their sweatshirts and track pants. “There’s pajama dressing that’s a bit more elevated and you can transfer from a Zoom call to entertaining at home,” she said. There were also references of crochet and raffia within accessories.

For the spring book, Haddish spoke with Saks about the She Ready Foundation, her relationship with foster youth and what helps get her through difficult times. She recently unveiled the second season of “Tiffany Haddish Presents: They Ready” on Netflix. She is seen in the look book sporting designs by Akris, Christopher John Rogers and Monse.

For the men’s book, Maluma discussed his foundation, El Arte de los Sueños, and the importance of giving at-risk youth creative outlets and opportunities. Having just released a hit album,” 7 Días En Jamaica,” he will make his debut as an actor in “Marry Me,” with Jennifer Lopez and Owen Wilson in 2022. Maluma was photographed in the book wearing men’s wear from A-Cold-Wall, Dries Van Noten and Saint Laurent. 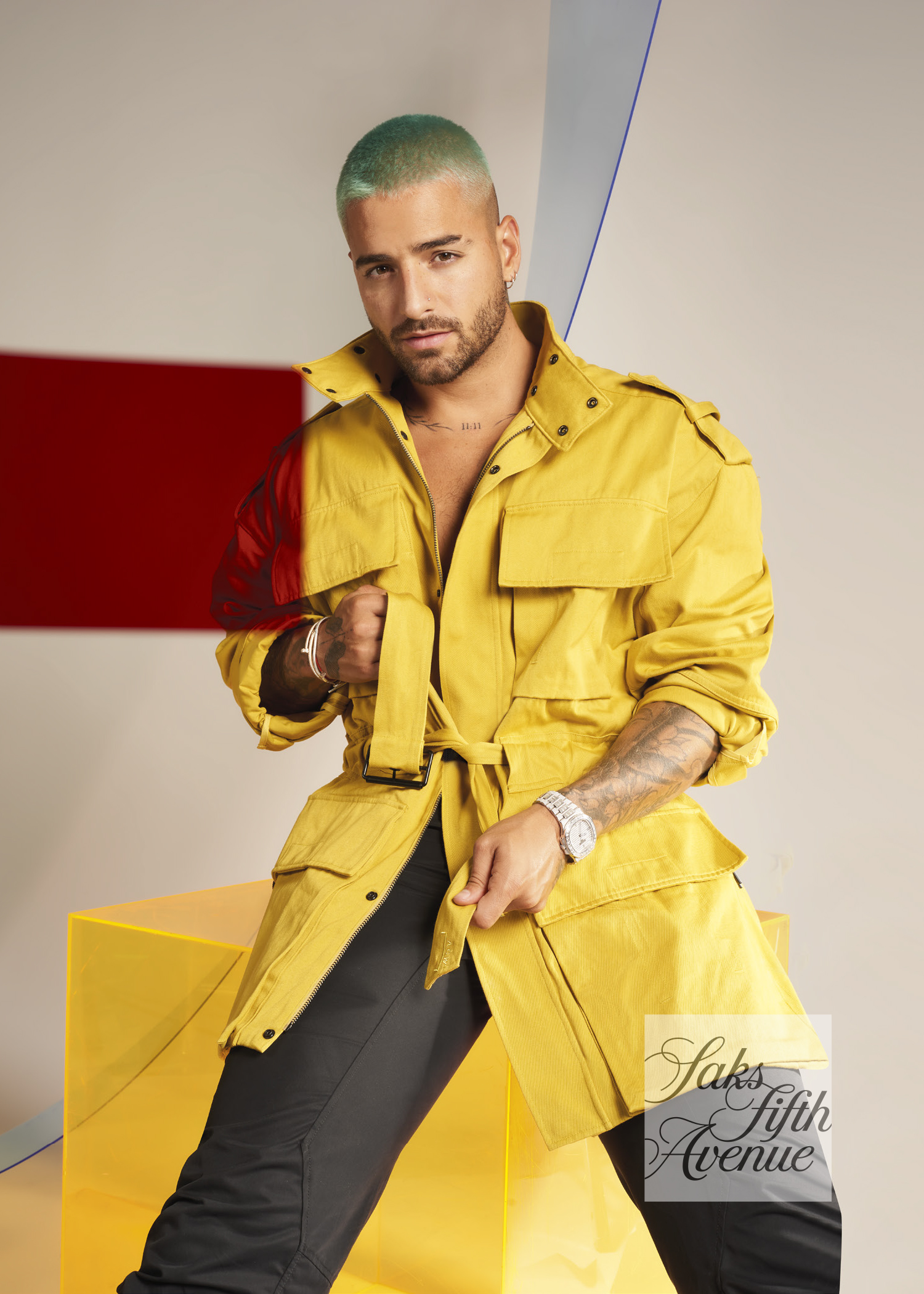 Asked about current business and traffic in the stores, Essner said, “Overall, we’re cautiously optimistic with what we’ve been seeing. Our online business has been strong and continues to be strong. We launched the new site back in October, which is all about personalization and fashion and we’ve seen great results there. We’ve been working on the in-store experience…whether that’s introducing virtual appointments or before or after hours appointments for customers, a lot of new services.”

Inside Barneys at Saks: A First Look