(CNN)James Bond, the fictional British secret agent, has driven lots of different cars in the more than two dozen films in the series. They’ve included everything from BMWs and Bentleys to Chevrolets and Fords. But one car in particular, the 1964 Aston Martin DB5, is known as the “the Bond car.”

The Bond car that the late actor Sean Connery first drove in the 1964 film “Goldfinger” was an Aston Martin DB5 replete with gadgets like machine guns, an ejector seat and an oil slick maker. More than 50 years later, Connery sought out a 1964 DB5 for himself and, after looking for over a year, finally bought one — without the movie car’s guns and gadgets — in early 2018. Connery died almost two years later at the age of 90. His DB5, the only one he ever actually owned, will be offered for sale at an auction this summer.
The car is expected to sell for between $1.4 million and $1.8 million, according to the auction company Broad Arrow Group. The car will be offered at Broad Arrow Group’s Monterey, California, auction on August 18, the company told CNN Business.

A 1964 Aston Martin DB5 in this car’s pristine condition would ordinarily be worth about $1 million even if Connery had never been anywhere near it, according to Hagerty. (Hagerty, a company that tracks collectible car values, is also a major investor in the recently founded Broad Arrow Group.)

DB5s associated with the James Bond films have sold for vastly more than that, though. A gadget-filled DB5 that was used to promote the film’s original release sold for $6.4 million in 2019.

During his life, Connery had often told his children of his fond memories of driving the Aston Martin in films, his son Jason Connery said in an interview. When they were grown they suggested to their father that he buy one, but he was resistant to the idea.
“He’d say, ‘I don’t want to because it feels a bit obvious, you know, with me,'” Jason Connery said. “I said, ‘But forget it, it’s not about that.'” 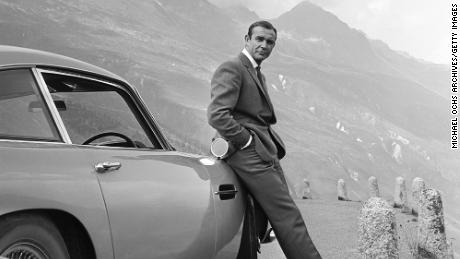 Barney Ruprecht, an Aston Martin specialist with Broad Arrow who had also consulted with Connery on making the purchase, advised Connery against getting a car in need of restoration since the work would probably take a couple of years, he said. Instead, he and Connery sought out a car that was in as near-perfect condition as possible. The car remains in very nearly that condition, according to Ruprecht, with only some creases in the seat leather as evidence it has been sat in.
Once Connery purchased the car, he had it repainted from black to Snow Shadow Gray, the color of the movie car. In the films, the car is described as being painted a color called Silver Birch, but the film was shot using a prototype of the DB5, not an actual production car. Silver Birch, a color that was offered on production versions of the DB5, wasn’t available at the time, Ruprecht said, so the car was painted in the slightly flatter, less metallic shade of gray that was offered on the DB4. The two colors would have been nearly indistinguishable on film, though, he said.
But after that work was done, there was little time left to actually drive it.
“Unfortunately as he got older, traveling, especially to Europe [became difficult] and then COVID hit and…,” said Jason Connery. “You know, unfortunately, he never really got to enjoy the car that he’d bought.”
The car was kept by Connery at his home in Switzerland, according to Jason Connery. He was so fond of the car, he kept a photo of it on his desk.

A portion of the proceeds from the sale will go to support the Connery Family Philanthropy Fund, according to the Broad Arrow Group, though the percentage going to charity will be announced later. In addition to the car itself, the winning bidder will get a ride in the car from the famous retired Formula 1 racing driver Jackie Stewart.
Stewart, like Connery, is from Scotland, and the two were longtime friends.
Source: Read Full Article