See how Burmese are using non-violence to protest coup

Hong Kong/Seoul (CNN Business)Japanese companies bet on Myanmar years ago as the Southeast Asian country emerged from decades of military rule. But this week’s coup has already ended one of those deals.

Brewing giant Kirin (KNBWY) said on Friday that it is ending a six-year-old joint venture with a holding company in Myanmar that is linked to the country’s military. The army this week seized power in a coup, detaining the country’s civilian leader Aung San Suu Kyi and numerous other top government figures.
Kirin is “deeply concerned by the recent actions of the military in Myanmar,” the company said in a statement, adding that it had “no option but to terminate” the partnership. 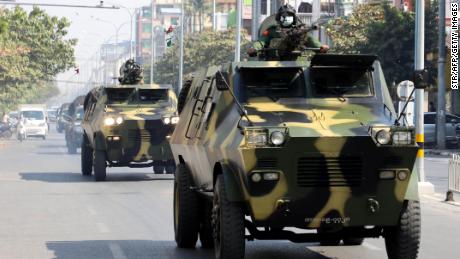 Its local business partner and co-owner is Myanmar Economic Holdings Public Company Limited, a firm which the UN Human Rights Council and others have pointed out is owned and operated by the Tatmadaw, the country’s powerful military.

“We decided to invest in Myanmar in 2015, believing that, through our business, we could contribute positively to the people and the economy of the country as it entered an important period of democratization,” Kirin said Friday.
Japanese companies have been investing heavily in Myanmar for more than a decade. Nissan (NSANF) opened a production facility there, while the Japanese investment bank Daiwa Securities (DSEEY) and the Tokyo Stock Exchange were tapped to help build Myanmar’s first stock exchange. Daiwa told CNN Business that almost all of the company’s 10 staff members returned to Japan because of the coronavirus pandemic. It added that its business ventures in Myanmar are operating “as usual.”
Myanmar isn’t a major beer market for Kirin. Myanmar Brewery contributed just 1.8% of Kirin’s revenue through the first nine months of 2020, according to its most recent earnings report.
But it was a fast growing one. Beer consumption in Myanmar rose by 16% in 2019.
Pressure on Kirin to drop its business ties in Myanmar had been growing even before this week’s coup. A military crackdown against the ethnic Rohingya Muslim population in the country, which bore “the hallmarks of genocide” according to the United Nations, has been widely condemned.
Suu Kyi’s handling of that crisis has also been criticized. (Myanmar has denied the charges and has long claimed to have been targeting terrorists.)

A few years ago, Amnesty International raised concerns about whether donations made by Myanmar Brewery were used to benefit the country’s military. And in 2019, a United Nations independent fact-finding mission released a report claiming that Myanmar’s military had been using its business ties to support its “brutal operation against ethnic groups.”
Kirin has since been investigating its operations in the country, and last November suspended dividend payments to the Myanmar holding company.
Source: Read Full Article