Think that team with a lower seed is a poor choice to advance in your NCAA Tournament bracket? You may want to rethink that strategy.

Peaking as the postseason nears is the goal for men's college basketball teams. As the calendar turns to March, that's undoubtedly true as conference tournaments begin and every result counts for seeding on Selection Sunday.

While the NCAA Tournament is largely about the matchups and seeding lines, the late-surging teams have been winning toward the end of the season for a reason. That momentum means they're hot and playing their best basketball when it counts. It also makes their seed deceiving.

Six teams that are sleepers to go far in March Madness based on their winning momentum and potential to far outplay their seed:

No. 7 seed: The Huskies (15-7) played themselves off the bubble and are just beginning to hit their stride. That’s largely due to the return of leading scorer James Bouknight (20.2 ppg), who missed eight games with an elbow injury. This team only lost twice in the regular season with Bouknight in the lineup and that’s what makes Connecticut so dangerous since its seeding would’ve been much higher if Bouknight didn't have to sit out. Coach Dan Hurley has revived this storied program in a short time, and a year in the Big East only bolstered the Huskies’ prowess. They hammered DePaul by 34 points in their return to the Big East tournament.

MEET THE 68 TEAMS:  In-depth look at every team in the field

CREATE YOUR POOL! Sign up, invite your friends and dominate your way to a title 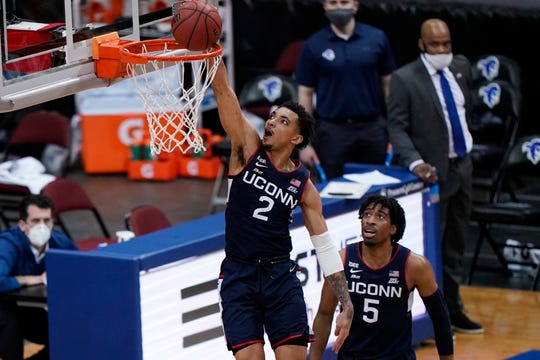