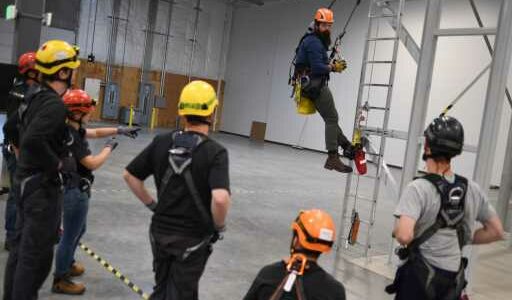 The demand for wind-energy workers is expected to surge in the next few years, and Colorado could be a major training ground for an industry looking to meet the need.

Workrise, a workforce management company, recently opened a 56,000-square-foot center in Broomfield to train qualified workers for the wind industry. The company, based in Austin, Texas, plans to expand the training to solar energy and other trades, a key reason for such a large facility.

Workrise, formerly named RigUp, started out in oil and gas and saw the opportunity to expand into wind and solar, Elliott said. The 7-year-old company also provides training and job placement in the defense and construction industries.

With renewable energy, Elliott said, Workrise sees not only the opportunity to help people upgrade their skills and advance in their careers, but also a chance  to help fill “a huge skilled trades gap coming in the U.S.”

The shift to more renewable energy, along with efforts to cut greenhouse-gas emissions to lessen the impacts of climate change, is driving demand for skilled workers, according to a recent report by the American Clean Power Association. Slashing carbon emissions by at least 50% by 2030, as the Biden administration has pledged, will require significant job growth over current projections, the report by the industry organization said.

The wind industry has the greatest job growth potential, with both onshore and offshore wind farms expected to create 2.5 million to 3 million job-years over the next decade, according to the report.

A job-year represents one year of work for one person. A construction job that lasts five years would be five job-years.

The wind industry in Europe estimates that it will need 150,000 additional employees in the next decade, said Shawn Lamb, director of training for Workrise.

“If you put those numbers in U.S. terms, we’re talking hundreds of thousands of workers,” said Lamb, who headed U.S. operations for the Danish Wind Power Academy Americas.

Workrise’s goal is to train 100,000 workers by 2023 and 1 million workers by 2030. The company has quickly expanded its focus. Approximately 80% of the trainees in 2019 were in oil and gas. In 2020, the breakdown was a third each in construction, renewables and oil and gas.

The American Clean Power Association report said wind turbine technicians made an average of $59,340 in 2020, 5% higher than the national average. Elliott said people can earn more as they advance to different levels.

Lamb said the company, which has about 70 offices across the country, chose the Denver area for the training center after acquiring Harvest Energy Services, a wind energy company in Boulder.

“There are a lot of renewable energy clients in this space, too. It’s central to the U.S.,” Lamb said.

And it’s about a 25-minute drive to Denver International Airport.

More than 100 people have gone through the two-week Workrise sessions since the Broomfield center opened earlier this summer. Andrew Glennie signed up and has been working as a turbine blade technician at a wind farm in Bliss, N.Y., for about two months.

“It’s definitely something I had not considered before. It came out of left field, but everything is just clicking for me,” Glennie said.

The 41-year-old Glennie earned a bachelor’s degree in fine arts and later went to school for auto body painting. He worked in a custom auto shop and in collision repair. He also worked in construction, remodeling and large-scale metal fabrication.

At Workrise, Glennie went through a week of training centered on standards developed by the European-based Global Wind Organisation. Students go through extensive safety exercises on a 30-foot structure that simulates different parts of a wind turbine. They get into their safety gear, including a full-body harness, ropes and anchors, to go through the paces of rescuing someone or themselves.

“We’re our own first responders in the field,” Lamb said.

Trainees go through a mock evacuation of a nacelle, the Winnebago-sized structure at the top of the turbine that houses the generator and other equipment and is at least 300 feet, or roughly 28 stories, above the ground. They also practice saving someone who has slipped on the ladder inside the turbine’s tube.

In his second week, Glennie worked on repairing turbine blades in a special unit built in the training center. The air inside must be a certain pressure. The work tables are equipped with a vacuum to suck up the dust, which otherwise could be a safety hazard.

A technician usually repairs a blade, which is made of fiberglass and resin, up in the air. Blade technicians are a hot commodity, Elliott said. “Every time we’re ready for more folks to go out and work, they’re gone.”

That was the case for Glennie, who was living in Texas before his training. Workrise immediately found a job for him. He said he felt “100% prepared” for the work that he can see staying in for a while.

“I feel like I found the job that just checks all the boxes,” Glennie said.

People don’t pay for the training. Workrise employs the workers and covers their expenses when they’re away from home. The company’s paying clients are the businesses and utilities that own the sites where the people work.

In a blog, Workrise co-founders Xuan Yong and Mike Witte said the company started as a platform similar to an Angie’s List for oil and gas companies. They saw that matching individual workers to jobs was a big draw for skilled laborers grappling with a “clunky worker-staffing model.”

The goal is to make it easier for workers to find work and companies to find the employees they need, Yong and Witte said.

After starting but not finishing nursing and cosmetology programs and working for FedEx, Kayla Contreras went through wind training at a school in Oklahoma and then the Workrise training in Broomfield. The 22-year-old was hired for a job at a wind farm in Iowa and has moved on to a second work site in the state.

“I love working. I’ve worked since I was 15 years old,” Contreras said. “I feel like it’s a perfect fit for me because I like to always go, go, go.”

For now, Contreras doesn’t mind moving around. She said Workrise pays a per diem for expenses and pays for flights and hotels.

“To be based in one spot is possible,” Contreras said. “I don’t mind the traveling. I would love to keep exploring other places and experience as much as possible.”