The Amazon Union Election Results Could Get Really Messy

Amazon warehouse workers in Alabama are wrapping up the most closely watched union election in decades. Following a seven-week mail-in voting period, a count will begin on Tuesday to determine whether the Retail, Wholesale and Department Store Union has won the election and represents nearly 6,000 workers at the facility.

The union needs a simple majority of votes cast in order to win. But it could be days or weeks before that initial tally is known, and much longer before the election is fully settled under the National Labor Relations Board. Much like the presidential election last November, everyone should be prepared for a long window of uncertainty well after the counting begins.

Union elections often lead to ballot disputes and claims of “unfair labor practices,” where one side accuses the other of breaking labor law during or ahead of the election. The Amazon vote could lead to an especially long legal fight because of the sheer size of the workforce, the contentiousness of the election and the enormous stakes for both sides.

Amazon ran a lengthy anti-union campaign at the warehouse. The union would have been taking careful notes on any tactics that got close to legal lines. RWDSU organizers have accused Amazon of misleading workers throughout the campaign, and depending on how the vote goes, the union could file a litany of objections to Amazon’s conduct during the election. 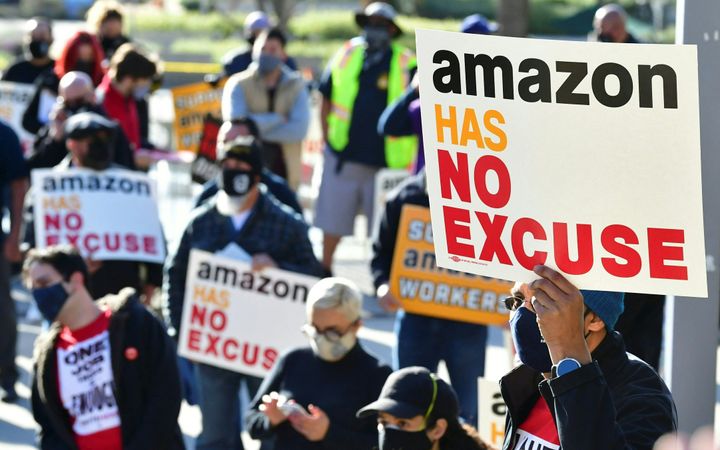 Ballots Will Be Challenged

Even before NLRB officials count the votes, both sides have an opportunity to challenge ballots cast by individual workers. Many ballots may end up set aside and not counted in the initial tally because either the union or Amazon questions a worker’s eligibility to vote. Because there may be likely thousands of ballots to go through, the ballot challenging process alone is expected to take several days when it starts on Tuesday.

If the number of challenged ballots is relatively small, it may not end up mattering. Officials will count the unchallenged ballots, and it’s possible either the union or the company will lead by such a large margin that the ballots set aside aren’t even opened. But if the election is close and includes many challenges, those ballots could end up determining who wins. The NLRB would hold a hearing to determine voters’ eligibility, adding more time before it was clear who won.

The high turnover at Amazon’s warehouses could come into play in the ballot challenges. People get fired or quit so frequently that either the company or the union could claim that a certain worker should not have been able to vote even though they received a ballot. It’s also possible that the union would challenge the eligibility of certain job classifications to vote, arguing that some workers who got ballots are really supervisors who aren’t supposed to be included in the bargaining unit.

For instance, the union could challenge the ballots cast by workers classified as “process assistants.” These are workers who appear to have some supervisor-ish duties. During an online town hall hosted by Amazon in early March, one process assistant said she was voting against the union in part because it would make it harder for her to “discipline” other employees.

“Part of what I do would not be possible, because technically what I do is a form of discipline,” the employee said in the forum, which was broadcast on Facebook. “When a union comes in … you have to have a union person present [for discipline]. Somebody would have to be assigned to walk around with me all day. I’m not interested in that whatsoever.”

The NLRB considers someone a supervisor if they discipline other employees and use “independent judgment” in doing so (i.e., they aren’t just carrying out orders from a higher-up). One worker at the warehouse, who spoke on condition of anonymity for fear of reprisal, said he doesn’t believe the votes of process assistants should count. “I’ve seen them as managers,” he said.

The union may end up challenging those ballots, leaving NLRB officials to take a closer look at process assistants’ job duties. The RWDSU declined to comment when asked by HuffPost if it planned to do so. An Amazon spokesperson said that process assistants are hourly workers who support salaried managers, and that despite what the employee said, the term “discipline” doesn’t accurately describe their responsibilities.

Ballot challenges are just one small piece of the legal wrangling that could start this week. If the union comes up short in the vote count, it will almost certainly file a host of objections to Amazon’s conduct, asking the NLRB to set aside the election results. (Amazon could do the same against the union if the company loses, though so far Amazon hasn’t complained publicly about the union’s conduct.)

If those objections are filed, they are almost certain to include the placement of a U.S. Postal Service mailbox at the warehouse during the election. That mailbox is surrounded by a tent and Amazon signage urging workers to vote. The AFL-CIO’s general counsel has said the mailbox amounts to Amazon trying to “assert control over the mechanics” of the election. The union has accused Amazon of surveilling the mailbox. Amazon says the mailbox was the Postal Service’s idea.

But Amazon held so many anti-union meetings with workers, and supervisors had so many discussions with workers about the election, that the union is bound to have more accusations that the company ran afoul of the law. These disputes could lead to a post-election hearing with the NLRB’s regional director, in a drawn-out process that could take months. That director could find that Amazon’s conduct was so bad that the results should be set aside and another election should be held.

It’s also possible that the challenges end up before the NLRB board in Washington on appeal. The NLRB is a five-member independent board that acts as a kind of high court for settling labor disputes. It currently has only four members, with a 3-1 Republican majority held over from the Trump era. Board members are confirmed by the Senate.

If a dispute with the Amazon election ends up before the board, it could order a new election to be held, or even order Amazon to start bargaining a contract with the union, if it found Amazon’s behavior so egregious. But the outcome in such a case could hinge on the board’s political makeup when the case is heard.

Republican majorities tend to favor employers in contentious cases, while Democrats are far more likely to rule for unions. The board is still in Republican hands, but perhaps not for long. The next GOP seat comes vacant in August. If President Joe Biden and Senate Democrats fill that seat and the one that’s already vacant with Democratic members, the board would have a new 3-2 Democratic majority. The litigation surrounding a messy election could easily stretch into the latter half of this year.

Biden has already done the Amazon workers in Alabama a favor by speaking out to condemn anti-union campaigns by employers like Amazon. If he wants to maybe help them again, he would want to move quickly to fill any open seats at the labor board.